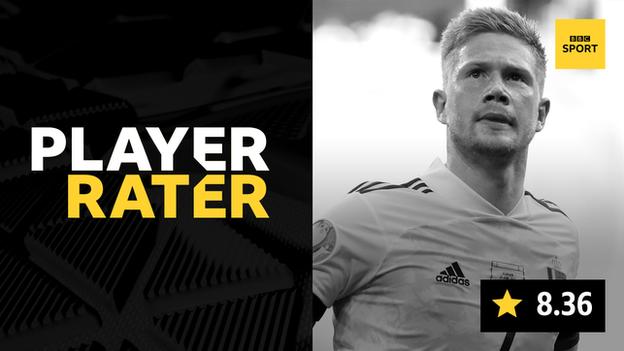 The group stage at Euro 2020 has drawn to a close so it's time to take a look at which players have impressed you the most.

Throughout the European Championship matches so far we have been asking BBC Sport readers to score each player involved out of 10.

Based on players who featured for at least 60 minutes in two of their nations' three matches, we have worked out your team of the tournament to this point.

Belgium's Manchester City midfielder Kevin de Bruyne ranks highest of all players with an average score of 8.36, but there's no room in the team for top goalscorer Cristiano Ronaldo - or any players from England, Scotland and Wales... 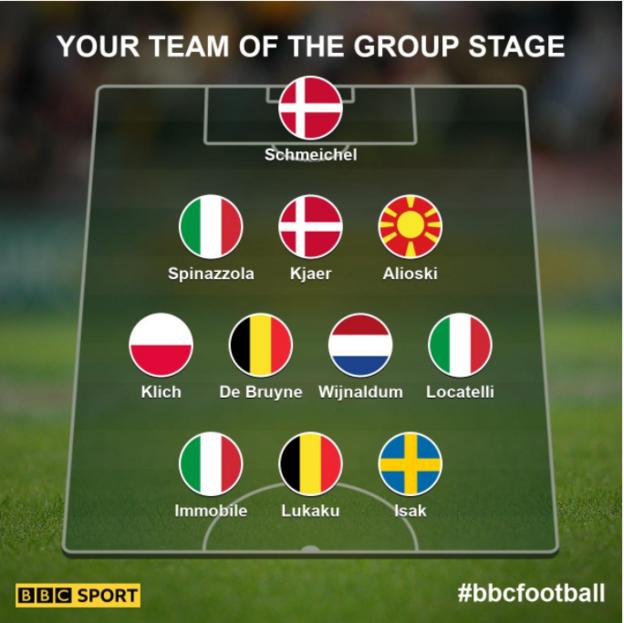 Denmark's Kasper Schmeichel is the highest scoring goalkeeper with an average of 7.41, which is enough to see him beat Wales' top-rated player Danny Ward (7.18).

Schmeichel is joined in your side by team-mate Simon Kjaer, whose average of 7.75 sees him rank third among defenders behind North Macedonia's Ezgjan Alioski and Italy's Leonardo Spinazzola.

Leeds United's Alioski is, perhaps surprisingly after his side finished bottom of Group C with three defeats, the second highest scorer overall with 8.19, while Spinazzola managed 7.77.

Spinazzola is one of three players selected from Roberto Mancini's impressive Italy, who won all three of their Group A games, along with midfielder Manuel Locatelli (7.8) and forward Ciro Immobile (7.74).

Locatelli is joined in a midfield four by Belgium's De Bruyne, the Netherlands' Georginio Wijnaldum (8.06) and Poland's Mateusz Klich (7.81) - also of Leeds United - despite his side's bottom-placed finish in Group E.

That means there's no room for Ronaldo (7.2), who has scored five goals in three games and equalled the men's international goalscoring record on Wednesday.

For the home nations, Wales goalkeeper Ward comes closest to making the XI, while you have also scored Kalvin Phillips as England's top performer on 6.53 - and Andy Robertson (6.06) leads the way for Scotland.