Praised by AC-12, picked out by Jose Mourinho, lauded by the First Minister and very likely celebrating by baking cakes in the kitchen of the Scotland squad's hotel.

If fans in England didn't know much about Stephen O'Donnell before, they might well have been cursing him as he walked off the Wembley pitch after Friday's goalless draw.

O'Donnell was the unlikeliest candidate to be a national hero. Criticised - unfairly in the eyes of head coach Steve Clarke - for his performance against the Czech Republic on Monday, many didn't even expect the Motherwell right-back to keep his place against the English.

But, after his swashbuckling display in London, BBC Scotland finds out more about Scotland's steadfast right-back...

The 2-0 defeat by the Czech Republic did little to instil confidence in many of the Tartan Army. Afterwards, O'Donnell was singled out by some on social media as having a nervy display before being substituted.

Indeed, many were clamouring for Rangers' rookie right-back Nathan Patterson or Celtic winger James Forrest to be selected for the trip to face England.

"Analyse the game before we start killing players just because of who they are and where they play," said Clarke pre-match of the man he managed at Kilmarnock.

The Scotland head coach stuck with O'Donnell for Wembley, and his faith in the 29-year-old was repaid, and then some. Raheem Sterling was reduced to just five touches in the Scotland box - none of which were shots - and substitute Jack Grealish rarely threatened either.

Furthermore, O'Donnell raided effectively down the right. And if it wasn't for a tremendous save from Jordan Pickford, his first-half volley in the first half could very well have delivered an even more celebrated Scottish result.

"I think what's frustrating, in society now you see everything, you catch it and it's hard to get away from it," O'Donnell told BBC Scotland post match.

"It's tough. At 29 you think it's easy but this is all new to all of us, and I'm just glad I was able to repay, most importantly, the manager."

'Role model to inspire next generation'

O'Donnell's performance in what was his 19th cap brought praise from all quarters, not least his manager, who told BBC Scotland he "should have started the interview with two words: Stephen O'Donnell. He was outstanding".

The Scotland head coach was not the only one to be impressed either. Captain Andy Robertson was one of several of his team-mates to give him an unprompted name-check in their post-match interviews.

Line of Duty actor Martin Compston got in on the act, too; Roma boss Mourinho made reference to what would have been an "amazing goal"; and Nicola Sturgeon even gave him a special mention. 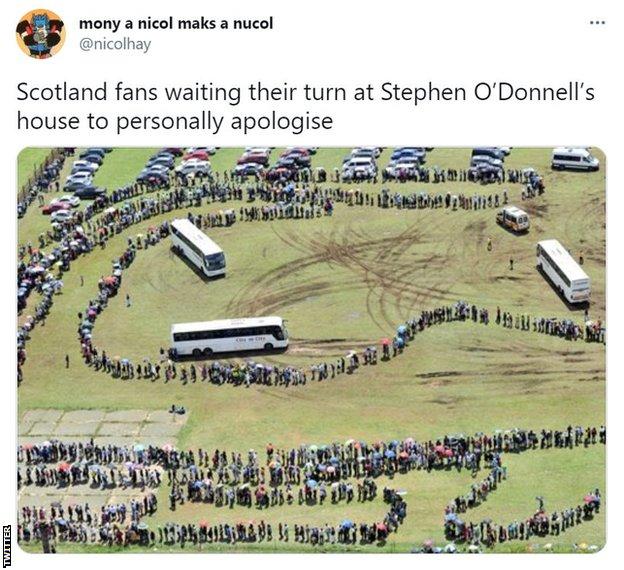 The man, the brother & the wizard in the kitchen

While the likes of Kieran Tierney, Andy Robertson and Scott McTominay are known worldwide because of their roles at Arsenal, Liverpool and Manchester United, O'Donnell's cult status is generally reserved for those with an ML1 postcode.

Amazingly, this time last year the defender was technically unemployed. After ending his spell at Kilmarnock, the right-back's future was unclear and he trained with Hamilton Academical to keep himself fit.

Just a few days into last season, a deal was struck with hometown side Motherwell, with O'Donnell going on to help Scotland earn their Euro 2020 place with victory in Belgrade three months later.

"I needed to be playing to have a shot," O'Donnell, who spent two years at Luton Town before returning north to Kilmarnock, told BBC Scotland prior to the tournament. "I actually thought I might have left it too late to get in."

However, his bond with Clarke is long standing. Among other things, he talks about his manager's promise to allow him to attend his brother Mark's ordination as a priest regardless of football commitments during their time at Rugby Park, only for Clarke's successor Angelo Alessio to forbid him to go.

"He's kept picking me," said O'Donnell, who made his international debut under Alex McLeish. "At times my form has maybe merited it, at times maybe not. So for him to always trust me it makes a big difference."

As well as keeping Sterling quiet, the defender has also been known to have a whisk or rolling pin close to hand. O'Donnell's passion away from the pitch is cooking, with the Scotland squad familiar with his creations.

"I love baking and that," he beamed. "If the chef lets me in the kitchen at the hotel, maybe I'll whip up a wee tray, but there's no dramas."

No dramas at all.