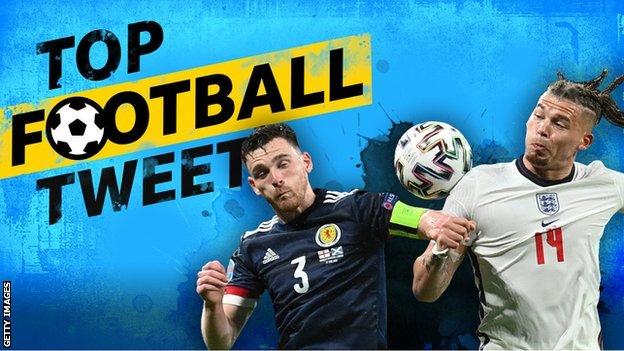 The atmosphere at Wembley for England v Scotland did not disappoint.

It was an historic occasion: England playing Scotland at an international tournament for the first time since Euro 1996. The venue: Wembley.

The match ended honours even and Scotland might have been happier with the performance on the night, while England are still in a strong position in the group. Either way, the fans of both home nations certainly added to the occasion.

This is what it means

This fixture has pedigree.

BBC Scotland were here to offer a tongue-in-cheek history lesson to anyone uninitiated.

Slippy surface out there

Before the match, thousands of Scottish fans descended on London. The wet weather didn't dampen spirits and definitely gave things a bit of zip. We hope that young man is okay.

Looking forward to it like a trip to the dentist

Alan Shearer didn't miss an opportunity to invoke the last time that England and Scotland played one another at an international tournament.

At Euro 1996, Paul Gascoigne scored a sublime goal after flicking the ball over Colin Hendry and thus was born the infamous 'dentist's chair' celebration - a reference to a controversial night out for the England team involving a swivel chair and a bottle of vodka.

David and Romeo Beckham were in attendance at Wembley and a lot of eyes will have turned to Beckham junior's Phil Foden/Gazza inspired new do.

Lion defects to the other side

Eight year old lion, Boy, successfully predicted that England would beat Croatia in their opening game. He didn't manage to repeat his success this time.

One pundit went early with a massive prediction.

Can someone with more pooch expertise than us please ID this dog? Surely that's not a Scottish Highland Terrier in an England shirt?

James Milner managed to articulate the feelings of lots of onlookers who might have felt split loyalties.

This young lady had split allegiances. Gretna Green starts somewhere by the nose.

Open for a surprise

We're still reeling from the shock that Scott Brown is typically bald by choice and then we see he has a left foot this big!

No surprises there then

We're not sure anyone would have got good odds on this happening before the match.

One of the key battles of the match was between two Chelsea lads.

It was a bit of a scrappy, edgy one in the end, but you probably couldn't call the game boring.

A lot of love for the gaffer

England could have done with Sporty Spice on the pitch

The final result was perhaps best summed up by Mel C.

And this was a very sporting response from one of the Scottish crowd.