Just two years after finishing third in the Scottish Premiership under Steve Clarke, Kilmarnock's 28-year top-flight stay is over.

The Ayrshire club flirted with relegation on several occasions throughout their time in the top tier, but it all came to a shuddering halt in an abject play-off defeat by Dundee.

But how did they go from the high of finishing as Scotland's 'best of the rest' to being consigned to second-tier football in the space of 24 months?

When Clarke stood on the Rugby Park pitch on the final day of the 2018-19 season after victory over Rangers secured Kilmarnock's highest finish since 1966, everything was rosy despite him leaving to take the Scotland job the following day.

Italian coach Angelo Alessio was named as Clarke's successor four weeks later and got off to the worst possible start when his side were dumped out the Europa League by Welsh minnows Connah's Quay Nomads.

Despite sitting fifth in the Premiership, there were rumours of unrest within the Kilmarnock camp and the former Chelsea, Juventus and Italy assistant was shown the door after just 22 games in charge.

"It was a complete rip up of a squad built under Steve Clarke," said Stephen O'Donnell, Motherwell's former Kilmarnock defender.

"One of my first conversations with him [Alessio] after I came back from international duty was, in broken English, we weren't playing with tactics. When you make bold statements like that then there's going to be unrest."

Alex Dyer, who worked under both Clarke and Alessio, took interim charge following the Italian's sacking in December 2019.

Despite losing all three games as caretaker, Dyer was confirmed the club's new manager until the end of the campaign, raising further questions about the Ayrshire side's contingency planning.

Kilmarnock would finish the curtailed 2019-20 season in eighth, with Dyer winning only three of his 12 games while recording a points-per-game ratio of just 0.83.

However, the Rugby Park hierarchy saw enough in the 55-year-old to offer him a two-year-deal.

The Englishman failed to register a victory in the first five games of this season, but a run of three successive wins throughout September and October had them sitting fifth after 10 games.

But just three victories in the following 15 league fixtures led the Kilmarnock board to remove their manager from his position in February with the club in ninth - four points above the relegation play-off spot. 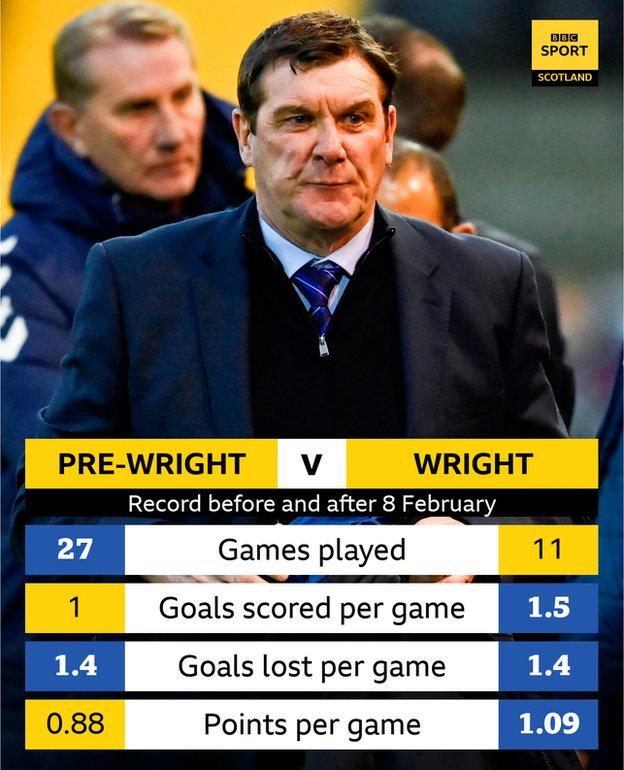 Dyer's final game was a 3-2 loss to St Johnstone and two defeats followed under the interim stewardship of head of football operations James Fowler.

The club were in 10th position when he took over in February - four points clear of Hamilton Academical at the foot of the table.

It took until his fourth game to gain a point - against Dundee United at home - and a further two games to secure his first win - an emphatic 4-1 victory over Motherwell.

That dragged Wright's men off the bottom of the table and offered hope for the Kilmarnock faithful - but it was shortlived as just two league wins followed.

The signing of Kyle Lafferty looked a shrewd acquisition, with eight of Kilmarnock's last 17 league goals coming from the striker.

But ultimately, not even the Northern Irish duo - who momentarily allowed Kilmarnock fans to dream - could save them from relegation.

The problem is the squad hasn't been reinvigorated since Clarke left. They've been on a downward trajectory. Had Wright and Lafferty come in earlier, perhaps they could've got out of it. Is Lafferty going to stick around in the Championship? I think there will be a few clubs looking at him.

Losing 23 players out of contract will be tough. Every team has its cycle, it runs its course. You've seen that with this Kilmarnock team. It's an ageing side that brought lots of success, but that's gone now. They need to move on.