Kilmarnock are in a "strong position" heading into their Scottish Premiership relegation play-off against Dundee, says manager Tommy Wright.

The Ayrshire side were consigned to 11th spot despite beating Hamilton Academical 2-0 on the final day.

Ross County's win at Motherwell means they face Dundee on Thursday, then next Monday, in a bid to preserve their 28-year top-flight status.

"I can't ask any more from my players," Wright told BBC Scotland.

"When I came in [in early February], I thought 36 points would have been enough. Unfortunately, it isn't. But we can take this performance and the performances in the last 10 games into the play-off.

"Dundee have had a good season but we'll concentrate on ourselves and I'm pleased with how we are playing. I think we're in a strong position going in."

Reasons to be cheerful?

So, is Wright right to be optimistic? His side's form would suggest so - they have lost just two of their last 10 in all competitions, winning five. That has been in large part down to their improvements in attack.

Kyle Lafferty has netted 12 goals in all competitions since joining on a free transfer just after Wright replaced Alex Dyer, with Mitch Pinnock, Chris Burke, Rory McKenzie and Greg Kiltie chipping in with nine combined since February.

The Ayrshire outfit have scored 26 goals in their last 10 games, and will no doubt pose Dundee plenty of problems. 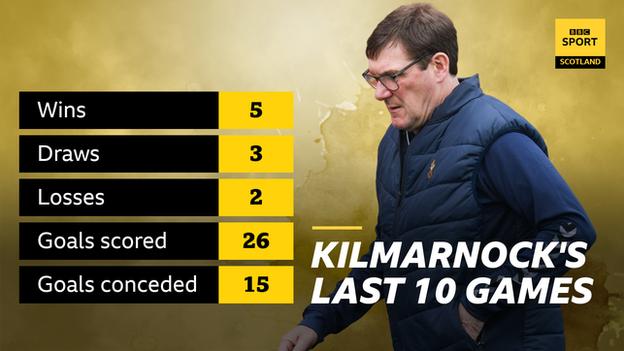 However, they haven't finished second-bottom for no reason. Chiefly, it has been down to their slackness at the back.

In the same timeframe, they have conceded five goals in two matches against County, and shipped six to St Mirren in Scottish Cup and league meetings.

All told, they have let in an average of 1.5 goals per game in their last 10 and have a habit of letting leads slip, too.

Wright seems unconvinced by his goalkeeping options, with Colin Doyle and Danny Rogers both making errors in recent games, while full-back is also a problem, with balls in behind them often a source of joy for the opposition.

Will history be on their side again?

Previous nail-biting ends to a season have tended to go Kilmarnock's way.

The only thing you worry about is, does it catch up with you? When you've had four or five times staying up on the last day or through the play-offs - you hope your luck keeps going.

If they hadn't got Lafferty in, it would have been a big, big ask. But the fact they've got a goal-scorer gives them that bit of impetus. But they don't keep many clean sheets so I think it will be an entertaining two games.

I make Kilmarnock favourites. Dundee are doing well and we speak about Charlie Adam but you can be sure he won't be getting the time and space on the ball that Raith gave him in the first leg of the play-off semi-final.

I think Kilmarnock have got too much going forward. If Dundee can get the ball forward and ask questions they can pose problems. But I just think Kilmarnock will be too strong. It won't be a massive difference.