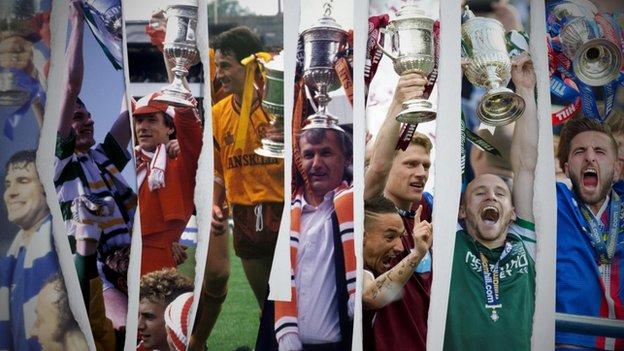 And they will secure their fourth triumph in the tournament if they beat St Johnstone in Saturday's showpiece.

Motherwell's epic 4-3 win over Dundee United almost exactly 30 years ago was second in the vote with 13%, while Hearts' 5-1 Edinburgh derby final defeat of Hibs in 2012 was third with 12%.

Saturday's showpiece, with St Johnstone hoping to complete a domestic cup double, will be the 136th Scottish Cup final.

Here is the top five as voted for by you...

A standout in recent years. The first final to be contested by two teams outside the top flight proved to be iconic. The injury-time rising header from David Gray brought the Edinburgh side's 114-year wait for Scottish Cup victory to a dramatic end.

It was the final that had everything. Two brothers in charge of the teams, iconic players, a goalie with a ruptured spleen and broken ribs, a comeback to force extra time, and a super sub winning the cup after scoring from the bench in every round. Take a bow Stevie Kirk.

If Danish breweries did cup finals...

The first Edinburgh derby Scottish Cup Final since 1896 certainly delivered. In one of the most one-sided affairs in cup history, Paulo Sergio more than got the better of Pat Fenlon on the afternoon as Rudi Skacel secured hero status for the team in maroon.

Epitomises winning a game at the death. Celtic took the lead twice in the game and unlike most Old Firm ties, the trailing side got the better of their rivals in the end. Peter Lovenkrands' header with 10 seconds to go broke the hearts of Martin O'Neill's side.

Another extra-time classic. This iconic match was forced beyond the 90 minutes as the sides were locked at 1-1. A masterclass from Alex Ferguson's side followed and confirmed that a team outside the Old Firm won the Scottish Cup for the first time in 12 years. And remember Neale Cooper's celebration...