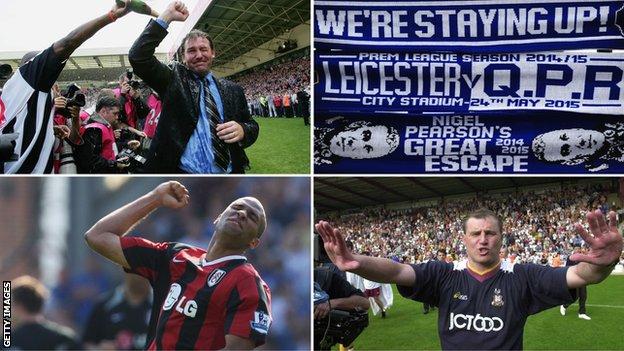 The end of a football season is full of highs and lows. There are trophies, and there are relegations. But what about that feeling of ecstasy when your team avoid the drop by the skin of their teeth?

To hear how they made their final selections, make sure you listen to the podcast on BBC Sounds, and you can rank yours at the bottom of the page too.

After a run of six successive defeats in March and April 2000, Bradford looked doomed. But they turned it around with an impressive run of form late in the season, and secured survival with a 1-0 win over fourth-placed Liverpool on the final day, with Wimbledon relegated after a 2-0 defeat by Southampton.

Shearer: How do you get that form when you've been so poor all season? To win four and draw one of your last five games is unbelievable - what is that about? Is it teams thinking that the season is finished and that they have nothing to play for, stepping off the gas a bit?

Lineker: When you win one or two, then every game becomes huge.

Fulham were in the relegation zone when Roy Hodgson succeeded Lawrie Sanchez as manager in December 2007. They ended up having to win their final three matches to stay up. Vital victories over Manchester City and relegation rivals Birmingham gave them a chance, and a 1-0 win at Portsmouth on the final day of the season kept them up on goal difference.

Shearer: Hodgson would have had to work with all his experience on that occasion, and he has got a lot. Often when teams are in the mire, they look to someone who has been there and done it. Roy is in that category - he's been around for so long that if you need someone to lean on, he's that bloke.

Richards: I had a different experience of Roy - when it was the Euros in 2012. I'd had my best season in a Manchester City shirt and he was England manager. It always hurts me because he got Stuart Pearce to ring me and tell me he hadn't picked me; he didn't do it himself. So I had just come off that high of winning the Premier League with City, and then you think you're going to the Euros and the manager can't even ring you. If he'd been honest and said, 'we're going with a different option' I could accept that - but I lost a lot of respect for him then.

Wigan spent much of the season in the bottom three, losing eight games in a row from September to November. But in March they hit a decent run of form and won seven of their final nine games to finish in 15th, seven points clear of Bolton, who went down with Blackburn and Wolves.

I like Martinez. I work on the Champions League with him, and he sees the game really differently. He's very tactical and some might say he overthinks things at times, but he really knows his football.

He asked me about the modern-day player once - meaning that they're more sensitive. I've had coaches that have said things to me that if they said now they wouldn't get away with it. So Martinez was trying to make himself more in tune with what the modern-day player needs because the game is always evolving, and the best managers are aware of that.

Shearer: I think the man-management thing has always been important but probably more important than the coaching these days, knowing how to get the best out of someone. Psychology is a huge part of football now.

With Portsmouth struggling in the relegation zone, manager Alain Perrin was sacked in November and replaced by Harry Redknapp, who had walked out on their fierce rivals Southampton after being refused permission to talk to Pompey. By February, Portsmouth were still eight points adrift of safety, but six wins in 10 games - and a 2-1 victory at Wigan in their penultimate game - saw them finish 17th, four points above the relegation zone.

Shearer: If you need a job doing, then Redknapp's the man, isn't he? He was unbelievable. You can speak to all sorts of players who have worked with him and all have different stories about him and how good he was. He was the guy for the man-management, and looking at players and knowing how to get the best out of them. I don't want to do him a disservice because he did have huge coaching ability, but that was a big part of it.

Lineker: He has brought out the best in individuals - Gareth Bale, for example. Of course, Bale has tremendous ability but he certainly got the best out of him. He's fun and makes the game enjoyable.

Richards: Redknapp's one of those managers you would want to play for. I can imagine him galvanising the whole team spirit. To pick up more points in the last 10 games than the previous part of the season, it's ridiculous what he did.

West Brom made history by becoming the first Premier League team to stay up after being bottom on Christmas Day - and the first to do it in the English top flight since Sheffield United in 1990-91. Four teams went into the final day of the season at risk of relegation and only one would survive. West Brom beat Portsmouth to ensure they finished above the line at the expense of Norwich, Southampton and Crystal Palace.

Shearer: We had Robson with England - he was assistant to Terry Venables - and he was brilliant. He was the go-between for the lads and the manager - he knew how it operated and what the lads were up to. You could do nothing but respect him because of what a player he was. He had an up-and-down managerial career but what you knew was if it didn't work, it wasn't for a lack of trying.

West Brom won one of their first 23 matches and then were only beaten three times in the last 12 games. To turn it around... incredible.

Richards: It's all about confidence at that stage - you win one and think, 'we could be in with a chance'.

After Sunderland failed to win any of their opening eight matches of the season, Dick Advocaat quit and was replaced by Sam Allardyce. His first win came in the Tyne-Wear derby against Newcastle, but five consecutive defeats in December left them seven points adrift of safety. They lost only four of their 19 Premier League games from January, though, and having spent 237 days in the relegation zone, they secured safety with a 3-0 win over Everton in their penultimate game.

Shearer: Big Sam was magnificent at galvanising the dressing room and getting them together, and getting two or three players in the transfer window who ultimately did a job for him.

This was the same season that Newcastle were relegated, so it was a tough one to take. I'm sure Sam would've enjoyed it - with him having been at Newcastle - but it hurts. I wouldn't go as far as saying Newcastle and Sunderland hate each other but it's not nice. Great games to play in, though. 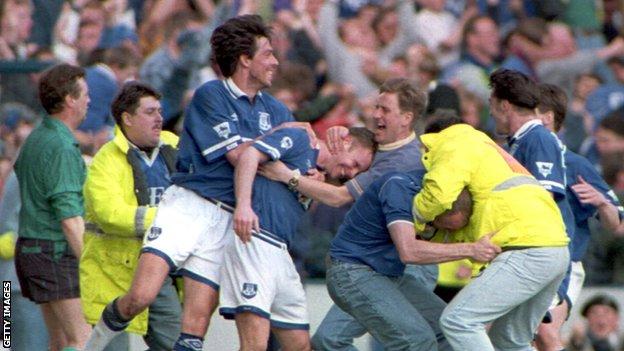 Seven years after winning their last top-flight title, Everton teetered on the brink. Mike Walker's Toffees won just twice in their final 11 games of the season. But, crucially, one of those victories was against Wimbledon on the final day. From 2-0 down and looking doomed, they won 3-2 thanks to Graham Stuart's 81st-minute goal.

Lineker: Everton have only spent four seasons outside the top flight in their history, so there was added pressure for them.

It was also the end of Howard Kendall at Everton, because he left mid-season and Walker took over. Kendall was such an engaging person, tactically he knew and understood the game really well - but it was the togetherness he managed to get. If we were having a rough patch, he would take the players to his favourite Chinese restaurant for a lunch that would go on all night - as close as you could get to being 'one of the lads'.

A 1-1 draw against West Ham on the final day kept Aston Villa up by just a point, averting the prospect of an immediate return to the Championship, and laying the foundation for a push into mid-table this season. But how might recent history have been different had goalline technology functioned properly in a 0-0 draw with Sheffield United?

Richards: They escaped because of Jack Grealish. He makes taking on people look easier than anyone else I've ever seen, he's similar to Samir Nasri the way he drops his shoulder and it's effortless. He's strong, knows how to buy a foul, he's technically very good. Without him, they would've gone down. He is the man at Villa, he loves them.

Lineker: He's very close to being an important player for his country as well as his club. If there weren't so many terrific young players he would walk in, and a lot of people think he should be there anyway - I totally agree.

I wonder if he'll still be there next season. It's difficult to leave your home club but there comes a point where ambition takes over.

Shearer: If the worst had happened, he probably wouldn't be there now. That's what happens when you get relegated - ultimately your best players will have to leave. But you should never underestimate that love for your football club. There are players out there who genuinely just love their club.

This was Leicester's first season back in the Premier League after 10 years, and were stuck on the bottom of the table for four and a half months. But seven wins from their last nine games led to ultimately comfortable survival - they finished 14th.

Lineker: They were almost certain to go down... and then the following season won a title. It's impossible! They were useless, and suddenly brilliant, and it's hard to explain why.

Richards: They were bottom with 10 games to go, won seven of the last nine and finished 14th. Unheard of - magical. The team spirit must have been pumping. You fully deserve to stay up if you go on that sort of run.

West Ham looked doomed with six weeks to go. Nine matches, and seven wins later - including a 1-0 victory at Manchester United on the final day - and they were safe. Rival clubs claimed foul play over third-party ownership of Carlos Tevez and Javier Mascherano, which resulted in West Ham having to pay £20m in compensation.

Richards: I remember that goal they scored at United - but more so I remember the shenanigans surrounding Tevez and Mascherano.

Shearer: When you're in a relegation battle and then come and produce results like that when the rest of the season has been pretty poor.... unbelievable.

Pick the order you would rank these Premier League great escapes in.