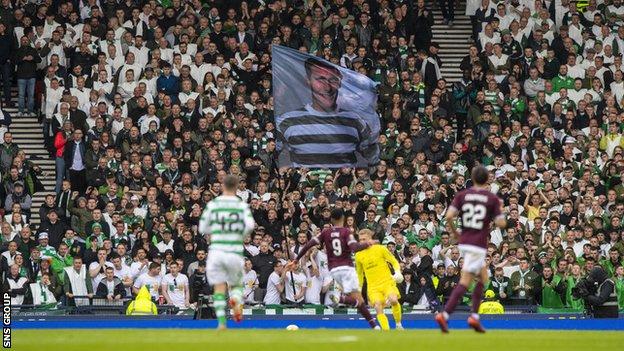 The 2021 Scottish Cup final will - in all likelihood - have fans in the Hampden Park stands.

After a long-running saga, Uefa have given the green light for a "limited number" of spectators to attend the match between Hibernian and St Johnstone.

And now the Scottish FA has asked the country's government if between 1,500 and 3,000 fans can attend.

Initially, despite Scottish government rules, it seemed as though the showpiece event would be played out in an empty ground once again. But what has changed and how have we reached this point?

The Scottish FA previously said there was no chance of fans being allowed into the 22 May showpiece because Hampden is due to come under Uefa control from 14 May to begin preparations for the Euro 2020 matches being held there.

Their point was that building works were needed to prepare the ground, and so the national stadium would not get a safety certificate.

That did not change even when the Scottish government's road map outlined that 500 spectators could attend outdoor events from 17 May, with organisers able to submit proposals for larger crowds.

Meanwhile, Uefa told BBC Scotland they had agreed the cup final could take place under Scottish FA management, and confirmed that included the hosting of fans.

However, the Scottish football authorities say they had previously been told otherwise.

On top of that, England's FA announced fans will be allowed to attend the finals of the various football league play-offs, all to be held at Wembley (also a Euro 2020 host venue) the week after the Scottish Cup concludes.

On Tuesday, Uefa said they had received a request from the SFA to have fans after all, days after it emerged Wembley was being considered to host the Champions League final with thousands of fans present.

European football's governing body swiftly gave the green light for supporters to watch and, now, barring any further impediments, it is a matter of how many.

Was there a chance of other venues?

Finalists Hibernian and St Johnstone have both indicated they would be open to playing the final away from Hampden, if having fans was off the table.

Celtic, Rangers, and Hearts were all approached by the SFA about potentially using their respective stadia for the final, but for different reasons the trio said no.

Scottish Rugby also said Murrayfield was not an option, given Pro14 Rainbow Cup games are happening there right into June.

On Monday, Aberdeen announced they would be open to hosting the final, but they were the only club to publicly offer.

What do players & fans think?

For supporters and players, it was always going to come down to getting fans at Hampden. The history and prestige associated with the national stadium means most people would prefer to have played on Glasgow's south side.

The only way that was going to change was if no fans were allowed, due to Euros preparation and thousands could attend an alternative venue instead.

St Johnstone midfielder Craig Bryson: "I think when you're growing up you want to be in the Scottish Cup final at the national stadium or a big stadium that adds to the whole occasion.

Hibernian head coach Jack Ross: "Speaking purely personally, that magic of winning the cup at Hampden still remains for me. I grew up with Scottish Cup final day being a massive part of the football season and a massive part of my childhood and been a huge part of my ambition as a player.

"From my own point of view in terms of how much I love the game the Scottish Cup final for me would always choose to do it at Hampden.

What about the play-offs?

All the divisional play-off finals are scheduled to take place on or after the 17 May, so are allowed to host up to 500 fans.

Dundee have announced that - should they beat Raith Rovers this week to get there - they will host 500 fans for the home leg against the 11th team in the Premiership at Dens Park.

The Championship club will ballot season ticket holders in order to decide who will get tickets.

Other clubs involved in the finals may follow suit, and there remains the option to apply to their local authority for greater numbers.