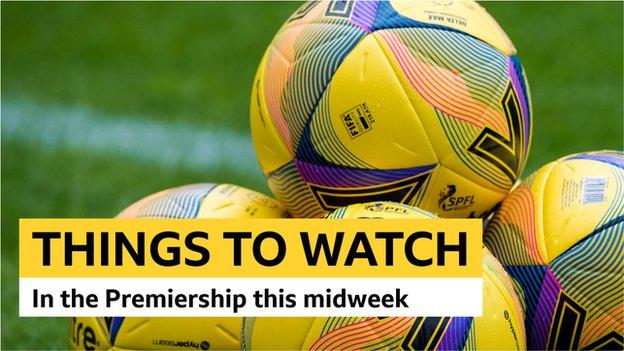 Two sets of fixtures spread over five days - with 10 of the 12 sides still having something to play for - will bring the Scottish Premiership to what could be a dramatic conclusion.

That figure of 10 can be increased to 11 if you include Rangers' desire to finish the league season unbeaten, leaving deposed champions Celtic in the runners-up spot as the only side with nothing but win bonuses at stake.

So what should we be looking out for in Wednesday's full programme of fixtures?

European places up for grabs

At the end of March, when Aberdeen were seven points behind and awaiting the arrival of new manager Stephen Glass, Hibernian looked certainties for third spot.

However, if the Dons win when they meet on Wednesday, they will move level on points, having also eaten into Hibs' goal difference advantage.

With Sunday's final game away to Rangers, though, Aberdeen must win against a side who arrive on a high after their Scottish Cup semi-final triumph over Dundee United.

Both are already guaranteed a place in the new Europa Conference League, but Livingston could join them in Europe should Hibs go on to win the Scottish Cup and take a place in the Europa League instead.

However, David Martindale's team must improve on a run of one win in their last 10 league outings, during which they have slipped behind St Johnstone on goal difference. Hosting a Rangers side against whom they have not scored in six meetings makes their task more daunting.

St Johnstone have two routes to Europe as they travel to face Celtic on the back of their own Scottish Cup semi-final win over St Mirren. Finish fifth and they are guaranteed a Conference League spot even before they look to beat Hibs to the prize of the cup and a Europa League place.

Saints are seeking a first win at Celtic Park in 10 visits since March 2015 and, given what's at stake and the fact that four players missed out on Sunday because of Covid-19 protocols, manager Callum Davidson might not have the leeway to rest many of his top players, even with the cup in mind.

Relegation goes to the wire

St Mirren and Dundee United will look to heal the bruises of Hampden Park defeats as they eye finishing the "best of the rest" in the bottom six.

United host the side currently sitting seventh and a win is surely a must considering they are two points behind a Motherwell side who have lost just once in six outings.

St Mirren, one point behind the Lanarkshire side, visit Kilmarnock as they look to bounce back from the pain of two semi-final defeats and missing out on the top six on the final day before the split.

Their Ayrshire hosts find themselves back in the relegation play-off spot, having followed the cup defeat with a loss to Motherwell, and will hope to take advantage as their two rivals at the bottom face one another in Dingwall.

It is arguably the game of the evening as Ross County entertain a Hamilton Academical side who currently two points adrift at the bottom.

Accies ended a nine-game run without a win by beating St Mirren in Paisley last time out, only to suffer the disappointment of County securing their own first win in six by defeating United to maintain the three-point gap between them.

County will be safe should they secure their first back-to-back league win since the first two weeks of the season while Kilmarnock also lose. Should County and Kilmarnock both win, Accies' six-year stay in the top flight will be over.

Hamilton head north seeking their own first back-to-back win since the last two games of last season - and to continue a sequence of three away victories against County this season and level it up at two apiece.

It is not so much a must-win as a cannot lose game for Brian Rice's side and, to add intrigue to the occasion, the hosts are led by John Hughes, to whom he was assistant at Falkirk, Hibs and Inverness Caledonian Thistle.

We are one stage closer to knowing who the side finishing second bottom will face in the Premiership Play-off final.

Having edged out Dunfermline Athletic on aggregate in an edgy Fife derby on Saturday, Raith Rovers host Dundee in Wednesday's first leg with the visitors very much the side in the ascendency.

While the Kirkcaldy side ended a run of three games without a win with that 2-0 success, James McPake's Dark Blues overtook Wednesday's hosts in recent weeks to finish second after a run of six games without defeat, including a 2-1 win over Rovers at Dens Park.

However, that was their first win in three meetings with John McGlynn's side this season after a 1-1 draw in Dundee followed by a 3-1 defeat at Stark's Park in January.

It would be a surprise if there was much between the sides come Saturday's second leg.