It's hard to know for sure, of course, but we're guessing Raymond Chandler would have loved Scottish football.

The famous crime writer - who once said: "When stuck for a plot twist, have a man walk through a door with a gun" - would have been all over the madcap wonder of the game in this country, particularly the breathless unpredictability of the Scottish Cup quarter-finals just gone with, hopefully, a continuation of the drama this weekend as the remaining four reappear for the semi-finals.

Hibernian players may have needed a whiff of smelling salts after they almost blew it against Motherwell only to regain their nerve and see them off on penalties. St Mirren would have been forgiven for calling for oxygen after the six-goal frenzy of their own clash with Kilmarnock, another game settled from the spot.

As for St Johnstone? Stretchers must have been on standby after what went on at Ibrox. A giant goalkeeper wearing a jersey so bright it could have lit a runway and sporting a beard so vast it might have tickled all around him was somehow invisible to the best defence in the league in the last seconds of a knockout game in Rangers' own backyard. Chris Kane scored, but what we'll remember was Zander Clark wheeling away. How joyous was that? How utterly brilliant.

By comparison, Dundee United's victory over Aberdeen in the other quarter-final was unremarkable only for the fact that it was pretty damn special. All season, United have struggled for creativity and goals. At no point could they have been mistaken for great entertainers. Micky Mellon? PT Barnum, he was not.

Then, this obliteration of the Dons unfolded. United won 3-0, but it could have been five or six. They were ambitious, pacy and exciting. Aberdeen didn't know what day it was. Where had this exhilarating version of United come from - and might there be a chance it could stick around for another game or two?

We'll get the answer to that one on Saturday when United and Hibs are first up at Hampden. So far, Hibs have cause to be delighted with what they've done this season - the limp League Cup loss to St Johnstone aside. They're third in the league, which is probably one place ahead of expectation and budget. If they stay there, that's a fine season on its own. If they add a Scottish Cup, Jack Ross is in new territory altogether.

For their part, United's prime mission was to stabilise in the Scottish Premiership after their promotion from the Championship. They've done it handily enough. It's not exactly been a thrill fest - only 30 league goals from 36 games - but they're ninth and were never in any danger of going any lower. That'll do, for now.

A Scottish Cup turns a reasonable season into a memorable one. This time, it comes with the considerable bonus of group stage European football until the end of the year, a prize that could amount to two, three or four million quid. For any of the semi-finalists, that's a sensational prospect. For a club like United, with stress on its balance sheet, that pot of gold would glisten almost as brightly as the cup itself.

United's form line is all over the place - a 3-0 loss to Killie followed by the destruction of Aberdeen followed by a 2-0 defeat by Ross County. Mellon changed his side around in those games either side of the cup tie, so it's hard to know where they're at. If they can replicate the speed and accuracy they showed against Aberdeen, they're going to be a double-handful for Hibs.

The Edinburgh side have won two of the three meetings this season, with the other ending in a draw. They've not lost to United in seven games and they're favourites to make it eight. They were favourites against St Johnstone in the League Cup semi-final too. We thought that the goal threat of Kevin Nisbet, Christian Doidge and Martin Boyle would be too much for Saints. They barely noticed them out there.

All three have had strong seasons though. Nisbet is on 17 goals, Boyle on 15 and Doidge on 11. You have to go back to 2009-10, to the days of Derek Riordan, Anthony Stokes and big Colin Nish, to find the last time three Hibs players hit double figures in the same season.

There is a lot of positivity around the Edinburgh club right now. Some of their players are coveted by clubs in England. Owner Ron Gordon says he wants to invest in strengthening the squad in the summer. They're on an upward curve. They lost their nerve in the League Cup semi-final. They held their nerve, then lost it, then regained it in the Scottish Cup quarter-final against Motherwell.

What next? Would anybody be in the least bit surprised if this one went all the way to penalties again?

Battle of the Saints too tight to call

On Sunday, it's the battle of the Saints. Of course, there's been nothing celestial about St Johnstone's preparation. They've lost two men to Covid-19 and another two have been ruled as close contacts. Callum Davidson has overcome many things in his remarkable rookie season as manager and here's another hurdle he has to negotiate.

The quarter-final victory at Ibrox was built on Clark's excellence in goal, the terrific defending of Jason Kerr, Liam Gordon and Jamie McCart in front of him and the energy of Ali McCann and Liam Craig in front of them. Every player was a giant. To win a Scottish Cup on top of a League Cup would be a domestic managerial achievement to match any in the history of the game in Scotland. For St Johnstone to win two trophies would make Davidson manager of the season by a street. 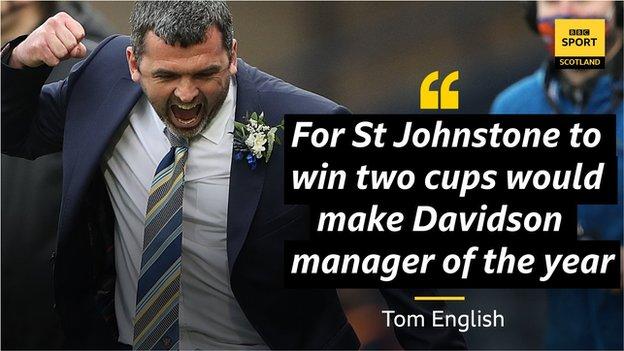 Davidson has won a League Cup and a top-six finish in the league on small resources. Stevie May is his leading scorer on 10 goals in all competitions. It's not a lot, but when you have stand-up characters throughout the team then it's enough. McCann is 21, McCart is 23. Kerr and Shaun Rooney are 24, Gordon is 25. They're top pros with a tremendous work ethic. In some ways, it's a huge surprise what St Johnstone have done. In other ways, it's not a major surprise at all.

Only two Scottish sides have beaten Rangers this season and here they are. St Mirren took out Steven Gerrard's team in the League Cup in pretty stunning fashion. Jamie McGrath was outstanding that evening. He's been on it for most of the season, to be fair to him. Sixteen goals. A real presence in the middle of the park. A totem at 24.

Manager Jim Goodwin has had a strong season while knowing that it could have and possibly should have been even better. St Mirren are lying eighth in the league on 43 points. One more win from their two remaining fixtures and they'll have beaten their best points total since 10 clubs became 12 in the Premiership 21 years ago.

They made the League Cup final to boot. They'll have regrets about that, but this is as good as it's been in Paisley in the top flight for many years. A winner on Sunday? Saint somebody. We'll accept the splinters on this occasion because this is a fiendishly hard one to call.

You wonder what these managers could do with the extra finance that winning the cup would bring, the financial leeway to add quality and depth, the capacity to keep players they desperately want to keep. Winning the cup gives them a chance to do that, this year more than any other year.

Getting to the final is the next step. We can't expect the same level of mad entertainment we got in the quarters, but there's a great sense of anticipation none the less.