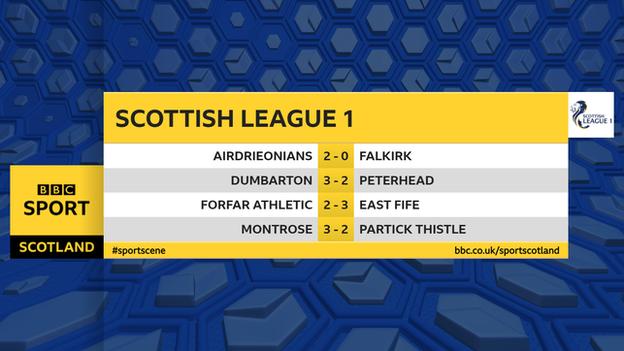 Montrose pipped Falkirk to the final Scottish League 1 play-off spot after a dramatic 3-2 win at home to champions Partick Thistle.

Martin Rennie and Russell McLean scored either side of a Ross MacIver leveller, before Joe Cardle equalised again for the visitors just after the hour.

But Cammy Ballantyne hit an 87th-minute winner to heap misery on Falkirk.

A point would have been enough for Gary Holt's side, who conceded two late goals to lose 2-0 at Airdrieonians.

Craig Thomson opened the scoring for Airdrie on 88 minutes and Kyle Turner doubled the advantage in stoppage time to lift Ian Murray's side above Cove Rangers into second.

It rounds off a miserable campaign for Falkirk who were three points clear at the top with six games to play. They have taken just one point from those matches in a costly late collapse.

In the bottom half, Dumbarton potentially secured their third-tier status in another five-goal thriller.

Jim Duffy's men looked set to finish in the relegation play-off spot after goals from Steven Boyd and Derek Lyle had visitors Peterhead 2-1 ahead.

But an 80th-minute equaliser from Morgyn Neill and an injury-time winner from Jamie Wilson means Duffy's side leapfrog Clyde.

The Broadwood club, who are now two points behind Dumbarton, host East Fife in the final League 1 game of the season on Thursday.

Ross Davidson cancelled out Scott Fenwick's opener but Forfar regained the lead early in the second half through Daniel Scully. 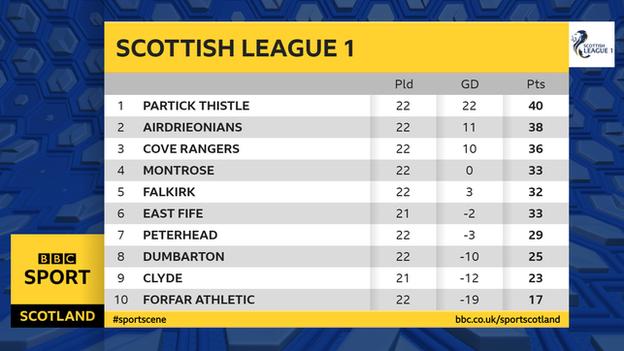