Newport County are targeting all three points against relegated Southend despite needing just a draw to make the play-offs, says captain Joss Labadie.

Five teams still have hopes of securing the three remaining play-off spots in League Two with just one game left.

If Newport lose to Southend, victories for Tranmere Rovers, Forest Green and Exeter City would see County miss out.

"It will be business as usual, we go into the game like any other, looking to get three points," said Labadie.

"They may be relegated already but they will not roll over and let us turn up and do what we want.

"We will apply ourselves in the right way like we have the last few games and go for the win.

"We go into the game confident, but it's a tight league, anyone can beat anyone." 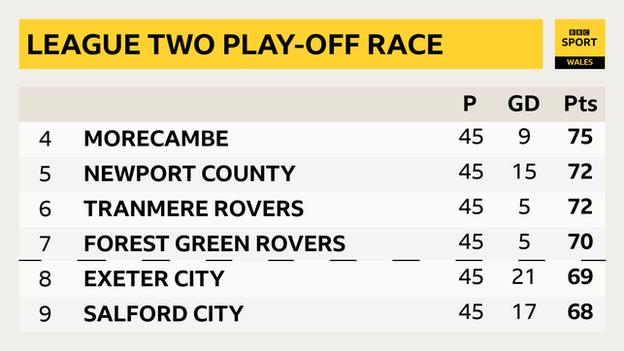 On paper Saturday's match against relegated Southend appears favourable, but the Shrimpers have two wins from their last two games against Barrow and Leyton Orient.

The other key fixtures on Saturday also appear to suit the play-off chasing sides.

While Salford cannot catch Newport or Tranmere, they will still be targeting seventh place Forest Green on Saturday when they host out-of-form Leyton Orient.

If Newport reach the play-offs then Mike Flynn's side could re-visit previous disappointment in the form of a play-off match with Tranmere.

The Exiles were beaten 1-0 in extra-time by Rovers at Wembley in the 2019 League Two play-off final, with Connor Jennings' 119th strike breaking the hearts of travelling Newport fans.

County captain Labadie, who started that day, hopes it can be "second time lucky" if Newport can secure a top seven finish.

"I love being captain of this football club, it's a privilege and an honour to do so," said Labadie.

"We have an amazing group of players, everyone gets along, and hopefully we can do it - second time lucky." 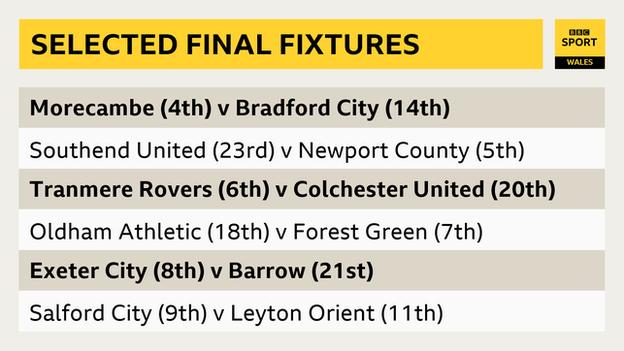