Pep Guardiola's side are now 10 points ahead of second-placed United, who have just three games remaining.

It is the seventh time City have finished top of the English football pyramid and the fifth in nine years.

"This has been a season and a Premier League title like no other," said Guardiola.

"This was the hardest one. We will always remember this season for the way we won. I am so proud to be the manager here and of this group of players.

"They are so special. To come through this season, with all the restrictions and difficulties we've faced - and show the consistency we have is remarkable. It is relentless.

"Every single day, they are there, fighting for success, trying always to be better. They have been so, so resilient.

"I have been in Spain, I have been in Germany and I can say this is the toughest league, I would say by far. So it means a lot to everyone."

Manager Guardiola, 50, has now won eight domestic trophies since arriving in Manchester in 2016.

City had the chance to wrap up the title themselves on Saturday, but suffered a 2-1 defeat by Chelsea at Etihad Stadium.

However, Leicester completed the job for them with a 2-1 victory at Old Trafford on Tuesday.

It is the sixth time the Premier League title was decided at Old Trafford - the most of any venue, and three of which have been for other sides.

It is City's second trophy in a little over two weeks after they beat Tottenham to claim the Carabao Cup and they are also in their first Champions League final after beating Paris St-Germain in midweek.

Since being taken over by the Abu Dhabi Group in September 2008, City have won 12 cups and this is the third time they have clinched a league and EFL Cup double.

They are set to lift the Premier League trophy after their final game of the season against Everton on 23 May.

Up to 10,000 fans will be present inside the stadium after the latest lifting of coronavirus restrictions in England. 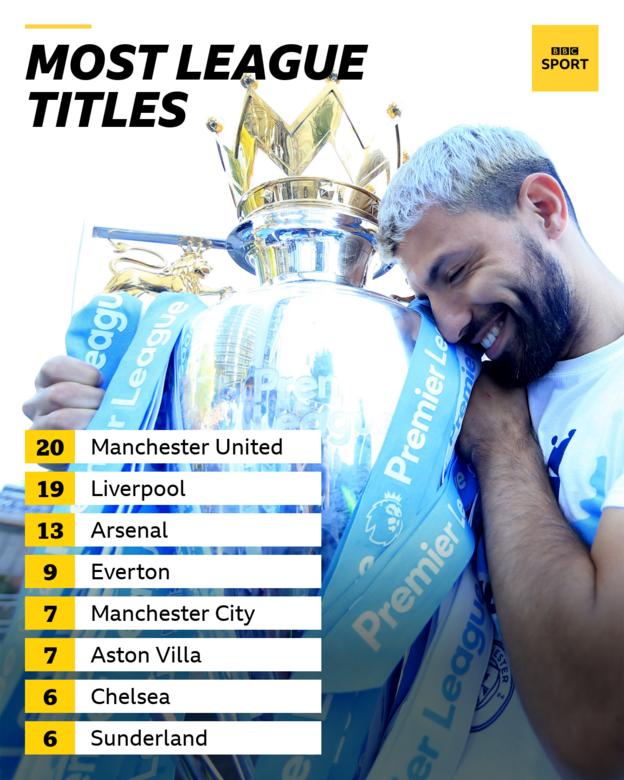 How City won the title

Guardiola's side finished 18 points behind Liverpool last season, and after losing another key player from recent success in David Silva, Guardiola needed to act.

But City did not have the most auspicious start to the season, slumping to a 5-2 defeat in their opening home game to Leicester City.

Just a day later, Guardiola moved to fix the problem - and the signing of Ruben Dias changed the course of the season.

Dias brought the composure, leadership and stability that had been lacking since Vincent Kompany left and his partnership with the reborn John Stones established City as the league's most miserly team.

Even so, when Tottenham beat City on 21 November to go top of a seemingly unpredictable division, City were 11th and eight points off the pace, and it looked as though this might not be their year again.

But though doubts arose and questions were asked about the Spaniard's future, City quickly shut them up.

They went on to win 22 of their next 27 matches, including a 15-game winning run and a record-equalling 11 successive away league victories.

At Anfield in February, where they had not won in the league since 2003, City bullied and dominated the defending champions, with Phil Foden brilliant in a crushing 4-1 victory.

Stones and Dias' partnership at the back was key, conceding just three goals in the 15 games after that Spurs defeat, while Ilkay Gundogan has been the star at the opposite end of the pitch, his 12 goals so far leading City's goalscorers.

The chasing pack did not have enough to rein them in and the title returns to the blue half of Manchester.

City captain Fernandinho said leading the team was "an honour and a privilege".

"I am so proud and so happy with what we have achieved," he said. "The Premier League is the hardest league in world football - every single match is tough. To win it again means the world to me and the rest of the squad.

He added: "Football is everything to us and we strive every single day to be as good as we can be in the hope we can bring success to Manchester City.

"Winning the Premier League is the ultimate fulfilment of our ambitions. It's what we all dreamed of as young players, so to do it is a wonderful feeling.

"We have missed the fans so much. We wanted to do this for them.

"We will enjoy this moment and we hope the fans do too. Rest assured we will continue to do everything we can to bring the Champions League home this season."

Former City midfielder Michael Brown, speaking on BBC Radio 5 Live: "City have been convincing all the way through the season.

"They've been relentless in all competitions and have been an absolute pleasure to watch. They have shown attacking flair but that brilliant back four too. To be within touching distance of four trophies has been just fantastic.

"Pep Guardiola has found a team he can rely on and a total team performance. They fully deserve the Premier League trophy.

"You can only imagine people's phones are going to melt trying to get tickets to see the trophy lift."

Manchester United manager Ole Gunnar Solskjaer, speaking to BBC Sport: "We have pushed Manchester City all the way, until 10-12 days left in the season and it is a very good achievement because they are a very good team.

"They are very worthy champions. I have to say congratulations because they have played some fantastic stuff this season."

Leicester manager Brendan Rodgers, speaking to BBC Sport: "They are the benchmark. They have been outstanding. Brilliant players, incredible manager and they thoroughly deserve the title."