Dunfermline Athletic and Raith Rovers kicked off the Scottish Premiership play-offs on Tuesday in a bid to make to the dream jump to the top flight.

If either of Stevie Crawford or John McGlynn's sides are successful, it will be the first time a side finishing either third or fourth in Championship has made the step up to Scotland's top tier.

BBC Scotland has a look...

Who plays who & when?

Dunfermline, Raith and Dundee are the three Championship sides involved in this campaign's play-offs.

Dunfermline, who finished fourth, fought out a 0-0 draw with third-placed Raith before the Fife rivals play the return leg on Saturday afternoon.

The quarter-final winners will then host runners-up Dundee in the first leg of the semi-final next Wednesday, before travelling to Dens Park the following Saturday for a place in the final.

One of Hamilton Academical, Kilmarnock and Ross County will be waiting for whichever Championship club prevails, who will welcome the top-flight side on 20 May, with the sixth and final play-off leg taking place four days later. 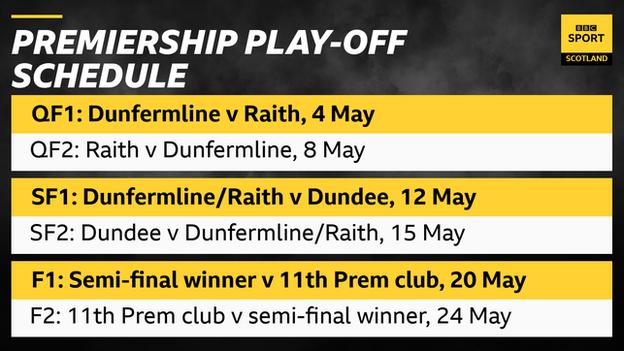 How difficult is play-off success?

Since the play-offs were reintroduced for the 2013-14 campaign, only two teams have achieved promotion.

Hamilton Academical upset the odds in a memorable comeback win against Hibernian in 2013-14, while Livingston downed Partick Thistle in 2017-18.

The presence of Rangers, Hearts, Hibernian and Dundee United in recent years has enhanced the difficulty of play-off promotion for lesser sides within in the second tier and that is before you factor in the added advantages for the Premiership's 11th-placed club.

In a normal campaign, second-tier sides will have completed a 36-game league season by the time the play-offs start and as many as six further gruelling fixtures over a short spell could be required to ensure promotion.

The Premiership club also has the bonus of playing their home game in the final leg. However, with home advantage diminished due to the continued absence of fans in stadia and the fact that this season's Championship was truncated to just 27 games, might that serve up a potential shock?

Who will fancy their chances?

Permitting they can navigate past Raith and Dundee, Dunfermline may fancy their chances having beaten a depleted Kilmarnock side 3-0 in the League Cup groups earlier this season before taking eventual winners St Johnstone to penalties in the quarter-finals.

The same applies for Raith, who ran Livingston close in the Scottish Cup third round after falling to a 2-1 extra-time defeat in West Lothian.

Dundee have picked up form at the right time, ending the league season on a eight-game unbeaten run to finish second - ensuring their place in the semi-final - as they bid to return to the top flight after a two-year absence.

Momentum may be with the Dark Blues but they only leapfrogged Raith on the final day and those two have shared the points over this shortened season, with a home win each and a draw.

Raith and Dunfermline have also split the points in the same way, while Dundee have a slight edge on Dunfermline after a win and two draws.

'Dundee are in a good rhythm' - analysis

Second place could prove to be so important. Historically, the stats show that finishing second enhances your chances massively of getting promoted or, at least, into the play-off final.

Therefore, that gives Dundee a good opportunity of getting back into the top flight. That's what they've got to be aiming for. They're in a good rhythm and they have someone at the top end of the park in Jason Cummings that they believe can score them goals. They're quietly moving forward.