Sir Alex Ferguson says Scott McTominay is the latest in a line of "great Scots" to make an impact at Manchester United.

The 24-year-old academy graduate has played 43 times for the Old Trafford club this season, scoring seven goals from midfield in the process.

And Ferguson, 79, believes he is in the class of the likes of Darren Fletcher and Brian McClair to grace the field for his former club.

"We've been blessed," he said.

"I signed him when he was seven or eight years of age. McTominay is of a similar type to Darren. A bit long, lanky, a good winner of the ball, a good turn of pace going forward, a great attitude to the game.

"Going back to my time, we very seldom left Darren out of big games, especially against Arsenal. He was fantastic against them. If you put him against [Patrick] Viera, no problems.

"It's really rewarding for me to see a Scot coming through. Darren was one, McClair was a great Scot for us, a fantastic player.

"We've been blessed with great Scots right through going back to the king, Denis Law. It makes you proud." 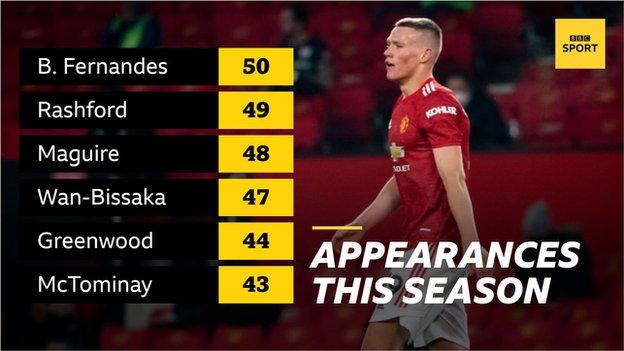 While playing a starring role for his club in the middle of the park, McTominay became a national hero last year in defence as Steve Clarke's Scotland clinched qualification for this summer's European Championships.

The task to progress further is not easy, with England, World Cup finalists Croatia and the Czech Republic lying in wait in Scotland's first major finals since 1998.

However, Ferguson, who managed his country at the 1986 World Cup, remains upbeat.

"I look at the midfield players and I think they are as good as anyone," said Ferguson, speaking as part of the rollout of Euro 2020 Glasgow Legacy Packs to support grassroots football.

"You look at [Kieran] Tierney who has been fantastic at Arsenal. [Andy] Robertson's last two years at Liverpool has been unbelievable and McTominay is now emerging as one of Man United's big players.