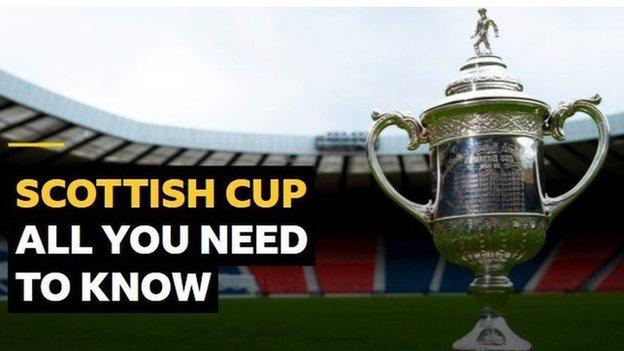 Dundee United and Hibernian have already secured their places in the Scottish Cup semi-final, but who will join them?

With holders Celtic already out, a new name will be engraved on the famous trophy next month.

Here, BBC Scotland takes you through the two remaining ties.

One side will be left with hopes of a domestic double crushed at Ibrox.

League champions Rangers are strong favourites having won all three meetings with League Cup winners St Johnstone this season without conceding - scoring seven times - until Liam Craig's late penalty secured a point for the home side on Wednesday.

While St Johnstone arrive having only lost once in nine outings, their hopes of an upset appear slim considering they have not scored in their latest three visits to Ibrox, have not beaten Rangers in any of their previous 14 Scottish Cup meetings and Steven Gerrard's side have only lost once at home all season - to Slavia Prague in the Europa League last 16.

Indeed, the Perth club have not reached the semis since they lifted the trophy for the first time in 2014 and lost to eventual winners Celtic at this stage last season.

Manager Callum Davidson will be delighted that the suspected concussion that forced in-form Israeli striker Guy Melamed to be withdrawn early in midweek turned out to be a migraine.

For Gerrard, a potential selection headache has cleared with the failure of Rangers' appeal against a six-game ban for five players, including in-form teenager Nathan Patterson, for breaking Covid-19 lockdown rules. It means captain James Tavernier will almost certainly continue at right-back after returning from injury on Wednesday.

Kilmarnock and St Mirren both ended up in the Premiership's bottom six but head into Monday's tie in winning form on the back of some impressive scoring from players born in the Irish Isles.

Northern Ireland striker Kyle Lafferty is the name of everyone's lips after the January signing's midweek hat-trick against Dundee United took the 33-year-old's total from his last six games to 10 goals.

Hailing from the south of the island, midfielder Jamie McGrath has been instrumental in St Mirren's run of one defeat in their latest five outings, albeit three of those have come from the penalty spot.

The bad news for the side managed by his compatriot, Jim Goodwin, is that they have not won in eight visits to Rugby Park since May 2013, have lost their last two Scottish Cup meetings with Kilmarnock and have to go back to 1922 for a win at the Ayrshire ground in this competition.

As for this season, it is one win apiece - the Buddies triumphing 2-0 in Paisley in February, while it was 1-1 on their last visit to Rugby Park in January.

Will any of the several quarter-final omens prove prophetic?