Real are one of the 12 European clubs who have signed up to the breakaway league and intend to establish a new midweek competition.

Perez said the move had been made because young people are "no longer interested in football" because of "a lot of poor quality games".

"Whenever there is change, there are always people who oppose it," he said.

The move has been criticised by football authorities and government ministers in the UK and widely condemned across Europe by Uefa and leagues associations.

Prime Minister Boris Johnson will hold a meeting with football's governing bodies on Tuesday to discuss the move, while the 14 Premier League clubs not included in the plans are also scheduled to meet.

Perez said that the top teams were losing money and that big-name matches would help increase their revenue.

"We are doing this to save football at this critical moment," Perez told Spanish TV show El Chiringuito de Jugones.

"If we continue with the Champions League there is less and less interest and then it's over.

Plans for a revamped 36-team Champions League, starting in 2024, were confirmed by Uefa on Monday.

He added: "In the '50s, it was a similar situation. Uefa and Fifa went against the new European Cup, but that competition changed football."

AC Milan chief executive Ivan Gazidis said the ESL would be "a new, exciting chapter for the game" and that it will "provide value and support" across European football.

"We're confident that this new competition will capture the imagination of billions of soccer fans all over the world," he said.

Gazidis also said the club wants to continue to play in Serie A, which he said "will remain the most important weekend competition in Italy".

Juventus manager Andrea Pirlo came out in support of the ESL and the club's owner Andrea Agnelli, who quit as European Club Association (ECA) chairman after signing the Turin club up to the new competition.

"He explained this project to us, he gave us great confidence, but the most important thing he told us is that we have to continue with our work," Pirlo said.

Why form the ESL?

Perez said the move had been accelerated by the coronavirus pandemic, which has led to matches being played behind closed doors.

He claimed 40% of young people are not interested in football and Real have lost 400m euros (£344m) because of the impact of the pandemic.

"When you don't have any income other than from television, you have to find a solution to make more attractive matches that fans all over the world can watch with all of the big clubs," said Perez.

"Young people are no longer interested in football. They have other platforms on which to distract themselves.

"We could get back some of the money we lost because of the pandemic. We have to raise more money organising more competitive games."

A YouGov poll of 1,730 football fans in the UK found 79% opposed the idea of a Super League.

Among fans aged between 18 and 24, 71% were found to be against it with only 19% of respondents saying they were in favour of the competition. Only 7% said they strongly supported the creation of the ESL. 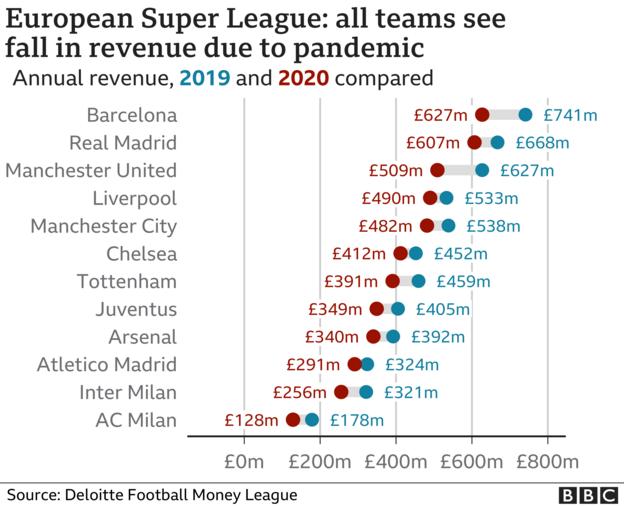 However, critics say the move is being driven purely by money, would destroy domestic leagues and is against the integrity of the sport.

Former England captain Alan Shearer said he hoped the English clubs would consider the reaction of their fans, which has been overwhelmingly negative.

"Clubs talk about being a family and how fans are the soul of the club," Shearer told BBC Breakfast.

"Well, let's see what they really think about the fans, because the fans have now spoken.

"It is clearly obvious that they don't want this, so let's see what their fans mean to the football clubs."

How could the league work?

There has been no concrete plan released on how the tournament would be structured but Perez said it could have shorter matches in order to keep their targeted younger audience interested.

"Young people say the game is too long," he said. "If young people don't watch an entire game it is because it is not interesting enough, or we will have to shorten the games."

He also said that referees and the video review system would be "improved" in the tournament.

"There will be financial fair play and stability. We'll try to select the referees with professional criteria," he added.

When could it start?

Another three teams will be added to the league as guaranteed members, with five more qualifying each year.

Perez said the group want to start the new league by August, should they reach an agreement with Uefa, otherwise it could be delayed by a year.

Uefa president Aleksander Ceferin called the league a "disgraceful, self-serving" plan and a "spit in the face of football lovers".

Ceferin also said that players involved with the ESL could be banned from all Uefa competitions, which Perez denied.

"It will not happen, the law protects us," Perez added.

"We will not get into legal issues. It is impossible. The players should remain calm because the threats won't happen. "This is not a league for the rich, it's a league to save football."

The key developments so far