Four Premiership clubs will be live across BBC Scotland next weekend in the quarter-finals of the Scottish Cup.

Dundee United's trip to face Aberdeen will be on BBC One Scotland at 14:30 BST on Sunday.

And St Mirren's visit to Kilmarnock will be on BBC Scotland on Monday at 19:45, followed by the semi-final draw.

Rangers' home tie with St Johnstone will be on Sunday at 18:30, with Hibernian v Motherwell starting the action on Saturday at 17:00.

Former Fir Park boss Stephen Robinson and ex-Hibs midfielder Scott Allan will be on the Sportscene highlights show on Saturday (22:20), with Richard Foster and James McFadden the guests the following night (22:30) on BBC One Scotland.

Steven Thompson and Michael Stewart will bring you the action from Pittodrie, while Jane Lewis, Leanne Crichton and Marvin Bartley will take you through Monday's tie in Paisley.

There will also be full coverage of all four matches on Sportsound and on the BBC Sport website and app. 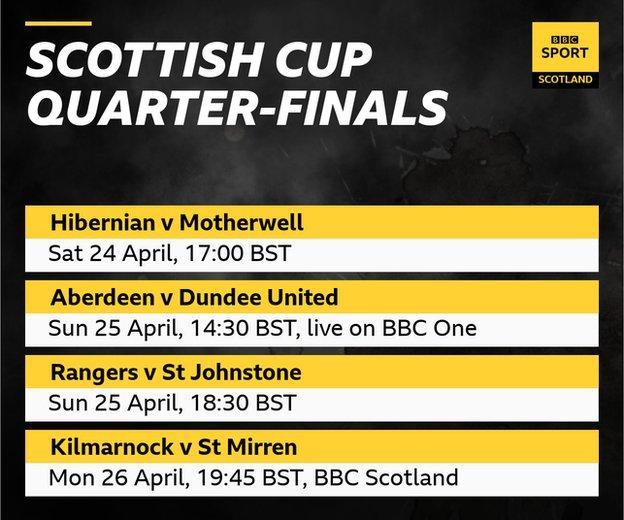