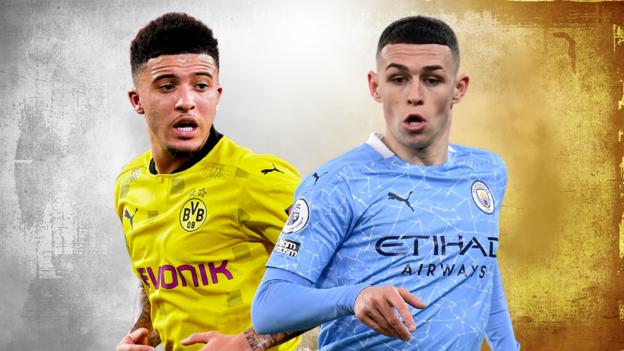 For all the general sense of excitement and anticipation around the return leg of Manchester City's Champions League quarter-final with Borussia Dortmund, there is also a tinge of disappointment.

It should have been a chance to compare former City team-mates Phil Foden and Jadon Sancho.

But Dortmund winger Sancho has been ruled out by the muscle injury that has kept him out of action for a month.

And that is a shame.

City, 2-1 up from the first leg may be relieved at being spared potential embarrassment by someone they helped develop.

But the prospect of Foden and Sancho going head-to-head in a competitive game for the first time would have been an enticing one, given how interlinked their respective careers have been.

This is how two players, who started in the same academy, have taken different routes to the top.

Along with Brahim Diaz, the pair were viewed as the shining lights in an academy set-up that remains the envy of most in the Premier League, and had helped City reach that year's FA Youth Cup final.

"Look at [Jadon] Sancho, you look at Phil Foden you look at Brahim Diaz, these players are extremely talented," said Khaldoon.

"If you ask Pep today, he will tell you they can and will be first-team players at Manchester City."

Sancho and Foden are now both England internationals and have played more than 100 senior games at the highest level.

However, Sancho never made a single appearance for City.

Last month, City manager Guardiola said he had "no regrets" about Sancho's exit for Dortmund in August 2017.

"We wanted him to stay but he decided to leave," said Guardiola.

There was more to it than that, though.

Guardiola previously claimed to have shaken hands on a new £30,000-a-week contract with Sancho in the first months of 2017. This was almost two years before Foden signed one of similar value.

But as the weeks ticked on, Sancho and his advisers began to have doubts about Guardiola's commitment to bringing youngsters through.

The player refused to sign the deal, which triggered Guardiola's decision not to pick him for that summer's tour of the United States. Sancho then stopped turning up for training and City said they would sell him, but not to an English club.

Throughout all this, Foden remained with City. Unlike London-born Sancho, he is a local lad and a lifelong fan. He had no wish to go anywhere.

Numerous loan moves were offered but Foden took Guardiola at face value when he said he would help turn him into the player he evidently had the capacity to be.

Initially, Foden seemed to have got it right and Sancho wrong. Then it appeared the roles were reversed. Now, they are both benefiting from their very different decisions.

When Dortmund paid £10m for Sancho, they gave him their prized number seven shirt - suggesting he had an immediate first-team future. 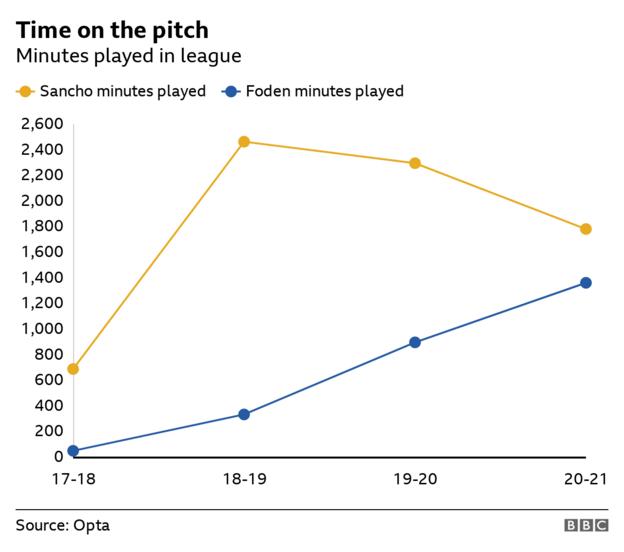 As it turned out, he had to be patient. Sancho was limited to a few under-23 games as Dortmund waited for international clearance.

He made England's squad for the 2017 Under-17 World Cup in India and scored three goals in three group games, but then returned to Germany on club orders. England went on to lift the trophy and Foden was named player of the tournament.

A six-minute senior debut against Eintracht Frankfurt on 21 October and a further late substitute appearance against Bayern Munich two weeks later were some recompense but as autumn turned to winter, Sancho remained on the sidelines.

Meanwhile Foden, fresh from excelling in India, had made his first-team debut under Guardiola and started games against Shakhtar Donetsk in the Champions League and Leicester in the EFL Cup.

Sancho's status at Dortmund began to change in January 2018, when he started three successive games. By the end of the following season, he had become one of the most prominent teenagers in Europe and a full England international.

Bundesliga defences were struggling to cope with Sancho, whose speed and confidence to run directly at opponents is a bit of a throwback to the old-style winger. A return of 12 goals and 14 assists was enough to have him crowned the German top flight's 'assist king' and get him named in its team of the year.

England boss Gareth Southgate had taken note and gave Sancho his first England call-up in October 2018. Until last month's injury-enforced absence, he had been in every senior squad since and now has 18 caps.

Now it was Foden's turn to have to wait. In June 2019, he was part of a disappointing European Under-21 campaign, starting two games and scoring once as England went out in the group phase.

The midfielder's first Premier League start of 2018-19 did not come until 3 April. Before that, he had played a total of 98 minutes in the league that season, across 10 substitute appearances. Now it looked as if Foden and his camp had called it wrong.

Questions around Foden and his handling by Guardiola did not start getting answered properly until autumn 2019, when he began to start key games and his substitute appearances got longer.

Just prior to the UK's first lockdown - and a three-month suspension of English football - in March 2020, Foden completed the full 90 minutes in the EFL Cup final and the Manchester derby. As the season was concluded following its resumption in June, he was involved in 12 of City's final 14 games.

A start against Liverpool in the league in July, and another against Real Madrid in the Champions League in August, were further evidence of Guardiola's growing faith in Foden and a recognition of tangible progress in his development.

That development has continued. Always viewed as a creative player, Foden has taken his goalscoring to another level this season. 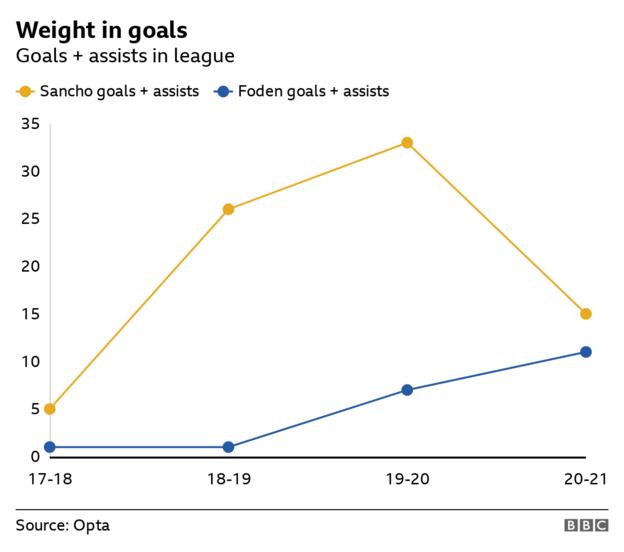 At City, only Ilkay Gundogan, Raheem Sterling and Gabriel Jesus have exceeded the midfielder's tally of 12.

During a run of 27 wins in 29 games, which has taken City clear in the Premier League and gives them a shot at becoming the first English team to complete the quadruple, Foden has started 17 times and made a further seven substitute appearances.

He only made his international debut in September but he has become a key man for club and country.

Guardiola has demanded much, particularly in terms of awareness and decision-making. He feels that getting that right would allow Foden to be as effective down the middle as he is attacking from wider areas.

And now, it seems, his handling of the youngster has been spot on.

Years still to come at the top

Foden is only 20, Sancho just 21, but both are now at a stage where they are setting examples for others to follow.

Both know they face far more scrutiny now than when they were emerging. Three years ago, the pair were dropped for an England Under-19s game as punishment for being late to training. Such behaviour would attract much more attention now.

During his rise to the top, Foden has relied on the guidance of Richard Green, and was affected deeply by the former Liverpool legal adviser's Covid-related death at the beginning of the month. The pair were close; a devastated Foden has paid emotional tributes to Green on social media.

Both Foden and Sancho have given every sign, though, that they have what it takes to be top-class players for years to come. Both have been outstanding in 2021 so far.

Sancho's success has proved that it is possible for a young English player to be a success in another country. It is a path that has been followed by Jude Bellingham, now a Dortmund and England team-mate.

With the speculation around Sancho's future intensifying once more, it is surely only a matter of time before the pair will be on the same pitch, vying for supremacy.

It may not be in the way he intended but Khaldoon was correct in 2017 when he said Sancho and Foden were destined for the top.