Babajide, 22, posted a screenshot of the abuse, posted to her via Instagram, with police now investigating after it was reported to them by her club.

The message said that "football is only for men", and was followed by a racist remark.

Babajide and a number of her followers have reported the offending account.

"I wanted to speak up about it because I have stayed silent for so long," Babajide told BBC Sport.

"I just feel, as a black woman in this game, I am conditioned to it. It happens so regularly. It's more exhausting than anything. I've gone past the point of being disappointed or hurt by it.

"Some days it is harder than others. I try to shrug it off and carry on with my day but sometimes it is hard."

Babajide, who was called up to a first senior England training camp in September and has represented the national team at youth level, received support from the Lionesses on Twitter.

Edleen John, the Football Association's director of international relations, corporate affairs, and co-Partner for equality, diversity, and inclusion told the BBC: "It's completely abhorrent and unacceptable that players continue to be subjected to discriminatory abuse online.

"It's traumatic on a personal level to each victim of abuse, and we stand with all players that continue to be targeted by online hate.

"The reality is that online abuse has no real-world consequences and this needs to change quickly. We continue to urge social media companies to do more so action can be taken against perpetrators."

In a statement, Liverpool said: "This racist and sexist attack on LFC women's Rinsola Babajide has been formally reported to the police and an investigation is under way.

"Rinsola will continue to be offered our fullest support as well as that of the relevant authorities. LFC condemns all forms of discrimination and we reiterate - it is completely unnecessary and it has to stop."

In response to the racist abuse directed at Babajide, a spokesperson for Facebook, which owns Instagram, said: "There is no place for discriminatory abuse on Instagram and this comment has been removed for breaking our rules.

"We recently announced tougher measures to tackle this behaviour and we are committed to doing everything we can to fight hate and racism on our platforms." 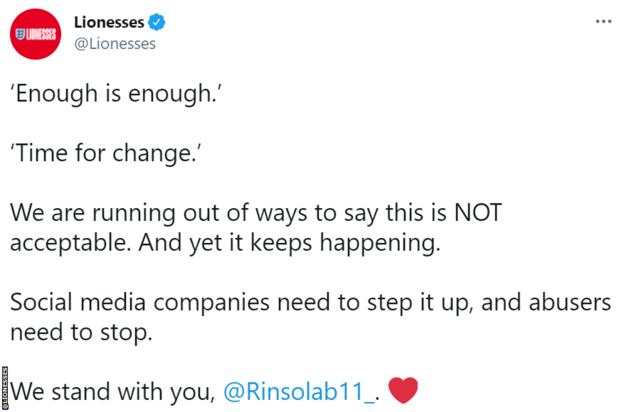 Babajide said she immediately told her agent about the abuse and that he has yet to receive a response from the relevant social media platforms after contacting them.

"It happens weekly and regularly. People have asked questions like 'why don't you date people from your own race?'" said Babajide.

"I get sent vile words to describe my colour, my race or even my gender. They question the right for me to be playing this game.

"I get comments off men and women but a lot of it is stuff like 'go back to the kitchen' or 'women shouldn't be playing football, it's a men's sport'."

Babajide said she has a "strong support system" but got to the point "where I needed to speak out".

"Actions need to be taken and accountability needs to be taken by the platforms. It is a big problem," she added.

"As professionals, we are held accountable for everything but when we report things, nothing really gets done. We shouldn't have to face any of it, especially in 2021."

Liverpool men's boss Jurgen Klopp was asked about social media abuse on Friday and he said it needed to be sorted "as quickly as possible".

"Social media in general has a problem that hasn't been sorted yet that people can hide behind whatever account and say what they want to say," he added.