Former Bournemouth manager Eddie Howe is not close to joining any club and will not return to management until the summer at the earliest despite interest from Celtic, according to the 43-year-old Englishman's agent. (Sky Sports)

Celtic striker Odsonne Edouard is on a three-man AC Milan summer signing shortlist along with Arkadiusz Milik of Marseille and AZ Alkmaar's Myron Boadu should the Serie A club be priced out of securing main targets Dusan Vlahovic of Fiorentina or Andrea Belotti of Torino, according to Corriere dello Sport. (Corriere dello Sport via Daily Record)

Scotland striker Leigh Griffiths, who could attract interest from Aberdeen, fears he could be freed by Celtic this summer as there is a 30 April deadline on the Glasgow club triggering a £1m one-year extension to the 30-year-old's contract. (Scottish Sun)

Scotland centre-half Jack Hendry has confirmed that Oostende are pushing to try and sign him on a permanent basis from Celtic, but if the Belgian top-flight club fail to agree terms with the 25-year-old, he will return to Glasgow with Burnley, Genk and Wolverhampton Wanderers among his other admirers. (Daily Record)

St Johnstone manager Callum Davidson insists he is fully focused on securing new contracts for his current players before entering the transfer market for new signings after being linked with a bid to sign 30-year-old Dundee United midfielder Peter Pawlett on a pre-contract agreement. (The Courier)

Hibernian owner Ronald Gordon has stressed the Easter Road club will not be forced into selling prized assets like Josh Doig, Kevin Nisbet and Ryan Porteous for cut-price fees this summer despite posting a £1.4m loss amid the Covid-19 pandemic. (The National)

Should Aston Villa sell Scotland midfielder John McGinn, who is under contract until 2025, Hibs would be due 15% of the overall price for the 26-year-old, with St Mirren allocated 30% of the Edinburgh club's slice. (Edinburgh Evening News)

Striker Ivan Toney has revealed for the first time that he was close to joining Celtic last summer and the 25-year-old striker believes that he would have helped them secure a 10th consecutive Scottish league title had he gone there instead of Brentford from Peterborough United. (Scottish Sun)

Nigerian striker Umar Sadiq, who had a poor loan spell with Rangers cut short in 2018 after just one start, has been linked with an incredible £52m move to Bayern Munich after the 24-year-old impressed during spells with Perugia, Partizan and now Almeria. (The Scotsman)

Neil McCann, who has been in interim charge of Inverness Caledonian Thistle during John Robertson's leave of absence, has stressed he is not looking beyond his current role and a way back into management permanently. (Press & Journal)

Scottish Conservative leader Douglas Ross has suggested that the World Cup final could be played at Hampden Park as part of a future joint-UK bid for the tournament. (Glasgow Evening Times)

Innovative and wearable technology, developed by start-up company HIT at the Edinburgh Business School (EBS) incubator at Heriot-Watt University, that can measure and track the force of head impact in sport is set to benefit research on the risks of brain injury. (The Herald) 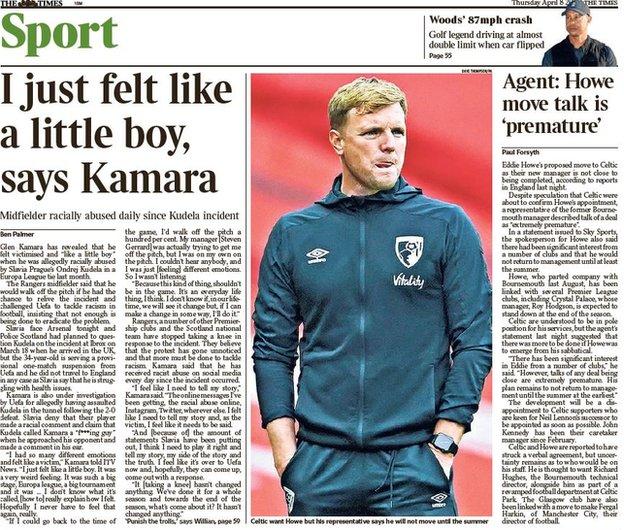 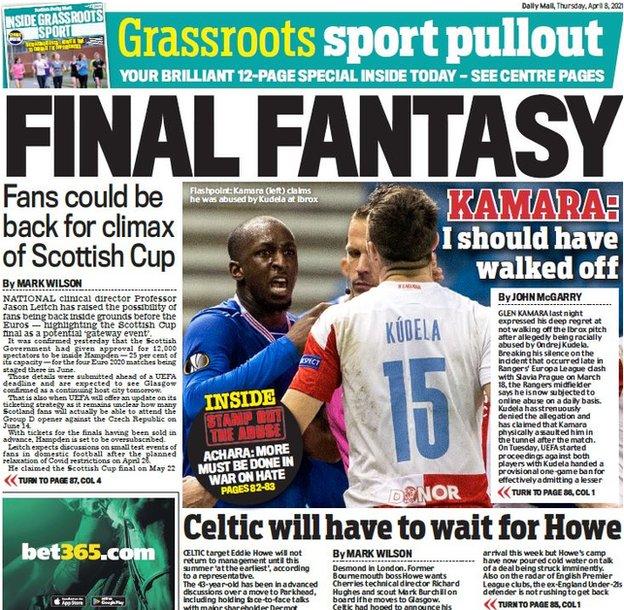 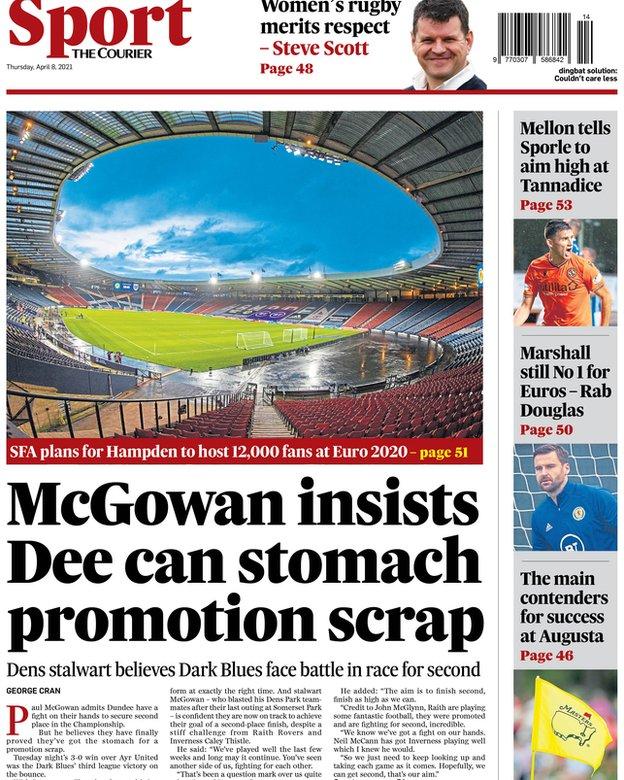