Fulham manager Scott Parker believes the video assistant referee is "killing" football's excitement but added his side will not surrender in their fight to avoid relegation.

Fulham were beaten 1-0 by Tottenham on Thursday after Josh Maja had a deserved second-half equaliser disallowed.

Mario Lemina was penalised for handball in the build-up, despite his arm being by his side as a clearance struck him.

"I'm complaining at the rule. We want it to be the most entertaining league in the world, with goals. I don't know what [Lemina] can do. We just need some common sense. We are trying to make football so pure and sterile it becomes unrealistic."

He added: "We want to see goals and excitement but I am sorry to say that VAR is killing every part of that. You are losing the raw emotion of the game we absolutely love." 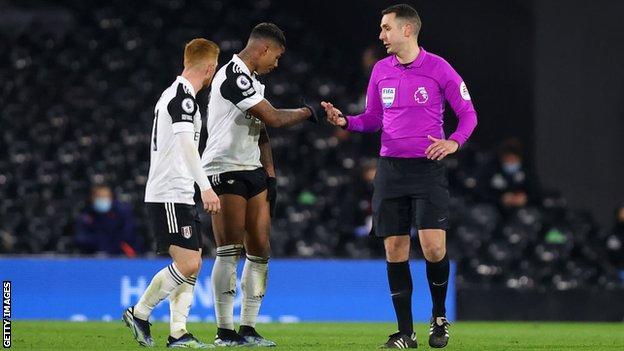 The International Football Association Board - football's law makers - meets on Friday and further clarification on the handball law before next season is expected to be discussed.

IFAB said in December it would consider offering further clarification "given that the interpretation of handball incidents has not always been consistent".

Speaking on BT Sport, former referee Peter Walton said: "Handball is number six on the agenda. There is the possibility of a change in that rule on 1 June. They will look at the clarity and propose certain changes to make it easier for us all to understand what the law is.

"The law was changed this year for clarity. It is black and white - if it touches your arm and leads to a goal [it is disallowed]. What people can't accept is if it happens to a defender it isn't a penalty kick - why not?"

"I don't know what Lemina is meant to do," said Upson. "Are you supposed to dive out of the way of the ball?

"We see these decisions week in, week out, and you feel for Fulham here, this is a disappointing decision. I think it's very harsh on Fulham."

Fulham remain three points from safety following the defeat at Craven Cottage and they have now played one game more than Newcastle and Brighton, who sit directly above them in the standings.

But Parker's side have given themselves hope of achieving survival, having gone five games unbeaten prior to facing Spurs.

They were 10 points adrift of 17th-placed Newcastle only 19 days ago.

"We have put ourselves in a fantastic position," Fulham boss Parker told BT Sport. "We need to keep believing and it is performances like tonight that can give us heart. There is no way we will surrender. We have got a chance."

He added to BBC Sport: "I'm very proud of the team tonight. [Tottenham] are a top team and I felt we gave them more than a run for their money tonight. We just fell a little bit short."

What did you make of the disallowed goal?

Here are some of the comments you sent in to us regarding the handball decision during Thursday's Premier League live text:

Dan: Spurs fan here but that disallowed goal was harsh. If Lemina's arm, which was in line with his body, was not there it would have hit his body and done exactly the same.

Craig: Ironically if he puts his arm in an unnatural position high above his head, the ball hits his hip and the goal stands. What is he supposed to do? That's a disgusting decision.

Olly: How on earth can Lemina get his arm out of the way there?! The definition of natural position!

Daniel: Lemina's arm is by his side!! How on earth is that a handball?? VAR has cost Fulham 6 points so far this season and it looks set to get worse. Utter disgrace.