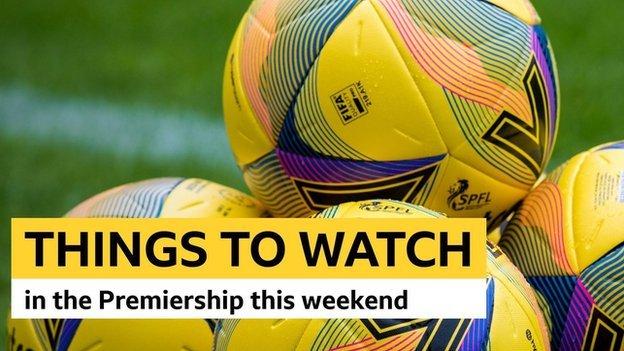 This weekend could be a momentous one in Scottish football as a first Premiership title in 10 years beckons for Rangers.

To get over the line - and make history with the earliest Scottish title win in chronological terms - they'll have to take care of business against St Mirren and hope for another Celtic slip-up in a season littered with them.

Elsewhere, there's a huge relegation tussle in the Highlands, and Hibs' strikers try to locate their shooting boots for a trip to Scottish League Cup victors St Johnstone.

Here's what to look out for...

Having waited so long, Rangers are in a rush to get the title wrapped up, especially with a Europa League last-16 showdown with Slavia Prague looming. It's not quite clear cut, though, with Celtic a big part of the equation despite a chasm of a points difference.

So, let's break down the different outcomes. If Rangers win against St Mirren on Saturday, and Celtic draw or lose at Dundee United the following day, the title is done.

Should Rangers draw with St Mirren, then only a Celtic defeat at Tannadice would be enough to settle it. And a Rangers loss - which would be their first of the domestic season - would keep them waiting.

If this weekend is to prove decisive, it would be fitting that Rangers' clinching victory comes against the only team to beat them this season.

St Mirren caused a sensation with a thrilling 3-2 League Cup quarter-final win in December, but Steven Gerrard's side got their own back with a league victory in Paisley later that month, and now the chance of further - and even sweeter - payback looms.

Their respective records point to Rangers keeping up their side of the bargain. Gerrard's men have a perfect tally of 15 league wins at Ibrox this season, while St Mirren have lost all eight visits since their last point there a decade ago.

Gloves are off in survival battle

While the battle at the top has lacked nail-biting suspense this season, the struggle for survival at the other end of the table has made up for it.

Relegation scraps don't come much bigger than Kilmarnock's trip to Ross County on Saturday. County are a point and a place better off than the second-bottom hosts, but have played a game more, and the outcome of this Highland tussle could be huge in the final shake-up.

New Kilmarnock manager Tommy Wright has at least stopped the rot of eight straight defeats - only three of which came under his watch - with a first point of his tenure coming against Dundee United.

The Rugby Park side also ended their 571-minute goal drought in that battling draw at Rugby Park and although they have the worst away record in the division - losing nine of their last 10 - Wright has a habit of successful jaunts to Dingwall.

During his seven years as Johnstone boss, the Northern Irishman was unbeaten in his seven Premiership away games at County, winning four and drawing three.

Can it be all Wright in the Highlands again?

With Hibs embroiled in a fight for third place with Aberdeen, their strikers have chosen an inopportune time to go missing.

Kevin Nisbet - perhaps affected by the club knocking back a January bid from Birmingham - has gone seven matches without a goal and netted one in 11.

Christian Doidge's drought is even worse, with the Welsh forward's last goal coming 14 games ago in mid-December.

Yet, until last weekend, Hibs were on a roll with four straight victories. And the main reason they hadn't gone off the boil was Martin Boyle. The Scot who turns out for Australia helped keep his home city club of Aberdeen at arm's length with goals - five in total, half his season's tally - in all four of those Hibs wins.

The flying winger must surely be a player of the year contender.

A jolt was delivered by Motherwell who left Easter Road with a shock but deserved victory last weekend, and it doesn't get any easier for Jack Ross' men on Saturday with a trip to an ebullient St Johnstone side still riding the wave of League Cup euphoria.

The Perth side haven't given up hope of a late smash and grab top-six finish. Hibs could do with their frontmen finding their shooting boots.

Managerless Celtic on a delaying mission

The title is long gone for Celtic, so the main game occupying supporters' minds now is managerial bingo as a flurry of names are linked with the job recently vacated by Neil Lennon.

From Steve Clarke to Rafa Benitez, Eddie Howe and Henrik Larsson to the more obscure - step forward Enzo Maresca and Bruno Lage - the list of rumoured contenders grows by the day.

For now, John Kennedy is steering the ship until the end of the season and he can't be totally discounted prior to the summer shake-up at Celtic Park.

However, Kennedy, perhaps tainted by association having been Lennon's assistant, would likely need a blistering run akin to Usain Bolt with a rocket on his back if he's to get the job full-time.

The interim boss made a winning but shaky start last weekend as Celtic eked out a nervy 1-0 win over Aberdeen and takes his team on Sunday to a Dundee United side still bidding to squeeze into the top six.

It's something of a Catch-22 for Kennedy's men. Anything other than victory will likely see Rangers crowned champions, while a Celtic win would mean Rangers have the chance to secure glory in their next fixture - which just happens to be the Old Firm derby at Celtic Park.

Whatever happens, it should be a fascinating watch.