Successive losses for the Magpies mean they are three points clear of the drop zone, while 18th-placed Fulham have earned seven points in a week.

"Fulham have had a good week and won a couple of games, which at the bottom end of the table is big," Bruce said.

"My message to the supporters is that I'm convinced we'll be OK."

Following a win over Southampton two weeks ago, which came shortly after victory at Everton, Newcastle were 10 points clear of the bottom three.

But that game proved costly when Newcastle lost top-scorer Callum Wilson to a hamstring injury and there were further injury blows to defenders Fabian Schar and Javier Manquillo. 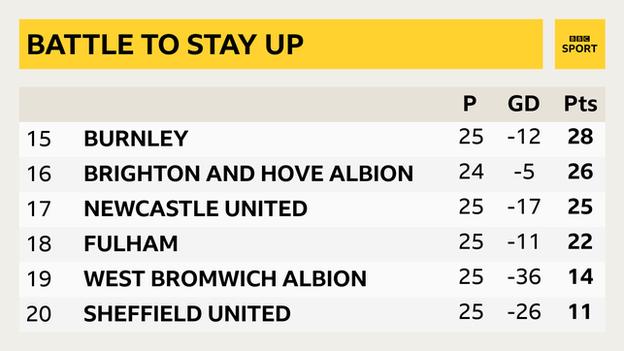 Forward Joelinton suffered what Bruce described as a "groin or hip problem" in the second half of the 3-1 defeat at Old Trafford, during which Allan Saint-Maximin scored his first goal since returning from a two-month absence because of coronavirus symptoms.

After a positive performance for the first hour of the game, Bruce called Joelinton's 55th-minute substitution "the big turning point" and said he hoped "it's not too serious".

Bruce says he understands why fans might be "anxious" about the team's position in the table, particularly after a week in which Fulham have won twice and drawn once.

Newcastle were last relegated in the 2015-16 season but bounced back to win the Championship a year later.

Asked if it was a gloomy situation, Bruce replied: "I agree with you, it's gloomy, but I was pleased with the performance today, especially in the first hour, but you have to turn those performances into results and I'm still quietly confident we will get the results we need.

"Of course fans don't want to see their team at the wrong end of the table, I understand that totally. We have a unique fan base which makes us the club we have got, and of course they are anxious."

Next four or five games are Newcastle's season - Shearer

Former Newcastle striker Alan Shearer believes how they perform in those matches could be season-defining.

"They are missing their best player in terms of their goal threat in Callum Wilson," he said on Match of the Day 2.

"The next four or five games are Newcastle's season, particularly with the form they are in."