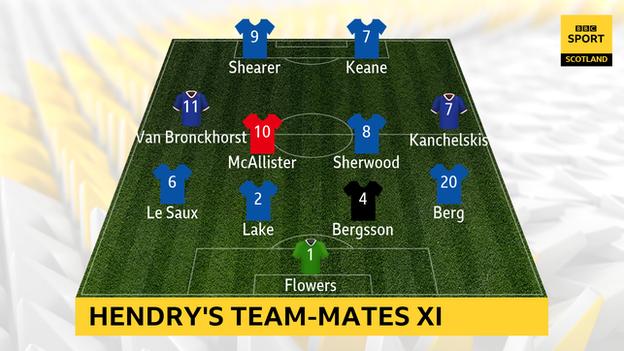 Born in the small Moray town of Keith, Colin Hendry went on win the Premier League, a Scottish domestic treble and captain his country while racking up over 50 caps.

The defender, now 55, played for eight senior clubs, including Blackburn Rovers, where he won the English title in 1995, Manchester City and Rangers, where he was part of Dick Advocaat's all-conquering squad in 1999.

It comes down to Andy Goram and Flowers, but I played in front of the Englishman much more than anyone. He was exceptional in the season that we won the league with Blackburn Rovers in 1994-95 so I'm going with him.

Berg was probably one of three, at the very most, where you got 7.5/10 every game. You never got a four, five, six, it was at least 7.5 every game and the consistency he showed as a footballer was quite incredible at times.

Bergsson was just like me when I got towards the end of my career. I could still hack it, produce, man up against the younger ones coming up. He was not the greatest footballer but he had a hell of a great attitude. Bergsson really reflects a lot of how I was throughout my career.

A lot of people might not even know about Lake. I played with him at Manchester City, he was in the FA Youth Cup-winning team that came through the system. He'd be my captain in this team. Were it not for injury, he would easily have gone on to play for England and at the very highest level without a shadow of a doubt. He had everything.

Le Saux had an engine and a half. He was exceptional and went on to be a big part of the England set-up. He had a lot to prove when he joined Blackburn Rovers and he left to go back to Chelsea and proved that he could do it on the big stage.

I've gone with Kanchelskis on the right, you could understand why he was part of a successful Manchester United team. And on the left, Van Bronkhorst, who went on to win the Premier League with Arsenal and then go to Barcelona. It's really difficult to look past these two.

In the centre of the park, I've got probably the best all-round player that I played with, which was McAllister. He showed his capabilities because he went to Liverpool and he was the one player that took them forward when they won the treble - League Cup, FA Cup, Uefa Cup - at the ripe old age of 36.

And alongside Gary is my captain at Blackburn Rovers, Tim Sherwood, who was a massive figure in the dressing room.

The obvious number nine candidate is Shearer. A world-class striker, and he could easily have been the world's greatest striker at the time.

The other one might surprise you - Keane, who I played with at Coventry City. He came from Leeds and went on to great things, played all over the world and I think at times he was really, really underrated. But I tell you, he was world class. He showed that through what he did in his career.