Kilmarnock started last season in the Europa League qualifiers after Steve Clarke's midas touch had guided the club to the dizzying high of a third-place finish.

Nineteen months - and three managers - later, they are lumbered with the longest current losing run in top-flight European football.

Saturday's 1-0 reversal at Aberdeen was an eighth consecutive defeat for the Scottish Premiership side - and their 13th in 16 games - edging them close to the nightmare prospect of relegation.

After 28 years in the top division - only Celtic, Aberdeen and Motherwell have longer unbroken stints - is Kilmarnock's Premiership stay coming to an end?

How bad is their predicament?

It's not an exaggeration to say Kilmarnock are in freefall. Ross County's shock win over Celtic has left the Rugby Park side in the relegation play-off spot, with only goal difference keeping them above bottom club Hamilton Academical. Both those rivals have played one match fewer.

Motherwell, four points ahead with a game in hand, look like the only other side still involved in the dogfight.

On a points-per-game ratio - the formula that decided last season's curtailed campaign and helped spark a summer of mayhem - Kilmarnock are rock bottom. They are averaging 0.80, with Hamilton on 0.83, and County on 0.90. 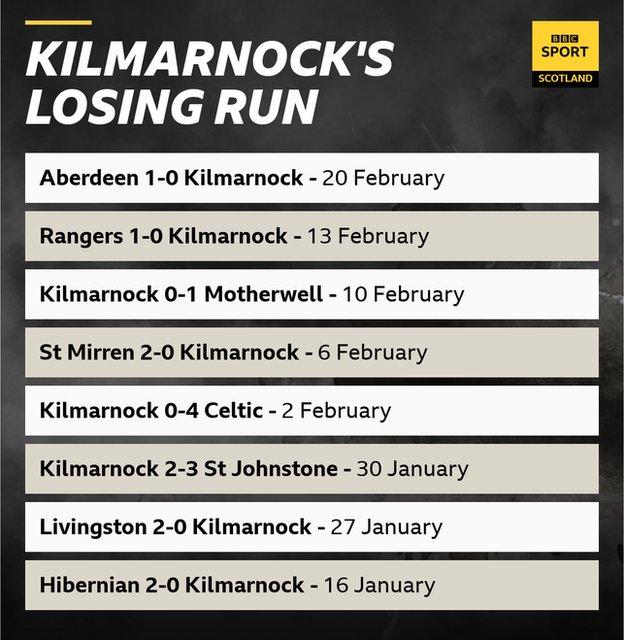 The recent change of manager at Rugby Park - former St Johnstone boss Tommy Wright took charge after Alex Dyer was jettisoned - has had little effect. Hopes of a bounce have given way to more of that sinking feeling.

Wright's three games in charge have all ended 1-0 to continue the losing trend that stretched to eight games at Pittodrie. And away from home, Kilmarnock's record is abysmal - 10 points from a possible 48, nine defeats in their past 10 without scoring.

So, how do they save themselves? The run-in looks kind, at least, with their three games before the split all against current bottom-six sides. The visits of Dundee United and Motherwell bookend a trip north to face County. Relegation six-pointers galore.

What are the main problems?

A chronic lack of cutting edge stands out. When Aberdeen ended their club record six-game drought at Kilmarnock's expense, the misfiring mantle was handed to the Ayrshire side.

In those eight defeats in a row, they have failed to score in seven. Their barren run without a goal now stands at five and a half matches - or 508 minutes to be precise.

Kilmarnock are averaging less than a goal per game in the Premiership - they've netted 26 in 30 matches - and only Ross County have scored fewer.

Chris Burke is the Rugby Park side's top scorer with seven goals, but only one of those came this year. Nicke Kabamba is joint next with five, the last of which came in November, and the striker's lack of confidence shone through at Pittodrie as he passed up Kilmarnock's best chances.

George Oakley was signed last month - four days before Dyer's exit - and has still to break his duck after four appearances, while Wright has rolled the dice on maverick striker Kyle Lafferty.

The 33-year-old former Rangers and Hearts forward has signed for the rest of the season and made his debut off the bench against Aberdeen. Wright is convinced the talented but temperamental striker will "make a difference".

While it's easy to point the finger at strikers, they are not helped by a crippling lack of quality service. Wright's game-plan involves getting the ball wide and sending plenty of crosses into the box, but too often the deliveries fail to find a target.

Wright has brought greater defensive organisation, as evidenced by the narrow defeats on his watch. But costly lapses - such as leaving Aberdeen's Callum Hendry unmarked to head the winner - stall any progress.

Kilmarnock's 42 goals conceded is fewer than Motherwell, County and Hamilton. However, a further blow was delivered at the weekend as Wright confirmed Scotland centre-back Stuart Findlay is poised to leave for MLS outfit Philadelphia Union.

The big worry for Kilmarnock is Tommy is searching for his best formation, his best personnel, and if he doesn't get it sorted quickly he is going to run out of games. They need to find that balance soon to have a platform to work from.

Lafferty brought much-needed nous on Saturday and got his team up the park. He was a focal point and offers something different, but the strikers need a better quality of delivery. If they get that, they are capable of scraping their way out of the relegation battle.

It's a big job for Tommy. His biggest concern is the lack of goals - they don't seem to be creating chances or scoring. You look on paper at their team and find it hard to believe but we all said that last year about Hearts, no one is too good to go down.

Kilmarnock will be very concerned. The light at the end of the tunnel is their games before the split - that's where Tommy really needs to work his magic.