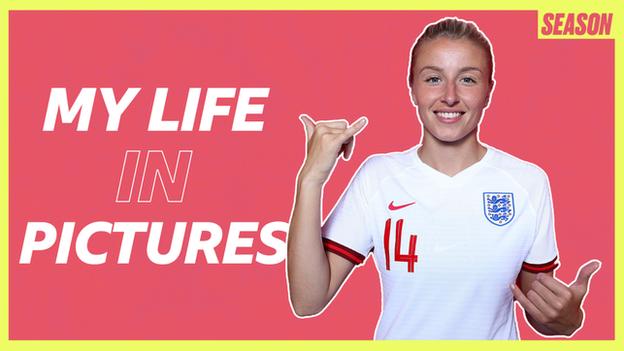 England international Leah Williamson has made more than 150 appearances for Arsenal, where she has gone from the youth academy to a league champion. Here she talks about her life in pictures.

From gymnastics to football

When I was younger, my mum was told to take me to gymnastics or to horse riding to help with the turn out of my feet. Gymnastics is such a weird environment. You look and think 'Awww, that's so cute' but actually I was so well drilled as a five-year-old that I didn't want to put a foot out of line.

When I was buying my leotards, I always wanted the one that Beth Tweddle had, because she was our star. I do enjoy watching it when it's on the telly in the Olympics. I love it because I know how hard it is.

The viral videos of the UCLA gymnastics team are so cool. But it makes me laugh because I still remember my floor routine music - it was like classical English. Then I watch those and I'm like, 'Why did nobody ever make me one of those routines?'

I quit when I went to Arsenal, just because the balance would have been a bit hard. Every single time I walk into the gym at football and look up for my third set of chin-ups, which are so hard now, I think, 'Leah, you used to have to do 100 of these in 10 minutes, this is nothing.' The foundation it gives you is like no other.

I learned to play Shania Twain on the piano

At the start of lockdown, like everybody was, we started doing Zoom quizzes.

I actually think I'm a good quizzer. Alex Scott always says this about me - she laughs at me, because I just come out with random facts all the time. I just know stuff about stuff.

I think the biggest thing I've picked up during lockdown has been learning to play the piano. I got a keyboard for my birthday last year. I've played 10 minutes a day since the first lockdown so I'm actually really sticking with it.

I think the one song I've learned that I'm very much into is Shania Twain's You're Still the One, which is a classic. I asked Jordan [Nobbs, Arsenal team-mate] the other day: "This sounds good now, doesn't it?" She was like, "I'm not sure" ... but I think I'm getting there!

Without a doubt, I'm most looking forward to concerts once restrictions are lifted. I went to a drive-in concert and that was great, it was Rick Astley and Gabrielle. Honestly, it was so good.

At that time, you could mix two households outside so it was my mum, my grandma, then me and Jordan. We had such a good time and I'm a big 'Don't touch me' kind of person at concerts, so not being near anyone was fantastic.

The first person I ask to gigs is my grandma. She's always loved live music. There are concerts where she has definitely been the oldest person in the room, and concerts where I've been the youngest by a long shot.

We had a special time seeing Sam Smith at Somerset House. He sang Stay With Me and brought out Mary J Blige, and my grandma was like, "Wooooh!" and started screaming. I just looked and I thought, 'God, you're so cool. You're just actually so cool.'

I've always said fashion is less about what people think I should be wearing, and more about expressing myself and how I feel.

I will ask Jordan: "Do I look OK?" And she goes: "I mean, nobody else is going to be wearing that." But I don't care if everybody's going in heels and I want to turn up in loafers. It doesn't bother me what the crowd is wearing.

From left to right:

I was at the Pride of Britain awards here and I felt really confident in that dress. Because I don't own make-up, I went into my hairdressers and just said: "Glam me up." I really enjoy dressing up as long as I feel confident.

If you're wearing a suit, you just feel really self-assured and powerful. I love Princess Diana's style, especially when it comes to my suits. I follow so many accounts that post pictures of what she used to wear.

I saw this Star Wars shirt in the men's section of a vintage pop-up and had a 'That's So Raven' moment. My eyes popped and I told the shop assistant: "I'm going to buy this." That whole outfit is what I love about London. Nobody even blinks when they walk past me because you can just be yourself.

A jacket for every outfit

I bought this jacket with no idea of how to wear it and now I throw it on with every outfit. I feel so comfortable, hand in the pocket, that's naturally how I've reacted to taking a picture in the coat. I must have seven different shirts to switch up that one outfit.

Straight away, I was like: "I need to make Keira my friend." And even if I was a bit scared of her, we were inseparable from my first camp and have been best friends ever since.

Knowing I can't just go up to Manchester and see her is definitely difficult so I probably treasure the time at camp more than I normally would.

She really kept it to herself how much she was struggling with criticism during the World Cup. But even now, it makes me laugh as she'll say because I wasn't playing she didn't want to be bog me down with anything. She was having a really hard time and was still thinking about me first.

I'm literally so grateful for her and it's obviously lucky we both turned out to be OK at football.

My brother and dad are Spurs fans but my family are my biggest supporters. So it's quite a passionate and loud house on an Arsenal matchday. They come to every single moment they can be involved in and travel the world to watch me.

Both sides of my family are really active. My dad organises a garden Olympics every single year. We're always doing something and enjoy it as much as each other.

We're always there for each other, the most present people in each other's lives, which I think is a big thing. I thought that was normal when I was younger, but obviously as you get older, you realise that not all families spend as much time together as we do. It's something I'm definitely grateful for, just because it's a rarity really.