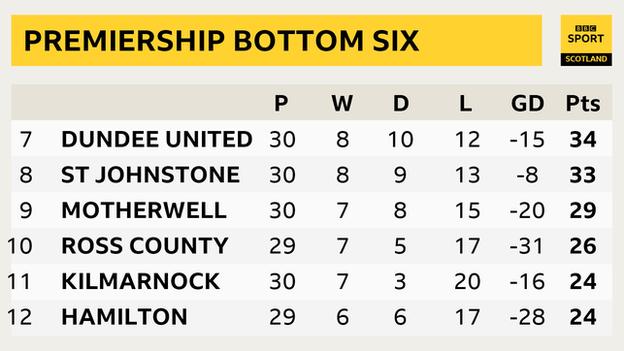 As the Scottish Premiership's conclusion draws nearer, heart rates continue to increase among fans of clubs at the wrong end of the table.

Up to four clubs will be sweating over their top-flight status, as just five points separate ninth-placed Motherwell and bottom-club Hamilton Academical.

With just a handful of games to play before the split, BBC Scotland looks at how many points typically secure safety, how many it will take this term and which side has the toughest run-in.

Prior to the start of every season, managers and pundits alike stress the need for likely relegation candidates to hit the coveted 40-point mark.

Since the Premiership play-offs were brought back in for the 2013-14 season, no club has been required to reach 40 points to ensure their top-flight safety.

In fact, no side has ever needed 40 points to survive in Scotland's top tier since 38-game seasons were reintroduced in the 2000-01 campaign.

From 2013-14, an average of 35 points has been enough to keep teams away from the foot of the table and the dreaded 11th-place play-off spot.

How many points will it take this term?

So, this is where it gets complicated. Hamilton currently sit below 11th-placed Kilmarnock, but the fact Tommy Wright's men have played more games means the Ayrshire club have the league's worst points-per-game average.

Kilmarnock's current ratio stands at 0.80, whereas Hamilton sit on 0.83. Ross County boast a figure of 0.90 after securing a monumental victory against Celtic on Sunday.

As for Motherwell, Wednesday's goalless draw away to St Mirren has the Fir Park club on an average of 0.97.

So, at this rate, a final tally as small as 31 could be enough to secure 11th spot, although post-split fixtures may nudge up those averages with relegation rivals all facing off against each other. Just a couple of extra points may well be enough to avoid the play-off, too.

Given that, it would be safe to assume Dundee United and St Johnstone have all but confirmed their top-flight status. Whereas Motherwell would need just one win from their remaining eight fixtures to hit the current safety net.

With Hamilton on course to earn at least 31 points, that would mean Kilmarnock have to secure a minimum of seven points from their final eight games to avoid finishing 12th - albeit that would be reliant on having a better goal difference.

While that does not seem such a harrowing task, the Ayrshire club have failed to pick up a single point in their past eight Premiership fixtures, so the threat to their survival is clear. If fans did not realise before how big a job Wright has on his hands at Rugby Park, they do now.

County, though, have done themselves a huge favour by overcoming current champions Celtic at the weekend. It could be that five points from nine games is enough for John Hughes' side after that statement victory.

Who has the toughest run-in?

The amount of fixtures teams have remaining before the split varies, as does the level of opposition.

Hamilton have a tricky run-in, as they face three of the league's current top six in their next four games - including tough trips to Aberdeen and Livingston.

County's fixtures also do not look too favourable, as the Highlanders face Hibernian, St Mirren and St Johnstone - as well as Kilmarnock - in their next four Premiership matches.

As for Kilmarnock, they have no pre-split fixtures remaining against top six sides. Instead, Wright's men welcome Dundee United on Saturday before a crucial double-header against County and Motherwell.

Following heavy defeats by Lanarkshire rivals Hamilton and St Johnstone, and a draw with St Mirren, Motherwell face a tough trip to Easter Road at the weekend.

A clean sheet in Paisley will be a huge positive for Graham Alexander but, with several key players still missing from his depleted squad, the Fir Park club are still a long way away from safety. 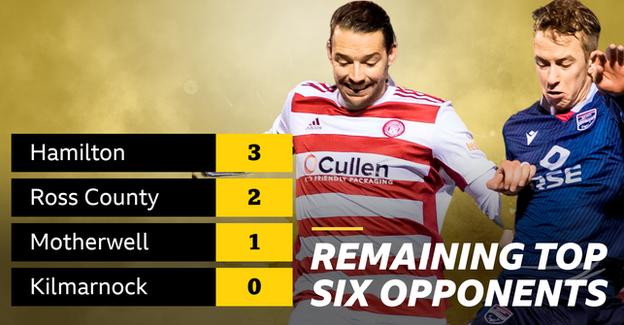