Derek McInnes has left Aberdeen after eight years in charge with the side fourth in the Scottish Premiership.

The 49-year-old, who was contracted until 2022, was the Scottish Premiership's longest-serving manager and won the League Cup in 2014.

But Saturday's draw with Hamilton made it one win in nine matches and Aberdeen have scored just five times in 2021.

Chairman Dave Cormack said he and McInnes felt it was the "right time for him to step down".

The departing manager also thanked the club and fans and said his "motivation to deliver success has never wavered".

The former St Johnstone and Bristol City boss exits along with assistant Tony Docherty, with whom he reached four cup finals and qualified for European football seven years in a row.

Cormack says the recruitment of a new manager will start "immediately". Paul Sheerin, supported by Barry Robson and Neil Simpson, will lead the first team on an interim basis. Aberdeen's next match is against league opponents Dundee United at Tannadice on 20 March.

How did it reach this point?

McInnes was appointed - and loyally supported - by former chairman Stewart Milne, who stepped down in 2019 to be replaced by Atlanta-based businessman Dave Cormack.

McInnes has had to cope with the loss of key players like Scotland internationals Ryan Jack, Kenny McLean, Graeme Shinnie and Scott McKenna in recent campaigns, all of whom he helped develop.

More recently, injuries to Ryan Hedges and January signing Fraser Hornby have not helped McInnes' cause and fans have grown frustrated with the team's conservative approach.

Speculation over McInnes' position grew following last month's defeat by Hibernian, who are three points ahead of the Dons with a game in hand.

Cormack thanked McInnes and Docherty and said the manager had "raised the bar and delivered a level of consistency not seen at the club for many years".

"Clearly, results since the turn of the year have been disappointing and frustrating for everyone," the chairman added.

"The club now has the opportunity to appoint a new manager ahead of the new season where, with a number of players out of contract, we have work to do to build a competitive squad."

Has he been successful?

McInnes, who led St Johnstone to top-flight promotion in 2009, took over from Craig Brown at Aberdeen in April 2013 with the Pittodrie club struggling in the bottom half of the Premiership.

He guided them to third place and their first trophy in 19 years in his first full season, followed by four successive second-placed finishes in the league.

However, Aberdeen were beaten to third spot in 2018-19 by Steve Clarke's Kilmarnock and then by Motherwell in last year's shortened season. 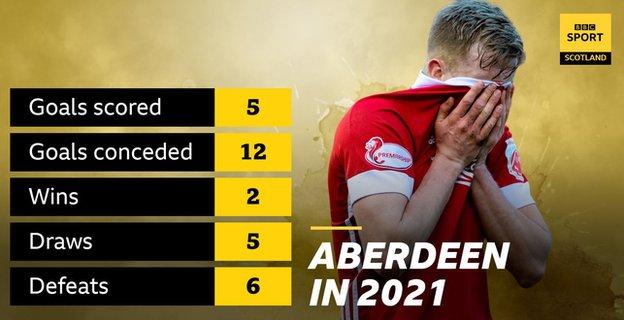 Though Aberdeen have had notable European wins over Groningen and Viking, they did not reach the Europa League group stage on McInnes' watch.

In 2017, Sunderland and Rangers made approaches for McInnes but he chose to stay put after negotiations with both clubs.

The draw with Hamilton is not just an isolated occasion. They're not taking chances, they're not creating enough either.

They did create against Hamilton - they had three good ones in the first half, but in the second half, not really. There was a lot of effort, commitment, but not enough composure or guile in both halves in front of goal.