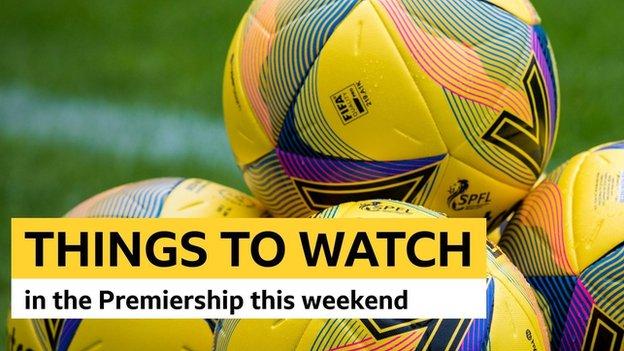 Not since David Hasselhoff proclaimed his love for Partick Thistle have we had such a dramatic week in Scottish football.

Well, maybe last week. Or the one before that. Or... well... you get the message.

A Hollywood scriptwriter would struggle to conjure up some of the storylines played on the slowly rutting parks or the ever-fretting boardrooms or departure lounges across Scotland.

This week, we've had more Celtic players on their sofa than on the park because of self-isolation, then there was chief executive Peter Lawwell's apology.

And that's before you get to Livingston's pitch being wetter than a long weekend in Wishaw, the lower leagues in Scotland being halted, and Kilmarnock and St Mirren's legal team getting their forfeit appeal pushed through. President Trump's representatives will soon be on the phone.

Surely the weekend can't live up to this? If we've been taught anything by this point, it'll certainly give it a good go...

To say Celtic have had better weeks is putting it mildly. So much so, they probably long for the halcyon days of getting scudded by Barcelona or Paris St-Germain in the Champions League for some light relief.

The 1-1 draw with Hibernian on Monday was a sobering sight for a group of supporters hardly drunk on success in 2021. With 13 players - as well as Neil Lennon - nowhere near Celtic Park, a makeshift XI laboured to a point. In truth, it easily could have been much worse for them.

The one bright moment of the game for Celtic, as has been the case several times of late, was David Turnbull. It was his wonder goal that gave the hosts a late lead, and the more he plays, the more you simply cannot fathom how it took Lennon so long to give him his chance.

If the Celtic manager was looking for an easier afternoon while watching on from a distance this weekend, he will be disappointed.

Livingston come to Glasgow on the back of eight straight wins and suitably rested following their postponement midweek against Aberdeen. While David Martindale's sorcery could not mop up the deluge in West Lothian on Wednesday, the magic shown from the former managerial apprentice has been staggering.

A win on Saturday could take them within four points of a European spot with two games in hand. It's an intriguing tussle.

It is already being billed as the goal of the season, and at 52.98 yards (if that's even a thing), it's difficult to argue.

Lawrence Shankland's long-range missile blasted Dundee United to a draw with St Johnstone on Tuesday night, but goals of any kind have been hard to come by for the Scotland striker.

That wonder effort was only his fourth in the campaign, but in truth the lack of service to him has hardly helped. Maybe that's why he's started shooting from the halfway line?

Regardless, on Saturday he faces a Hamilton team who have conceded the most goals - 47 - in the top flight. If Shankland is to build a case for a place in Steve Clarke's Scotland squad for the Euros, hitting a consistent return of goals could be pivotal.

John Hughes has steadied the Ross County ship since taking over from Stuart Kettlewell, but a home victory still eludes him. Could a win be on the cards when Aberdeen come calling on Saturday?

The history books would tell you, er, no. In the last five meetings in the Highlands between the pair, Aberdeen have won convincingly in all with an aggregate score of 13-4.

Aberdeen will be keen to recover from defeat by Rangers but there is added incentive for Derek McInnes' side. The Dons are third, two points above Hibs with two games in hand, but victory over County and a slip-up from Celtic could see them move within touching distance of last season's champions.

A lot of ifs and buts, yet perfectly possible given the current form of all involved.

On paper, you'd say this result is a given. One team struggling at the foot of the table without a win since October, the other a victory-laden machine, rampaging its way through the league.

Rangers have been formidable all season, brushing teams aside at will. Yet in the last meeting between these sides a month ago, Stephen Robinson's visitors held a shock lead at Ibrox, only to crumble late on.

Now under the guidance of Graham Alexander, there was a freshness about their play last week in a frustrating 1-1 draw with St Mirren.

Having said that, history is not on their side. You have to go all the way back to Boxing Day 2002 for the last time Motherwell beat Rangers in the league, a fresh-faced teenager called James McFadden nodding in the winner.

It was a shock back then, and make no mistake it would be another here. Can Motherwell halt the Gerrard juggernaut?