Images of players celebrating inside tightly packed dressing rooms were an unwelcome feature of FA Cup third-round weekend - while crowds of fans gathering outside cup ties drew criticism and caught the attention of government ministers.

On the back of players from all levels of the game apologising for various coronavirus rule breaches, the case for football to continue while the rest of society is locked down is coming under increasing scrutiny.

"Morally, with the situation we have in this country and worldwide, to keep doing what we are doing is a little bit of a strange feeling," Arsenal boss Mikel Arteta said on Monday. "We know what we can bring to society if we are able to do it in safe way."

In the Premier League, referees will speak to captains and managers before matches to remind them to observe social distancing guidelines, including around situations like goal celebrations and handshakes.

New EFL chief executive Trevor Birch wrote to all clubs on Monday, warning them "now is not the time for complacency" over Covid protocols, adding: "We will come under extreme governmental pressure if we continue to flout the rules and guidance in place.

"It is more important than ever that all club staff and players vigilantly follow the processes to avoid a suspension and the implications, particularly financial, associated with such a drastic course of action."

BBC sports editor Dan Roan says while elite sport is not yet in the "last-chance saloon", there are "no guarantees" with "patience wearing thin".

What is the background?

Over the weekend, the UK passed the milestone of 80,000 coronavirus-related deaths since the start of the pandemic and there is debate about whether England's lockdown restrictions should be tightened even further.

But some elite sport has been able to continue under strict protocols established in the summer.

With several shock results in this weekend's FA Cup, players were keen to celebrate, but videos from the dressing rooms with players not socially distancing has led to criticism on social media. 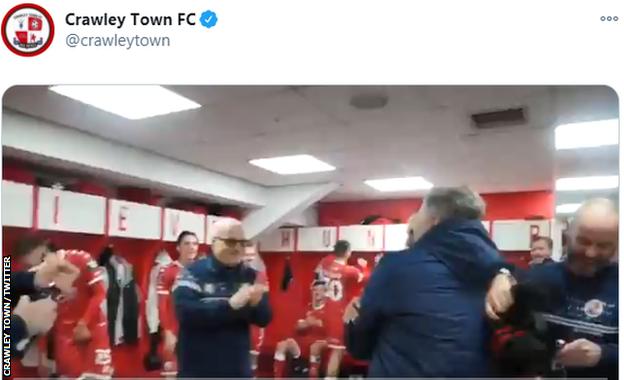 There were also images of fans gathered outside Marine's stadium in Crosby, Merseyside, before their match against Tottenham on Sunday.

Merseyside Police said the "vast majority of people present were adhering to social-distancing measures and those who were not were advised by officers".

More than 60 games in England have been called off this season, with Aston Villa's match against Tottenham on Wednesday the fifth Premier League postponement.

Players from Spurs, Fulham, Crystal Palace, West Ham and Manchester City were recently criticised by their clubs for breaking England's restrictions over the new year holiday.

In the Women's Super League, Arsenal's trip to Aston Villa and Manchester City's home game with West Ham were both postponed after five players tested positive for coronavirus following trips to Dubai over Christmas.

Manchester United boss Casey Stoney apologised for giving her players permission to travel to Dubai over the festive period.

After a relative surge in cases - 40 players and club staff tested positive in the first week in January - the Premier League introduced stronger protocols:

The Premier League previously tested players once a week but increased it to two rounds over the past week.

Players and staff at English Football League clubs will now be given coronavirus tests twice a week to help find asymptomatic cases earlier. There were 112 positive cases at the 66 EFL clubs in its most recent round of testing.

What has been the reaction?

The Football Association will be reminding everyone of their responsibilities.

It is understood there are no plans to halt elite sport but government ministers are concerned that the images from dressing rooms could make it harder to defend its continuation.

A Whitehall source confirmed to the BBC that the celebrations at Chorley and Crawley Town had been noted by ministers, who last week warned football's authorities they had to do all they could to justify elite sport carrying on.

In his letter written to clubs on Monday, seen by BBC Sport, EFL chief executive Birch also said: "Throughout the pandemic, football has provided a glimmer of hope for many millions of people affected by restrictions but we all understand the scrutiny the game remains under.

"While football is permitted to continue the actions of all participants will clearly be under the microscope.

"I am therefore personally asking you to re-double your efforts, to check, amend and tighten your protocol accordingly, and ensure that players and staff are left in no doubt as to their responsibilities on matchdays."

"The balancing act is trying to minimise the amount of contact outside very structured environments while trying to keep some semblance of life as will all know it," he said.

"It is very much a matter for individuals in their day-to-day life. We have all got to say what, in our own lives, can we do to minimise the amount of impact we have on the NHS and the vulnerable?"

Rochdale AFC doctor and GP Dr Wes Tensel told BBC Radio 5 Live on Tuesday: "Halting football at the moment would send out the right message to the public. It might make the severity of what's going on appear more apparent to some people."

'Not quite in last-chance saloon' - analysis

Elite sport is not quite in the last-chance saloon, but the exemption it has been granted, at a time when grassroots sport has had to stop, cannot be taken for granted.

A suspension is not yet imminent, but there are also no guarantees, especially if infection rates continue to rise, hospitals become overwhelmed, and the national lockdown has to be strengthened further. The government's patience seems to be wearing thin after the scenes of crowded dressing-room celebrations made a mockery of the social-distancing protocols that clubs were reminded of.

The optics of on-field hugs and handshakes, and fans gathering outside grounds, beamed into millions of homes at a time when the government is desperate for the public to stay at home and avoid contact with other households, is highly unhelpful to those making the case for professional sport to be allowed to continue.

My understanding is that ministers and medical experts' concerns do not amount to a final warning; they realise that the coverage of elite sport encourages people to stay at home and helps to retain some normality and balance in people's lives, and that protocols have largely been successful in suppressing transmission around training and fixtures.

But having warned sports bodies of their responsibilities last week, the government does now expect to see the football authorities in particular redouble their efforts, and for players' behaviour to reflect the privilege they enjoy in being able to continue to work when there has been so much disruption in so many people's work and lives.

Certainly, football can ill afford any more high-profile breaches of the guidelines by players when away from their clubs.

What have football managers said?

Arsenal manager Mikel Arteta said the rules around celebrations in particular could be "difficult to understand".

"To control emotions when you are playing at 200mph is very difficult," he said on Monday.

"We are asking our players at corners, for example, to be man-marking people, pushing people around and not fist-bump anyone."

Manchester City boss Pep Guardiola voiced similar concerns, saying: "When one guy scores a goal, I don't know if they can be controlled and not celebrate it.

"The joy to celebrate it, I don't know if [a player] is going to think: 'I cannot hug my mate for two, three seconds'."

"What I'm afraid of is the decision to stop - football as we know now will not be the same," he said.

"This is my biggest fear because the schedule will go crazy."

Sheffield United manager Chris Wilder said: "Everyone knows the situation and if it gets suspended I don't think it'd be a surprise.

"We'll just go with what the Government and Premier League have to say and, if it's the case to carry on, we'll carry on. But I don't think I'm being controversial if I say I don't think anyone would be surprised if we don't carry on with the way it's sweeping through the country."

Despite fans not being allowed to attend matches, football still allows for some sense of escapism - a point Arteta emphasised.

"We know what we can bring to society if we are able to do it in safe way," he said.

"There are a lot of positives to take but it is just that balance. When we are still safe, we can add something positive without this difficult context."