Leicester won away at Newcastle and Manchester City scored three against Chelsea to take all three points from Stamford Bridge.

Check out my team and then make your own selections towards the bottom of the article. 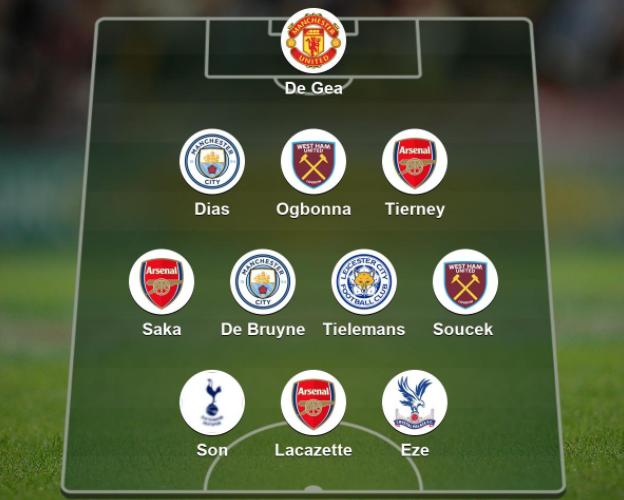 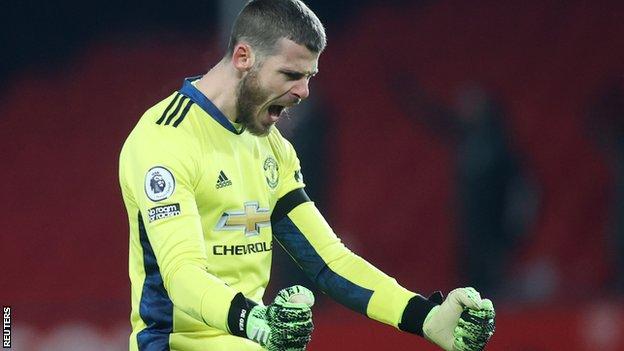 David de Gea: There were two pivotal moments in the remaining minutes of this game that signalled the importance placed on Manchester United winning the match. The block by Eric Bailly on Keinan Davis' shot that was almost certainly destined for the back of the United net and the save by De Gea from Matty Cash.

There were other excellent saves from De Gea earlier in the game from John McGinn and Ollie Watkins, but you expect a keeper of De Gea's class to keep them out. Villa were impressive and deserved a point from this game, but they were denied because of De Gea's big-match temperament.

De Gea is United's number one for a reason. He wins you matches.

Did you know? De Gea made four saves against Aston Villa - only against Wolves has he made more in a Premier League match this season (five). 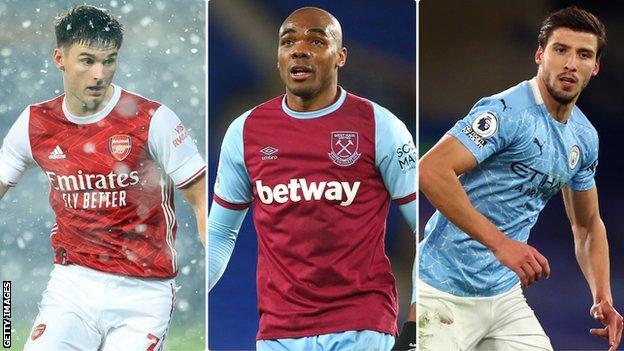 Kieran Tierney: When I saw Tierney tease West Brom's Darnell Furlong - not once, but twice - I thought he'd slightly overdone it, but what then took place was finishing of the highest order from the Arsenal full-back. For the left-footed Scot to cut inside and let fly so accurately with his weaker foot was very impressive.

Tierney has been one of the few shining lights in what has been a difficult season for Arsenal so far, but this victory over the Baggies is the Gunners' third consecutive win. I wonder if they have turned the corner.

Did you know? Tierney created the most chances (four) and had the most touches (95) for Arsenal against West Brom.

Angelo Ogbonna: This was another case of first-class defending by West Ham's Ogbonna. He never gave Everton striker Dominic Calvert-Lewin a kick - that said, the service the England international got from his Toffees' team-mates was practically non-existent.

The Hammers have had a gruelling schedule over the festive period, while Everton had a few more days to rest after their game with Manchester City was postponed because of the Covid-19 pandemic.

The enforced rest seemed to disrupt Everton's rhythm, with West Ham looking like a side with momentum - primed and ready for the battle. However, this turned out to be less of a battle for the Hammers and more of a smash and grab.

Did you know? Ogbonna made seven clearances against Everton, with only Crystal Palace's Cheikhou Kouyate (eight) making more across the whole matchday.

Ruben Dias: This was one of those performances when anyone could have played in Manchester City's back four and looked like a world beater - they were that good. Much has been made of the resurgence of John Stones but it was Dias and his authority in defence that I found impressive.

City are another team where the spread of coronavirus had forced them to make changes but the way they have adapted has been amazing.

Meanwhile, Chelsea boss Frank Lampard looks like a man, for the first time, who doesn't know his best team nor how to provide a different blend for different matches - which is worrying because he has the players.

Did you know? Dias made the most clearances (six), blocks (four) and interceptions (three) of any Manchester City player against Chelsea. 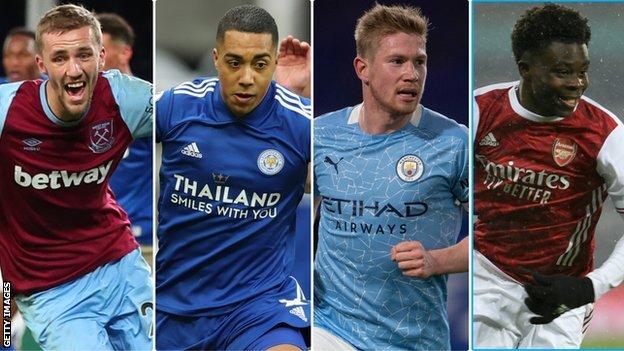 Tomas Soucek: West Ham's victory over Everton must have given their manager, David Moyes, an awful lot of satisfaction. He had, after all, been in charge of the Merseyside club for 11 years before his fateful stint at Manchester United.

Soucek's impressive, one-touch finish from a skewed shot by Aaron Cresswell was brilliantly steered past Jordan Pickford, clinching the points for the Hammers. Soucek's taste for goals was beautifully illustrated by the way he anticipated Cresswell's strike going wide of the goal. Now that's a natural-born finisher.

Did you know? As well as the winning goal, Soucek had most shots on target (two), recoveries (15) and successful passes (43) of any West Ham player against Everton.

Youri Tielemans: Marc Albrighton was impressive, and so was James Maddison, but it was Youri Tielemans' performance that signposted Leicester's determination to stay among the league leaders.

For much of this fixture, Newcastle looked like the game against Liverpool had taken a little too much out of them, but they still made the Foxes work for their victory.

The standout moment was Tielemans' goal. I don't fancy Leicester to lift the title one bit, but they are another team that will have a say in who does.

Did you know? Tielemans scored with his only shot on target and made the most passes in the opposition half against Newcastle (28).

Kevin de Bruyne: He was involved in City's first and second goals and scored their third in the best 45 minutes of football I've seen from Manchester City all season. Chelsea must have gone into their dressing room at half time punch-drunk.

City have struggled at times this season with De Bruyne incapable of providing the inspiration of previous years, but with the soccer wizard back to his best there was simply no stopping him tearing the Blues to pieces.

The win against Chelsea takes City to fifth, with two games in hand on the league leaders. I might not fancy Leicester for the title but I wouldn't bet against Manchester City - especially with De Bruyne in this mood.

Did you know? He was involved in eight of Manchester City's 18 shots against Chelsea (five shots, three chances created), more than any other player.

Bukayo Saka: Oh I do love this kid. The only problem with Saka's ball into the box during the game's opening exchanges was Alexandre Lacazette wasn't equal to it. But then we saw something that Arsenal manager Mikel Arteta must see on a daily basis on the training ground - a wonderfully crafted team goal which, on this occasion, made West Brom look like statues.

The issue is we are having to wait far too long for moments like this from Arsenal. Training sessions are fine but the whole point of them is to reproduce what you do during practice when it matters. This time it seemed to work and the Gunners blasted West Brom off the park.

Did you know? Saka has either scored (two) or assisted (one) a goal in each of Arsenal's past three games. 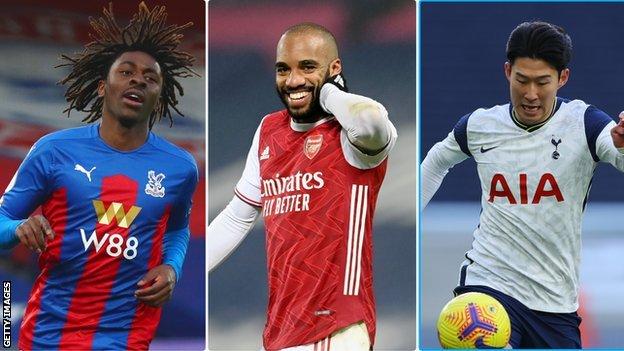 Eberechi Eze: Since this player's arrival from QPR his development has been unmistakable. Eze plays the game with a grace and style that is difficult to ignore. From the moment he replaced Jeffrey Schlupp it seemed as though Sheffield United defenders took a step back.

The individual nature of his goal was quite brilliant, but it was the ease at which he passed the ball into the back of the net that made me really sit up and take notice. It doesn't just indicate talent but also a self-assuredness you don't find in most players.

Palace boss Roy Hodgson would do well to look after this kid. He could be a bit special.

Did you know? Both of Eze's Premier League goals have been from outside the box, with only Southampton's James Ward-Prowse scoring more such goals this season.

Alexandre Lacazette: It shouldn't be difficult to play a player in his right position. However, it seems Arteta has struggled to get a grasp of the obvious at times. The Arsenal manager has mixed and matched players, and even tried to put square pegs in round holes on occasions.

Lacazette is a natural centre-forward and any other consideration is nonsense. It's not complicated. The striker's two goals suggest Arteta would do well to leave him where he is. His perpetual tamperings have cost him in the past.

Did you know? Lacazette is Arsenal's top scorer this season, including seven goals in the Premier League.

Son Heung-min (Tottenham): I see these two are at it again. Harry Kane and Son combined to make it a very miserable afternoon for Leeds at Tottenham Hotspur Stadium. In fact, they destroyed Leeds in a matter of minutes.

The ball from Kane to enable Son to convert Spurs' second goal was simply gorgeous and matched only by the finish.

Fair play to Leeds, they may be new to this league but they are not afraid to take risks, especially away from home. They are more than happy to mix it with the big boys. I don't think they own a bus - but, if they do, they may have to start parking it occasionally!

Did you know? Son scored his 100th goal for Tottenham on his 253rd appearance for the club.

When a player, or anyone for that matter, contracts Covid-19 they deserve our sympathy, not criticism. I have never come across a team that have not wanted to fulfil a match, unless they have been ravaged by injuries or, as is the case, have players suffering with coronavirus.

Fulham's cancellation of their midweek fixture against Tottenham, while inconvenient, must have been necessary otherwise the Premier League would never have approved it. It is difficult to fathom how anyone could be critical of anyone's efforts to keep people safe and not spread the virus knowing they had it - but Jose Mourinho was.

What made labelling the decision to postpone the event "unprofessional" even more ludicrous was that Covid-19 harbours a capacity to strike anyone at any time. That's why our hospitals are near breaking point.

In order for the national game to continue amid the coronavirus restrictions must take extraordinary planning. So to see an unforgiving Mourinho sarcastically mocking the Premier League on social media with the tag "best league in the world" after arriving at the ground at 2pm still not knowing if his fixture was going ahead grated with me.

However, Mourinho was left with egg on his face when three of his players breached Covid-19 restrictions by attending a Christmas party.

Mourinho's explanation on Match of the Day was lame. To even suggest he can't monitor his players 24/7 was pathetic - he shouldn't have to. By breaking the rules, his players put people's health and safety at risk. Well, we all make mistakes but I think the term "unprofessional" should not be directed at Fulham or the Premier League, but at Mourinho and his three players.