Carlo Ancelotti believes Manchester City are hurtling towards a third Premier League title in four seasons after his Everton side were beaten by the Premier League leaders.

The Everton boss said it was "almost impossible" to compete against Pep Guardiola's side, who extended their lead at the top to 10 points with 14 matches remaining.

"I think so, it is really difficult to say another name," said the Italian when asked if Everton had lost to the team that will become champions.

"It was hard, almost impossible. At the moment they are the best team, they have quality, power, belief.

"It is very difficult to compete with them."

Phil Foden fired City on their way to a 17th successive win in all competitions with a right-footed shot which hit Everton substitute Seamus Coleman on its way past Jordan Pickford.

Hard-working Everton were back on level terms five minutes later, Lucas Digne's powerful attempt coming back off the post and hitting Richarlison before flying over the line.

However, a wonderful curling finish from 18 yards by Riyad Mahrez restored City's lead before Bernardo Silva beat Pickford from a similar distance in the closing stages.

By beating Everton they also become the first team in English top-flight history to win their opening 10 matches in a calendar year.

This was Manchester City's game in hand after the original fixture, due to be played on 28 December 2020, was postponed after Guardiola's side reported a number of coronavirus cases.

At the time, City were sixth in the table - six points behind then-leaders Liverpool - but their lead is now into double figures after a 12th successive league win.

Not that Guardiola's players are getting carried away.

"I have not seen that the team is thinking of the table, we have spoken about that," said the City boss.

"There are 42 points still to fight for, we are in the middle of February. Now we rest for a few days, there are so many games."

City have not trailed for a single minute in any of the last 16 Premier League matches and did not panic after Everton became the first team to score against them from open play since 3 January.

This latest impressive performance was achieved without Ilkay Gundogan, who has enjoyed a rich run of goalscoring form but was nursing a groin injury.

It looked business as usual when Foden broke the deadlock with aid of a deflection off Coleman, an early replacement after Yerry Mina suffered an injury.

Richarlison's equaliser only served to antagonise City, who stepped up another gear after the interval to take the game out of Everton's reach.

Mahrez's strike was the pick of the goals while Silva's exquisite finish sealed another highly-satisfactory night for Guardiola's relentless side, who ended the game with Kevin de Bruyne on the pitch for the first time since 20 January after injury.

No reward for battling Toffees

Everton produced a battling performance and, at one stage, threatened to become the first team since West Brom on 15 December to stop Guardiola's side from winning.

But like so many before them, the Toffees were undone by City's exceptional quality and now prepare for Saturday's derby at Liverpool, where they have not won since 1999, on the back of two successive league defeats.

Pickford, on his return to the side after injury, had looked set to frustrate the leaders.

Having dived full-stretch to deny Joao Cancelo when the game was goalless, the England keeper did well to block out Silva at 1-1 before City took the game away from the hosts.

Everton have made progress under Ancelotti but the Italian will be frustrated by his side's stuttering run of form.

They are missing their injured forward Dominic Calvert-Lewin and it is now one win in six in the league which threatens their chances of a first top-four finish since 2004-05.

'It'll be different against Liverpool' - what they said

Everton boss Carlo Ancelotti: "Manchester City are the best team and we are not at the same level.

"It will be a different game against Liverpool. We are on a good run away and we believe more. Liverpool are a fantastic team but in football you never know." 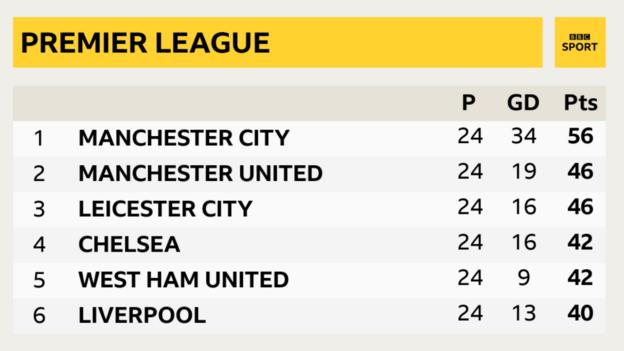 Manchester City boss Pep Guardiola: "Everton are well-organised, but we had the patience to attack them. It was well deserved.

"It was a real tough game, the pitch was not in a perfect condition in winter and they are such a physical team. It was a solid performance."

Everton are away to Liverpool in the Merseyside derby on Saturday (17:30 GMT), while Manchester City have an extra day to prepare for their away match at Arsenal on Sunday (16:30).