It began in August 2016 with Scott Sinclair's winner at Tynecastle and ended more than four years later, against the same opposition, with Kristoffer Ajer lashing past Craig Gordon from 12 yards.

Celtic's unprecedented haul of a dozen domestic trophies in succession, bookended by victories over Hearts, may never be matched again.

Neil Lennon's side clinched the 2019-20 Scottish Cup with a gripping penalty shootout triumph on Sunday, sealing a historic quadruple treble.

From Cliftonhill to Firhill, and Toure to Turnbull, these are the numbers behind the men who made history.

Brendan Rodgers lifted the first silverware of his reign in November 2016 as Celtic brushed aside Aberdeen at Hampden.

Tom Rogic, James Forrest and Moussa Dembele powered the Glasgow side to a 3-0 triumph.

They had already seen off Motherwell, Alloa Athletic and Rangers, winning the trophy without conceding a single goal.

Rodgers' 'invincibles' will forever be enshrined in Celtic folklore as the team who went 47 domestic matches without defeat this term - the first team to do so in the Scottish top flight since the late 19th century. 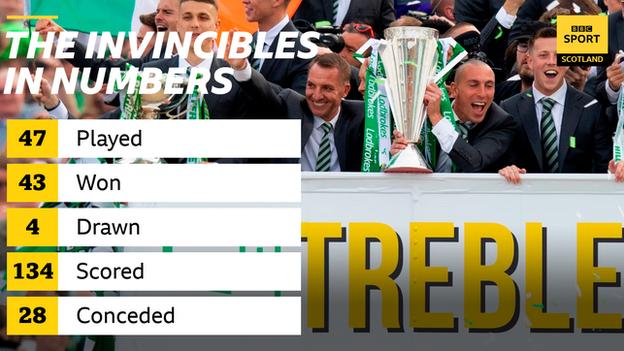 They notched a record 106 points, racking up the same number of goals, and winning the title by 30 points and with eight games to spare.

The treble - and the invincible season - was sealed in May 2017 as Rogic swaggered into the Aberdeen box and clipped home a late winner in the Scottish Cup final.

Jonny Hayes, who would later join Celtic, fired Aberdeen ahead early on, but the lead was swiftly extinguished by Stuart Armstrong before Rogic pounced.

Once more, Rangers were subdued in the semi-finals, with Albion Rovers, Inverness and St Mirren all seen off.

A four-game defence of the League Cup was completed in emphatic fashion, with Celtic scoring a combined 15 goals against Kilmarnock, Dundee, Hibernian and Motherwell.

The Fir Park side were beaten 2-0 at Hampden, with Forrest and Dembele - again, from the spot - striking as they did a year earlier.

The 'invincible' run stretched deep into the new season. But, with the League Cup secured, the merest fractures began to show in Premiership performances.

Hibs twice came close to ending the unbeaten stretch. Kilmarnock and St Johnstone both held Celtic to draws too. And, in December, the streak was shattered in sensational style, Hearts destroying Rodgers' troops 4-0 in Gorgie.

The hammering brought Celtic's incredible record to a halt at 69 games, but it would not stop them marching to another title.

Rangers, yet again, were vanquished in a Hampden semi-final as Celtic thundered to the double treble.

Their rivals were shellacked 4-0 after Brechin City, Partick Thistle and Greenock Morton had been defeated and, once more, Motherwell were handed a 2-0 loss in the final. Callum McGregor and Olivier Ntcham quickly took the wind out of Lanarkshire sails.

In five games en route to the cup, Celtic scored 17 goals and conceded only two.

This would be Rodgers' seventh and final trophy as Celtic manager.

His team cantered to yet another piece of silver in November 2018, with Ryan Christie scoring the only goal of the final against Aberdeen.

It was in this tournament where Christie came of age as a Celtic player. Having struggled for opportunities, he seized his chance in the Murrayfield semi-final against Hearts, scoring a cracker and delivering a virtuoso performance in the 3-0 win. Christie has not looked back since.

Celtic's title defence erupted into chaos when Rodgers left for Leicester City in February with three months of the season remaining.

There was huge rancour and fury among fans at both the timing and manner of his exit, with Celtic bidding for the treble treble.

Peter Lawwell sent for Lennon, who had recently left his post as Hibs head coach. The former captain and manager stepped up and oversaw a thrilling Tynecastle victory days after taking interim charge.

Premiership displays thereafter were not always convincing, nor did they deliver the most scintillating football, but Lennon steered Celtic comfortably over the line.

Lennon's second game after taking charge featured a raucous quarter-final trip to Easter Road and a Hibs side swaggering under new boss Paul Heckingbottom. Lennon and Celtic cruised to a 2-0 win.

Aberdeen were dispatched 3-0 in the semi-final, setting up a showdown against Hearts with the treble treble at stake.

Craig Levein's men gave Celtic palpitations when Ryan Edwards put them behind, but Odsonne Edouard netted a penalty then pounced on Christophe Berra's mistake to bag the winner.

Lennon was offered the job on a permanent basis in the showers after the game.

The pressure was on Celtic and Lennon to justify the call and the League Cup began and ended in fraught circumstances.

Dunfermline Athletic took the champions to extra time in the last 16 before Partick Thistle and Hibs were savaged in the following rounds. 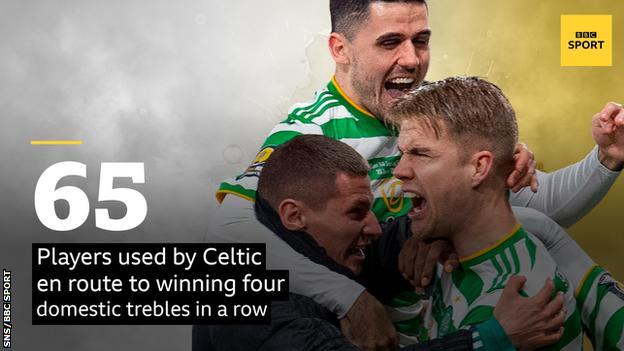 That teed up a mouth-watering clash with Rangers, beginning to motor under Steven Gerrard, under the Hampden floodlights.

Rangers bossed the contest for long spells. Alfredo Morelos spurned chance after glorious chance, then had his penalty saved by Fraser Forster.

Christopher Jullien leapt to net the only goal of the showpiece. Morelos has still to score in an Old Firm derby.

The most bizarre Scottish season in post-war history ended with Celtic champions again.

Covid-19 brought the league to a halt with Celtic 13 points clear of Rangers having played 30 league matches to their rivals' 29.

Debate and malcontent raged, but ultimately, the season was called, the standings decided on a points-per-game basis and Celtic crowned winners yet again.

The pervasions of the pandemic meant the cup was suspended at the semi-final stage, with Celtic due to play Aberdeen at Hampden having already dealt with the challenges of Thistle, Clyde and St Johnstone, conceding a solitary goal in the process.

The tournament resumed on 31 October. A day after Hearts sunk Hibs, Celtic eased past Aberdeen, continuing their crushing supremacy over Derek McInnes' men at the national stadium.

That brought us to Sunday's oscillating showpiece, a 2-0 Celtic lead at half-time, a 3-2 advantage in extra time and ultimately, eventually, victory in the shootout.