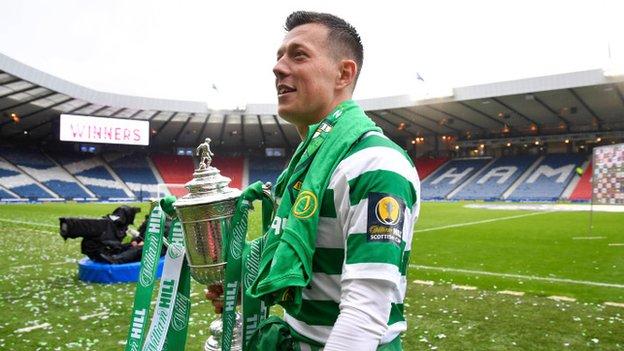 Celtic are aiming for a 12th consecutive trophy when they face Hearts at Hampden as last season's coronavirus-hit competition concludes.

"It's obviously something that's never been done before," McGregor said.

"To do it over such a long period is an incredible achievement. We're hungry to try to finish it off on Sunday."

Neil Lennon's side have won their last two games - against Lille and Kilmarnock - to arrest a slump in form during which they exited the Europa League, this season's League Cup and fell 13 points behind Premiership leaders Rangers, albeit with two games in hand.

And McGregor says the squad are determined to secure the Scottish Cup for their under-fire manager.

"We're here to do the best for Celtic and it would be brilliant for the players to deliver that [the Scottish Cup and quadruple treble] for the manager," he said.

"He [Lennon] has obviously had a tough time of it recently, as have some of the players. We're all in this together. It'd be a nice way to come out of the back of a sticky run if we manage to win."

McGregor said potentially winning 12 out of 12 trophies is testament to the players' work ethic and the standards demanded at the club.

"It's a massive opportunity to go and make history," he added. "When you're a young kid aspiring to be a footballer, these are the situations you want to be in. It takes an incredible amount of dedication, hard work and performance levels to get to where we are at this point."

McGregor is relishing the chance to face former Celtic team-mate Craig Gordon, who will be in goal for Hearts at Hampden.

"They have so much experience with guys like Craig Gordon in the side, a team-mate of mine for a number of years," the midfielder said.

"I've got huge respect for him and he's a really top goalkeeper. I'm sure we'll want to beat them as much as he wants to beat us. Come Sunday, we'll be on different sides."