"I'd rather play without it." "Ruining the game." "I don't know the rules any more."

The video assistant referee (VAR) was brought in to improve football. But Liverpool captain Jordan Henderson, Aston Villa midfielder Jack Grealish and Manchester City's Kevin de Bruyne have all spoken out about controversial decisions made by VAR recently.

And it seems football fans are also less than convinced by VAR in its second full season in use in English football.

In a poll for BBC Sport, only a third of football fans across the UK said they believe VAR has made football better.

The poll of 2,100 fans, carried out by Savanta ComRes, shows that while 30% of fans think it has improved the game, 44% of fans actually think it has made football worse.

While most fans are now given the option of seeing VAR decisions on screen - whether in the stadium or watching on TV - almost half of fans said they believe the introduction of VAR has made football less exciting.

Liverpool worse off with VAR?

Liverpool fans may agree with their captain when you look at the stats. Jurgen Klopp's side have had more goals disallowed by VAR than any other Premier League team in the 2020-21 season so far.

The poll shows just 28% of Liverpool fans believe VAR is being applied consistently, as do 31% of Manchester United fans, compared to 39% of Arsenal and Chelsea fans.

And just a quarter of Liverpool fans feel VAR has made football more exciting. 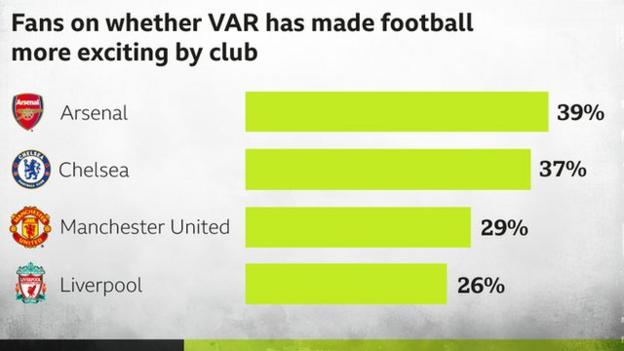 The FA Cup third-round tie between Brighton and Crystal Palace on 8 January 2018 was the first domestic game to use VAR, and it was subsequently used in one Carabao Cup semi-final and the Carabao Cup final between Arsenal and Manchester City.

The Premier League introduced the technology for the 2019-20 season.

In July of this year, Fifa took full control of VAR from the sport's lawmakers, the International Football Association Board (Ifab).

Since then, there has been an increase in referees using pitch-side monitors for goals, red cards and penalty decisions. VAR continues to rule on factual decisions and advise on matters of subjectivity.

Scottish football authorities have discussed introducing VAR, but the technology has not yet been used in professional league football there.

VAR was introduced in the German Bundesliga and Italy's Serie A in 2017 and Spain's top flight La Liga and the French Ligue 1 in 2018.

As with those European leagues, changes have been made in England to try to adapt and improve the system.

But the poll showed more than half (51%) of Premier League fans feel VAR is applied inconsistently.

However, Premier League chief executive Richard Masters said earlier this year that VAR was delivering on the "principal reason" for its introduction in improving the accuracy of decision-making.

"In key match incidents we are up to 94% accuracy with officials, 97% with their assistants, so we are seeing an impact on results and a positive impact on the league table," he said. 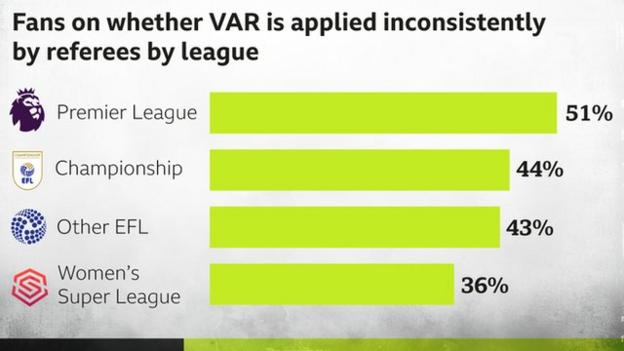 What they say about VAR

Former Manchester United defender and Sky Sports pundit Gary Neville: "[Referees] look like they have been programmed like robots. They are briefed like mad, they are programmed to the nth degree, they are frightened to death."

Tottenham manager Jose Mourinho: "We're going in a direction that's really bad for the beautiful game, the game that everybody fell in love with."

Former Tottenham and Newcastle midfielder and Match of the Day pundit Jermaine Jenas: "The players and managers have been unbelievable in mentally getting over these hurdles that VAR has thrown at them. It's supposed to help the game, and it's making it far worse."

Savanta ComRes interviewed 5,476 UK adults aged 18+ online between 20 and 24 November 2020, 2,100 of whom qualified as football fans for the purpose of our survey according to Savanta-gathered data on football fans and their demographic profile. Data were weighted to be demographically representative of UK adults 18+ by age, gender, region and social grade. Savanta ComRes is a member of the British Polling Council and abides by its rules. The full poll is published here