Sunday's 2-0 Scottish League Cup defeat at home to Ross County would have been adjudged the tipping point over Neil Lennon's 21-month spell as Celtic manager but for the violent actions of protesting fans outside the stadium in the aftermath and the club hierarchy continued discussions across Monday as to how best to address the on-field crisis. (The Scotsman)

Broadcaster Jim White says a senior Celtic source told him that violent protests outside the club's stadium on Sunday had hardened major shareholder Dermot Desmond's resolve to give Neil Lennon more time as manager as the Irish businessman would not "bow to yobs". (Glasgow Evening Times)

Major shareholder Dermot Desmond was so disgusted by the behaviour of fans calling for Neil Lennon's sacking on Sunday that he will offer the manager a last chance to turn the club's season around, starting on Thursday night in the Europa League group stage against AC Milan. (Daily Record)

While there are concerns about Celtic's dip in form and results, manager Neil Lennon still has the support of key men on the club's board and the lack of obvious candidates to replace the Northern Irishman, should he be sacked, is also a major consideration. (Scottish Sun)

Rangers are projected to lose £10m from the Europa League being played behind closed doors because of Covid-19, having made more than £20m last season. (The Scotsman)

Rangers striker Jermain Defoe has revealed that Sky Sports bosses were upset upset when he signed his Ibrox contract extension because they were keen to use the 39-year-old former England international as a pundit on a more regular basis. (Daily Record) 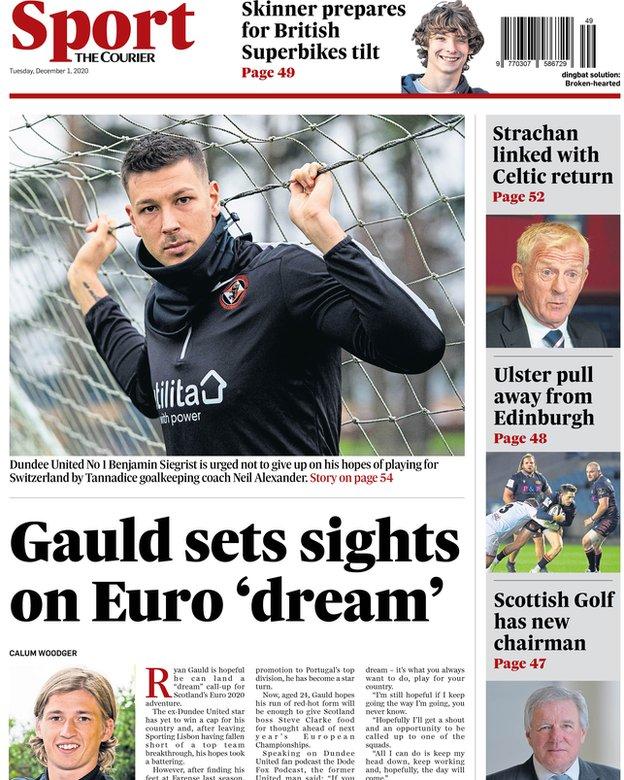 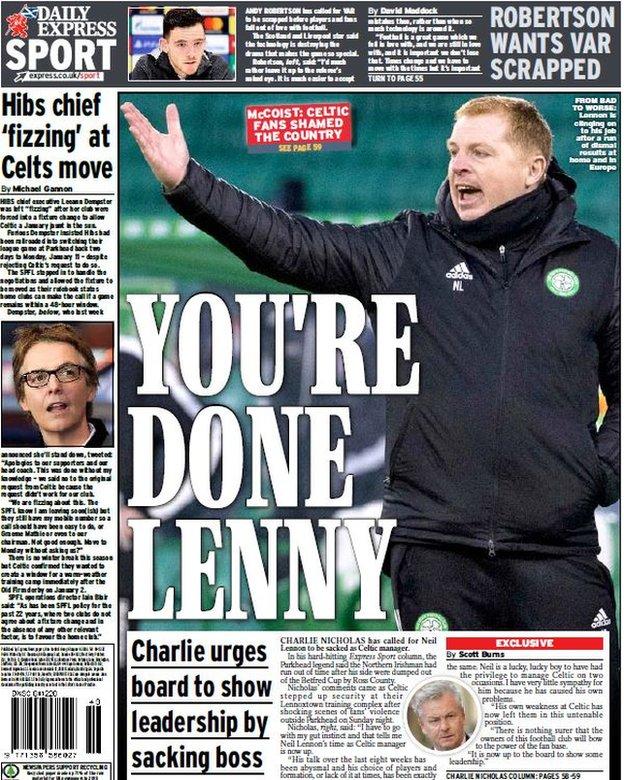 Rangers winger Ryan Kent's decision to change agents in the summer could lead to the 24-year-old - who was linked to Leeds United last summer - moving on from Ibrox, according to former Ibrox manager Alex McLeish. (Glasgow Evening Times)

Rangers have been installed as heavy favourites for the Scottish Premiership title, their odds being slashed from 4/9 favourites to 2/9 in the last three weeks, while holders Celtic have moved from 17/10 second favourites to 11/4. (Scottish Sun)

Aberdeen defender Ash Taylor says he is focusing on bringing success to the club rather than his future despite the 30-year-old being out of contract next summer. (Press & Journal)

Liverpool and Scotland left-back Andrew Robertson wants VAR scrapped as he believes the use of video replays to aid decisions is causing fans to fall out of love with football. (The Guardian)

Dundee manager James McPake thinks Scotland head coach Steve Clarke should consider a call-up for England-born Steven Caulker, the 28-year-old former Dens Park central defender currently playing in the Turkish top flight with Alanyaspor and who has said he would be interested in playing for the national team. (The Courier)

Former Rangers goalkeeper Cammy Bell told League Two leaders Queen's Park on Monday he wants to retire with immediate effect, with the 34-year-old having failed to make a first-team appearance since signing in February because of injury and the form of Willie Muir. (Scottish Sun) 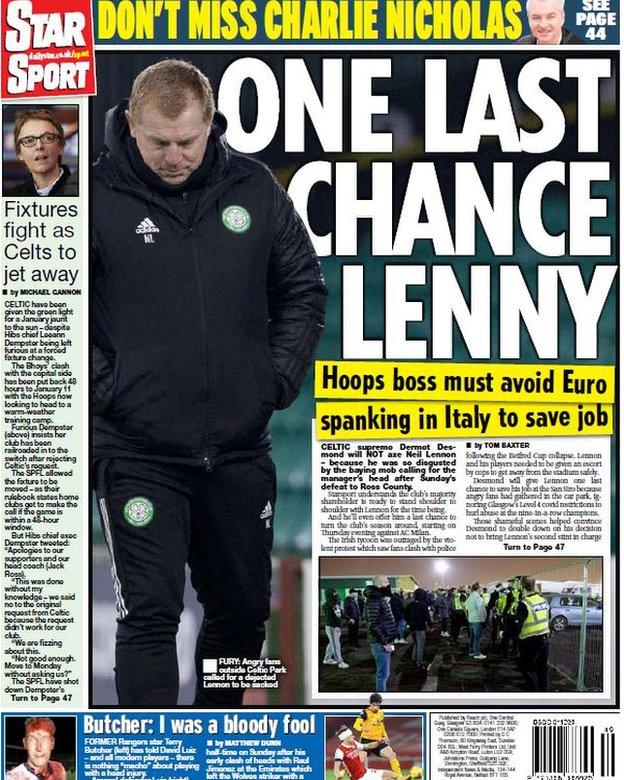 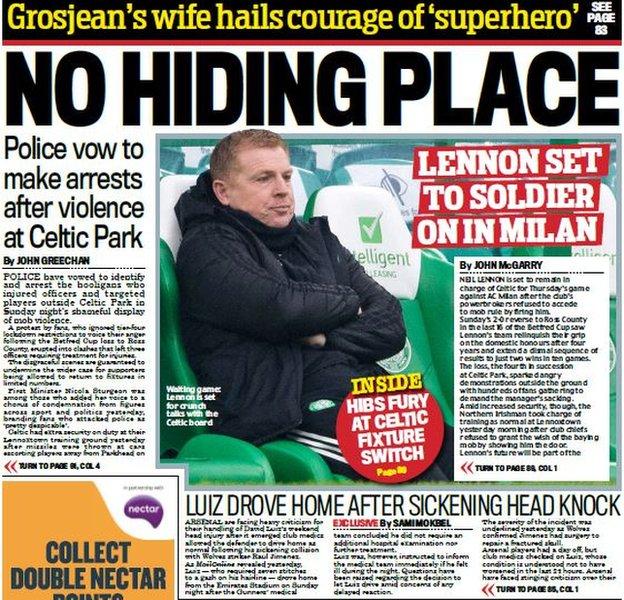 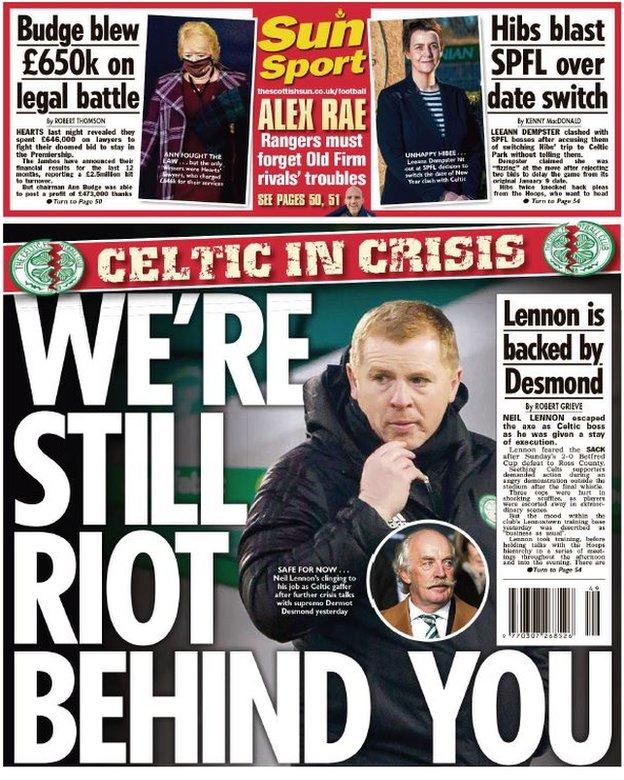