Qualifying for the Women's Euro 2022 tournament has reached a crucial stage this week with Northern Ireland, Scotland and Wales all still in with a chance of reaching next year's finals.

The 16-team competition, initially set for 2021 but moved because of the coronavirus pandemic, is being held in England and starts on 6 July.

Hosts England qualify automatically, and they have already been joined by six other teams, leaving nine more spots up for grabs.

France's 3-0 win over Austria on Friday saw them become the latest side to seal their spot in the competition.

How does qualifying work?

Group winners automatically qualify, as do the three best runners-up (runners-up in six-team groups will not have results against the sixth-placed team counted towards their total).

The remaining six runners-up will enter a play-off match in April, with the three winning teams taking the final three places.

What do Wales and Northern Ireland need? 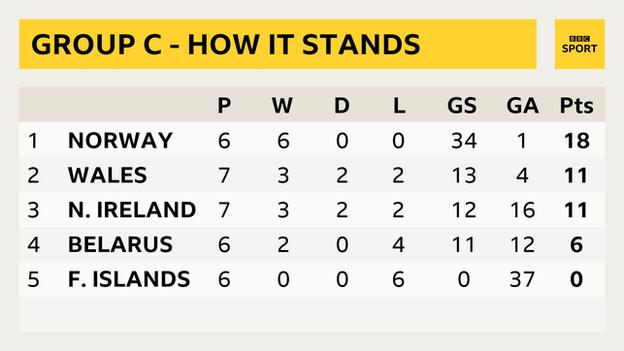 Only one of Wales or Northern Ireland can qualify, with both teams battling for second place in Group C.

Norway, quarter-finalists at the 2019 World Cup, have already won the group by winning all six of their matches so far.

Wales are level on 11 points with Northern Ireland but Kenny Shiels' side will be in a play-off if they win at home to the Faroe Islands on Tuesday after they recorded a crucial 3-2 win over Belarus on Friday.

Northern Ireland's women's team - who beat the Faroe Islands 6-0 in the reverse fixture - has never previously taken part in a major championships or been in a play-off to reach one.

Wales need to beat Belarus on Tuesday and hope Northern Ireland drop points against the Faroe Islands, who are bottom of Group C with no wins from six matches, no goals scored and 37 conceded.

Should both teams finish on the same number of points, Northern Ireland will finish higher by virtue of scoring two away goals in their 2-2 draw with Wales in Newport last year.

What do Scotland need? 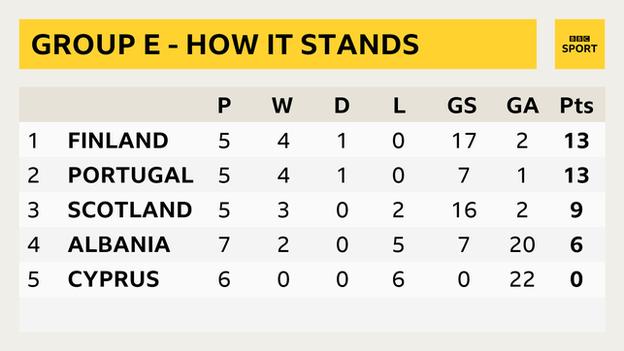 The postponement of matches, because of the pandemic, has played havoc with the landscape of Group E.

Scotland, in third, still have three more matches to play. There are just four points separating the top three but the Scots' narrow 1-0 defeat by Portugal in Lisbon on Friday dealt a major blow. They take on top side Finland on Tuesday and defeat could end their hopes of qualifying.

Lose and Scotland's only hope would be that Portugal don't win at home to Albania. They will know the result of that game before they kick off against Finland.

A draw with Finland would also leave Scotland in serious trouble.

Portugal are expected to beat Albania, meaning Scotland would be six points behind them and four behind Finland. Kerr's side could no longer win the group and finishing as one of the best runners-up is likely to be impossible too depending on how other results go, leaving a play-off as their only route to the finals.

With Finland highly likely to win away to Cyprus, who have lost every game in the group to date, Scotland would instead be left praying for a Finland win over Portugal to set up a final-day showdown with Portugal. A 1-0 or a two-goal win would then at least secure second place and a play-off spot.

Even a win at against Finland does not put qualification back in Scotland's own hands. Finland would still lead Scotland by a point and, providing they win both of their remaining games (away to Cyprus and home to Portugal), Signeul's side will win the group.

Likewise, if Portugal beat Albania and win in Finland when the sides meet in February, Scotland could not catch them either, even if they win their final group game at home to the Portuguese.

So Scotland need to win all three remaining games and hope Finland and Portugal draw when they meet. The two sides drew 1-1 in Lisbon earlier in the group, with Finland scoring a last-minute equaliser.

The Scots, who were without head coach Shelley Kerr this week after she was forced to self-isolate, are hoping to reach back-to-back Euros, following up their maiden World Cup appearance last year.

Fixtures left to be played:

Anything else to look out for?

Elsewhere there seems little prospect of any shocks.

Of the teams from Europe's top 10 ranked sides still to qualify - Spain, Italy and Belgium - only Spain are yet to guarantee a top-two spot, but a win against Poland on 1 December would secure their qualification.

The Republic of Ireland face the daunting task of having to beat eight-time Euros winners Germany in Dublin on Tuesday to guarantee finishing second - or hope Ukraine fail to beat Montenegro, who have picked up no points from seven matches so far.