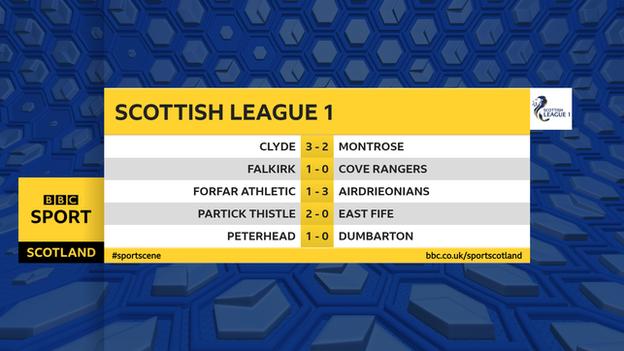 Falkirk ended Cove Rangers' 100% start to their debut season in Scottish League One with a 1-0 home win to narrow the gap at the top to a point.

Airdrieonians are now three points behind Cove after a 3-1 win away to bottom side Forfar Athletic.

Partick Thistle also move above Dumbarton and Montrose after a 2-0 win over East Fife at Firhill.

That's after Dumbarton lost 1-0 in Peterhead, while Clyde edged a five-goal thriller with visitors Montrose.

Former Hearts winger Callumn Morrison was the man to end Cove's nine-game winning run on league business stretching back to February, sliding in to finish an Anton Dowds cross three minutes after the break.

All four goals were scored within the first 27 minutes at Forfar's Station Park, where the hosts were left as the only side in the division without a win.

Thomas Robert, the son of former France international Laurent, scored one and set up another for the visitors, getting the ball rolling with a back-post finish for his second goal in as many games.

A Dale Carrick penalty extended the lead before Forfar midfielder Chris Antoniazzi followed up a Florent Hoti strike off the bar and Robert set up Kyle Connell for a strike from the edge of the penalty box.

Former Ross County and Hibernian striker Brian Graham grabbed a double, the first early in the first half and the second late in the second, to secure Thistle's win over the Fifers.

His early individual opener was cancelled out by Russell McLean's driven reply before Goodwillie restored the lead with a header. Chris Mochrie levelled again for Montrose from range before Goodwillie curled in the winner. 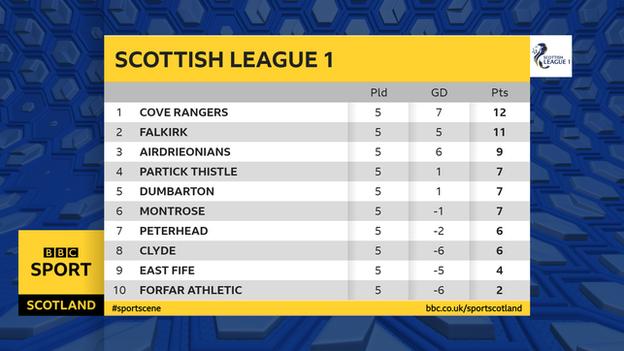