Hibernian and Dundee - who meet at Easter Road on Sunday - as well as Arbroath, Alloa Athletic and Falkirk will also progress.

Aberdeen, holders Celtic, Motherwell and Rangers enter in the second round.

They will be seeded, as will Hearts, who had already qualified.

In Group E, Two Stevie May penalties and a Chris Kane strike denied Peterhead a last-16 place as St Johnstone won 3-1 at Balmoor, with Shaun Rooney netting an own goal.

The result means Dundee United finish second in the section, but narrowly missed out on progression.

Falkirk progress as one of the four best second-placed sides, and Kilmarnock bowed out with a 2-0 home win against Dumbarton, Eamonn Brophy and Mitchell Pinnock on target in the first half.

In Group D, Oli Shaw got Ross County's opener against Stirling Albion and Ross Stewart converted a second-half penalty before Regan Charles-Cook rounded off their win in front of 300 fans.

They could be seeded in the next round, depending on the outcome of Hibs v Dundee.

Partick Thistle and Greenock Morton drew 0-0 in the other group game, Thistle winning the penalty shootout 4-2 to secure the additional point.

In Group H, Livingston recovered from Thomas Robert's opener for Airdrie to win 4-1, Alan Forrest and Jay-Emmanuel Thomas scoring twice with the latter's first from the spot.

Alloa are runners-up after Liam Buchanan's hat-trick helped them to a 4-2 win over Stenhousemuir, having been two down. Steven Hetherington got the final goal.

In Group F, Ayr United beat Stranraer 6-5 on penalties to win the section after a 1-1 draw. Darryl Duffy's early opener for Stranraer was cancelled out by Luke McCowan in the second half.

In Group A, Manny Duku scored the only goal for Raith Rovers at Cowdenbeath as they finished runners up behind Hearts, but it wasn't enough to see them through. 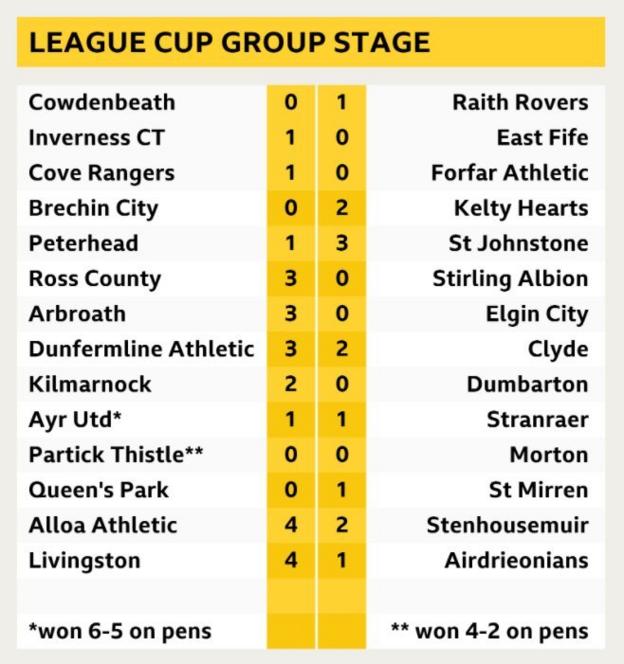