It was a night of twists, turns, trauma and triumph.

Scotland fans were put through the emotional wringer like never before as their team qualified for Euro 2020, the first major tournament for the men's team since 1998.

The play-off final against Serbia will go down in Scottish sporting history, thankfully for all the right reasons. Here's how the unrelenting drama unfolded on social media.

They say it's the hope that kills you. And Scotland supporters are well aware it has been the misplaced hope that has been most painful in the past. But that doesn't stop the dreaming...

Wait a wee minute here. Serbia are the team with all the world-renowned stars, they're the team meant to be dominating. Yet it's Scotland bossing things, with Ryan Christie belting in a cracking opener early in the second half. This is surely too good to be true...

Yep, it was too good to be true. Serbia, after being awful for much of the game, have roused themselves. After a few near misses, with the clock ticking into the 90th minute, Scotland deploy a risky 'why-mark-him' policy in the box and Luka Jovic heads the equaliser.

Out of a tight spot

Right, having survived a pretty torrid extra time it's on to penalties. It's now or never. After nine successful penalties, Serbia's Aleksandar Mitrovic steps up - and David Marshall does the rest. Ya beauty! 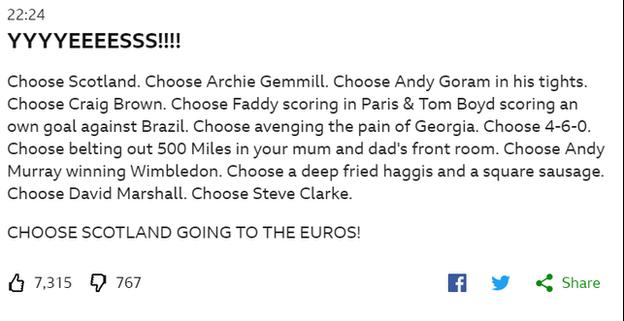 Tears of a hero

I'm not crying, you're crying. Ah stuff it, we're all greetin'! We are all Ryan Christie. What a guy. Roll on the Euros!