Diogo Jota has scored in his past three Liverpool appearances, with manager Jurgen Klopp saying the Portugal forward is even better than he expected - so should he replace Roberto Firmino in the team?

Jota came on for Firmino with 20 minutes to go against West Ham United on Saturday. He struck the winner in a 2-1 victory, becoming the first Liverpool player to score in his first three home Premier League appearances since Luis Garcia in 2004.

Just weeks after signing from Wolverhampton Wanderers in a £41m deal, that could rise to £45m, Jota is inspiring talk among Liverpool fans about whether he could move ahead of Brazilian Firmino in the pecking order.

"We fought really hard to sign him," Klopp said after the win over West Ham.

"He's an exceptional talent. He has the speed, physicality, technique, he's both-footed. He's much better than I thought he would be and that's really impressive."

Since 2017, the first-choice Liverpool front line has been, without any doubt, Firmino, Sadio Mane and Mohamed Salah.

But former England striker Alan Shearer said on Match of the Day that Jota has been a "wonderful signing" and ex-Liverpool midfielder Danny Murphy believes the Reds' front trio are under pressure for the first time.

Is it time for that to change as Liverpool visit Atalanta in the Champions League on Tuesday?

How have Jota and Firmino performed so far?

Jota has been significantly outscoring Firmino this season, despite playing far less football.

Firmino brings more to the team than goals - he is famed for his hard work - but his goal tally has been getting lower for each of the past three seasons, and he has only scored once in 10 games this season.

Jota, on the other hand, has scored four goals in nine games for Liverpool this season. In the Premier League, it is three goals in five appearances, a rate of one every 72 minutes.

Firmino has played 565 Premier League minutes to Jota's 215, although Jota has perhaps benefited from coming off the bench against tired defences.

Jota's goals have been important too, with his last two league goals being winners in 2-1 victories over Sheffield United (Firmino scored their equaliser) and West Ham.

His strike in their previous Champions League game against Midtjylland set Liverpool up for victory before Salah's 90th-minute penalty made it 2-0.

And an 88th-minute goal on his Premier League debut sealed a 3-1 win over Arsenal.

He had the ball in the back of the net twice on Saturday against the Hammers, but the first was ruled out by the video assistant referee for a Mane foul.

Statisticians Opta track how many goals a player would be expected to score from the chances he has. Firmino's 'xG' rating in the Premier League has been 1.85 to Jota's 1.31.

That means Jota, with four goals this season, has scored three times more goals than expected from the chances presented to him, while Firmino's one sole effort is on par considering the quality of his chances.

The pair have the same shooting accuracy (excluding blocks) - 66% - and the same passing accuracy - 81% - in the league.

But Jota led the way in most other comparisons when you factor in the number of minutes they've played - including several defensive measures.

How have they compared over the years?

Firmino's stats are more favourable than Jota's when factoring in the previous two seasons.

Jota played for Wolves in the Premier League in 2018-19 and 2019-20 (having played in the Championship for them the season before) before his move to Anfield this summer.

Firmino has had more appearances, goals, assists, chances created, shots and successful passes in that time - while Jota has completed more dribbles.

Firmino has won a Champions League and Premier League winners' medal in that time too. 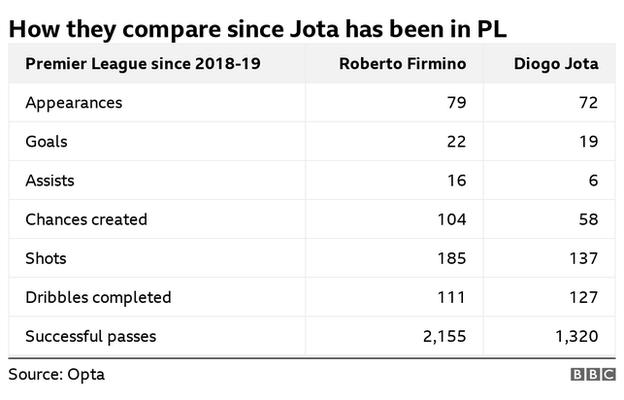 Former Liverpool midfielder Murphy said on BBC Match of the Day: "Jota is giving Jurgen Klopp a problem. That wonderful front three haven't been put under pressure for a long time.

"There were question marks about him with the amount of money.