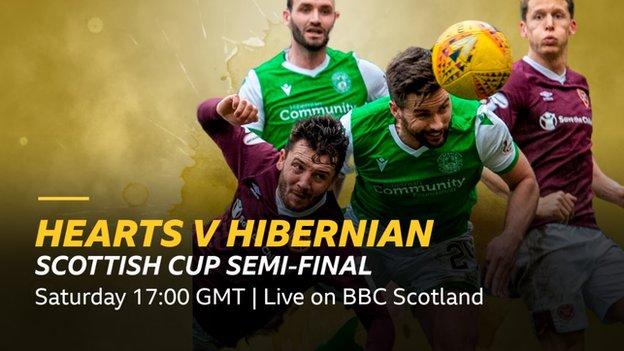 Michael Stewart and Shelley Kerr will join Rob MacLean for live BBC Scotland coverage of the Scottish Cup semi-final between Hearts and Hibernian.

Liam McLeod and Billy Dodds will commentate, with coverage starting at 16:00 GMT on the BBC Scotland channel.

The best of the Edinburgh derby - and the day's Scottish Premiership action - will be on Sportscene at 19:30.

Highlights of Sunday's semi-final between Aberdeen and Celtic will be on Sportscene at 19:15 on BBC Scotland.

Steven Thompson will present those shows - which will both be repeated on BBC One at 23:45 - with Chris Iwelumo and Leanne Crichton joining him on Saturday and Richard Foster on Sunday.

You can also keep up to date with matches as they happen on BBC Radio Scotland's Sportsound and on the BBC Scotland website.

Richard Gordon will be in the presenter's chair for Sportsound on Saturday, with Jane Lewis at the helm of the Sunday edition.

And Off the Ball with Stuart Cosgrove and Tam Cowan will be on air from 12:00-14:00 on Saturday and Sunday.