It has almost been lost amid the swirl of discontent over their stuttering form, but Celtic stand just two games from completing a domestic clean sweep for the fourth season running.

The quadruple treble would be uncharted territory and so are the circumstances, with Sunday's Scottish Cup semi-final against Aberdeen held over from last season.

But as Neil Lennon's side try to make history on two fronts in two separate campaigns, has the quest for a 10th successive league title become the only thing that matters to them?

Going back in time to ease current problems

When Celtic secured their Scottish Cup semi-final place with victory over St Johnstone in early March, the team were soaring. They had recorded 11 consecutive domestic wins and another treble was uppermost in fans' minds.

The League Cup was already in the bag and the Premiership trophy subsequently nestled beside it when Lennon's team were crowned champions of the truncated campaign.

Their dominance remained intact. Yet, almost seven months later, the landscape has changed.

Celtic head to Hampden on their worst run of form in six years, with Thursday's 2-2 draw against Lille a fourth game without victory.

That sequence - which began with a chastening 2-0 derby defeat by Rangers - has left them six points behind their Old Firm rivals, albeit having played a game fewer. That gap could be nine by the time they are next in league action.

The pressure has been ramped up in the all-consuming quest for title number 10 and Lennon this week went public with his dissatisfaction at "media driven" hysteria over Celtic's form.

What's clear is his side need a win. Any win. So the stakes are raised for Sunday's cup tie as they seek to go back in time to last season to solve their troubles of this term.

Former Celtic manager Martin O'Neill, though, says the importance of the quadruple treble has "absolutely" been diminished.

O'Neill, who delivered the treble in 2001 among his seven trophies at Parkhead, said: "Ten in a row is exactly what it's all about this year.

"It is the main focus for Celtic, simple as that. Every point that Celtic drop, you'll have someone criticising the result or the performance."

While adamant the current rut does not represent the toughest challenge of his two spells as Celtic boss, he can ill afford a fifth winless game.

Momentum is key this season. Lose to Aberdeen on Sunday, and the knock-on effect could spill into their Premiership title defence.

So it may be the case that the quadruple treble still matters because it is intertwined with the bid for the 10.

Lennon, relishing the trip to an empty Hampden in these strange times, says: "It's weird having to play a competition from last season this season.

"It's a priority because we don't want this run of trophies to end. It's testament to the players' consistency - they've earned the right to be in a semi-final again.

"They have a fantastic cup record and will be desperate to maintain that. No other club has done what these players have done in the past three or four years and that shouldn't be forgotten."

What stands in the way? 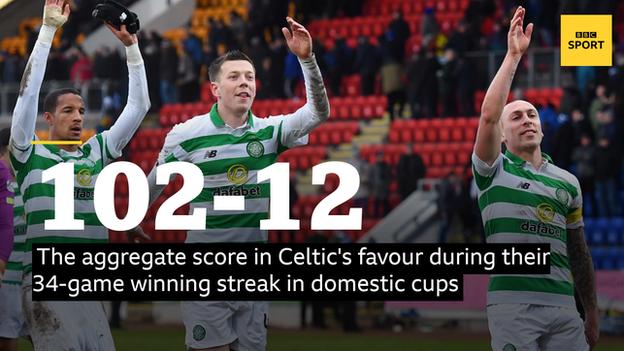 To move within one victory of the quadruple treble, Celtic must extend an astonishing British football record of 34 successive wins in cup ties.

Under Brendan Rodgers and latterly Lennon, the Glasgow club have been unbeatable in domestic knockout competition since a Scottish Cup semi-final loss to Rangers in 2016.

It is a streak drenched in goals, with Celtic scoring an average of three per game - 55 in 18 Scottish Cup matches and 47 in 16 League Cup ties.

Aberdeen - the joint most common opponent along with Rangers and Partick Thistle - have been dispatched four times, once in a semi and three times in finals.

The most celebrated of those came in the 2017 Scottish Cup as Tom Rogic's injury-time goal secured a 2-1 win and a treble in which Celtic didn't lose a game.

But having pushed Lennon's side close last Sunday - taking the lead twice in a compelling 3-3 Premiership draw at Pittodrie - Derek McInnes' men are determined to finally land a knockout blow.

And Celtic are without the talisman of their cup surge, James Forrest, who has played 30 of the 34 games, contributing 15 goals and nine assists, but is currently injured.

Lennon recognises Aberdeen's renewed threat, saying: "Derek McInnes has gone with a three at the back this season, which is different.

"He has good midfielders in the likes of Lewis Ferguson and the team are not as physical as they have been in the past. They try to play more and that should be conducive to a very good game."