A week after becoming manager at Birmingham City, Carla Ward realised she had taken on "project impossible" - and she was ready to resign.

There were just eight senior players in training when Ward arrived in August, after eight had left the club, including captain Kerys Harrop and England international Lucy Staniforth.

The club had not made any new signings and had finished second-bottom of the WSL the season before.

According to Ward, players were "crushed", "haunted" and "some didn't want to play football".

"A lot of them thought the team was going to fold this season. That was the reality," she told BBC Sport.

"I asked them on day two to send me their expectations for where they believed we would finish as a squad. A couple of them said bottom. It wasn't a good place to be when I first came in, that's for sure."

Since then, Birmingham have reached an FA Cup semi-final and won two of their six Women's Super League matches - a feat almost unthinkable two months ago.

It was capped off by Ward picking up the manager of the month award in October.

And Birmingham's biggest test could be next - a local derby against promoted Aston Villa on Saturday (14:30 GMT kick-off), one of three WSL derbies across women's football weekend.

'What have I got myself in for?' 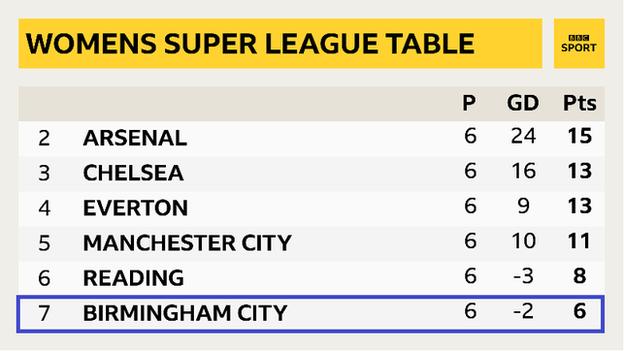 Ward had three weeks to buy players, build a squad, have a pre-season and prepare the team for their WSL opener against Brighton on 6 September.

"I knew going into it that it would be tough," she said.

"I was scratching my head thinking 'is the job too big?' We needed to bring in about 10 players in two weeks."

By the end of August, Ward had signed three players - Scotland captain Rachel Corsie on loan and midfielders Chloe McCarron and Christie Murray.

Time was running out before the Brighton game and Ward said she "almost resigned after a week".

She said: "I had a few honest conversations with the club and I said it was 'project survival' when I came in, but if certain situations transpired, it was now going to be 'project impossible'.

"We needed the bare minimum to bring people in. It was a case of trying to manipulate deals and get some favours off other teams to help us out. I could feel myself getting grey and thinking, 'what have I got myself in for here?'"

'We were still weeks behind'

During that first week, Ward had a list of priorities which included:

"Before I got into my car to drive to Birmingham on the first day, they were the things I wrote down. In games, we might be the second best team on paper but we needed to be working harder than them," she said.

"We needed to make the players push boundaries and hurt like they had never hurt before so that when we went out there on match day, it became a little easier."

Birmingham lost 2-0 at Brighton but there were players in the squad who had not trained yet. They only had four substitutes - two of whom "were actually injured". A deal to sign former Manchester United midfielder Mollie Green had also taken longer than expected.

"We didn't get Mollie Green's registration over the line in time either," Ward said. "It showed we were still weeks behind everybody else.

"The first thing I did was come off the pitch and say to the general manager, 'this is why we need more bodies'. I hadn't even got to the changing rooms!"

'We know we have to enjoy it'

Three weeks later, Birmingham returned to Brighton for the 2019-20 FA Cup quarter-final and won in a penalty shootout.

They won their first of three successive matches 11 days later at Blackburn.

Striker Claudia Walker has now scored four goals in four games, while new signings Corsie, Green and Murray all netted in the 4-0 win over Bristol City.

"Confidence and belief is high but we have to be careful," Ward said.

"We have liked the underdog status but if we carry on doing what we are doing, we won't be the underdogs for much longer.

"The girls are thriving on the fact that nobody gives us a chance and I certainly am. The players are just enjoying themselves and playing with a smile on their face - that's half the battle.

"We know we have to enjoy it now because it's going to be a long, tough season and challenges lie in front of us."