After a trying week for Celtic, Neil Lennon and his team lurch into a potentially season-defining one.

Defeat by Rangers, defeat by AC Milan and the ache of relinquishing a victory in the dying seconds against Aberdeen paints a gloomy picture for the club's supporters.

Lennon has said they are going through a tough spell and a few players are short of confidence. That will happen at a club such as Celtic when they don't win the sort of games in which they've fallen short over the past week.

And it's not just about those defeats; there's so much talk about the formation and other things. The poor performance against Rangers, the domination they had, the shape that was a shambles, the first half against Milan, then the change of formation despite still losing, then sticking with a back four against Aberdeen to then lose a goal in injury time.

It's an emotional rollercoaster. That's why this week, with Lille away in the Europa League then Aberdeen in the Scottish Cup semi-final on Sunday, it's just huge. I know it's the Scottish Cup from last season, but it could be massive for the club because of what has happened.

That result against Aberdeen feels like a defeat due to its circumstances and time will tell whether it's points dropped or a point gained. But, if they can get two victories from their next two matches, it will start to feel like the ship is steadied. Otherwise, it will seem like another step on a downward trajectory.

If Rangers had dropped something against Livingston, it tones it down, but that wasn't the case. It's early days in the season, of course it is. But the performances in Old Firm matches against Rangers will be a worry when it comes to clawing back points.

It feels like the pressure in those games are huge. Whenever we get to the next one, even if Celtic are performing well and having turned the corner, there will still be that bit in the back of their mind that Rangers have had their number in recent games.

'Brown still has a huge role to play'

A lot of the focus before the game, and after as well given how it panned out, was the decision to rest Scott Brown from the start.

He is at the age where you can't expect him to be playing 60-plus games a season, 90 minutes after 90 minutes. The management have to tailor how often he plays and when - and it's just so noticeable because it's off the back of two defeats.

They need to plot out the calendar and look at the games where he can step away for a rest and target the games he can make an impact. If not, it diminishes the presence he has. Even if he's playing 35 games, he can have a huge role to play.

Celtic have such a difficult run, it's so hard to pick what would have been the best game to leave him out. Had they beaten Aberdeen, fans would have been saying "that worked out well". It's just unfortunate they've got so many difficult games back to back. 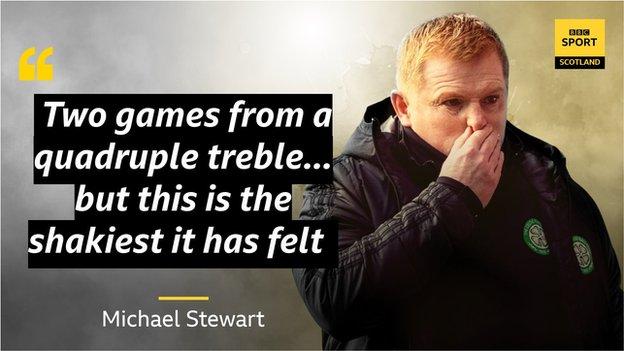 In terms of the Aberdeen game, it was a huge match for Celtic, make no mistake. Celtic huffed and puffed against a side set up to frustrate them, but even though Derek McInnes' side got two penalties, their second was a shocker defensively. Shane Duffy didn't deal with the ball, Kristoffer Ajer wasn't tight enough to Sam Cosgrove, Scott Bain palms the ball and Ryan Hedges turns it in. I expect Derek to set the team up to do the same in next week's colossal tie.

People can't forget Celtic are still two games away from a quadruple treble, which would be unbelievable. It's so strange because it's last season's competition sandwiched in the current campaign, but, given current form, you have to say this is the shakiest it's felt.

The way Celtic are at the moment, they are fragile. Aberdeen will be going into that game thinking they've got a real chance.