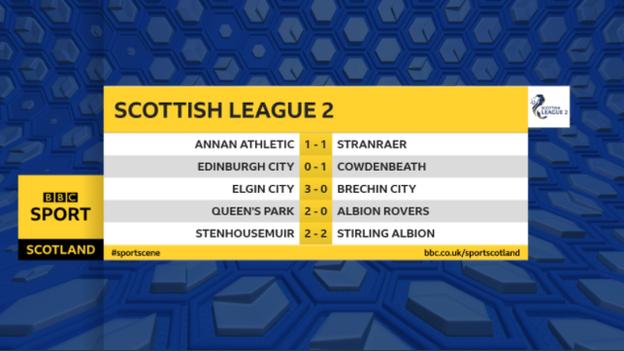 Elgin City capitalised as they moved top with a 3-0 win over bottom club Brechin City at Borough Briggs.

Annan Athletic were held 1-1 at home by 10-man Stranraer.

Queen's Park saw off visitors Albion Rovers 2-0, while Stirling Albion scored a stoppage-time equaliser to draw 2-2 away to Stenhousemuir.

Cowdenbeath, thumped 3-0 at home by Annan last week, had David Cox dismissed in the 33rd minute for dissent.

But they rode the storm against a City team rated among the main title contenders and snatched victory when Bradley Smith scored 12 minutes from time.

Elgin replaced Edinburgh at the top and heaped more woe on Brechin as a double from Kane Hester followed Brian Cameron's opener to seal a comfortable victory.

Second-placed Annan had a man advantage when Stranraer's Grant Gallagher was red carded midway through the first half. But the visitors took the lead through Andy Stirling and it required a long-range effort from Owen Moxon to give Annan a point.

And Jack Leitch was Stirling's late hero with an injury-time equaliser at Stenny. Stirling had led through David Wilson's free-kick but two goals in the last 15 minutes from Botti Biabi and Greig Spence looked to have swung the points the hosts' way.