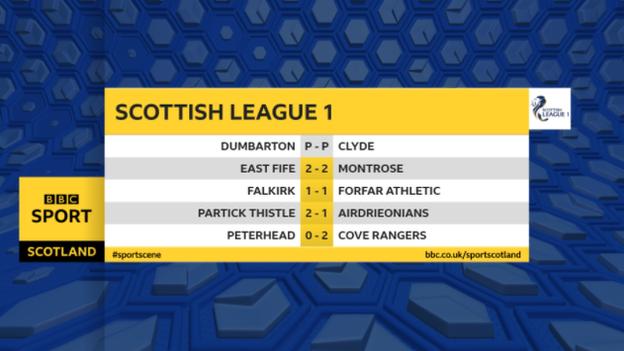 Cove Rangers are the only team in Scottish League One yet to drop points after they won 2-0 at Peterhead.

Falkirk lie second after a 1-1 home draw with Forfar Athletic, while Partick Thistle gained their first victory with a 2-1 defeat of Airdrieonians at Firhill.

Dumbarton's home game against Clyde was postponed because of a waterlogged pitch.

Cove captain Mitchel Megginson scored from the edge of the box in the 33rd minute to hand his side the lead at Balmoor.

That was extended by Harry Milne, who cut inside after the break to drive home a low ball and secure the win.

Falkirk went in front against Forfar though Anton Dowds, but the match turned in the 66th minute. Robbie Mutch was red carded for an off-the-ball incident and Jordan Allan converted the penalty to leave things even at full time.

Ian McCall's Thistle hit back from behind to edge out Airdrie. Brian Graham quickly levelled after Dale Carrick's opener and Blair Spittal sealed victory in the 60th minute.

East Fife were cruising after Jack Hamilton and Kevin Smith had them 2-0 up inside the half hour. But Montrose's Lewis Milne quickly cut the deficit and Graham Webster's second half spot-kick rescued a point.