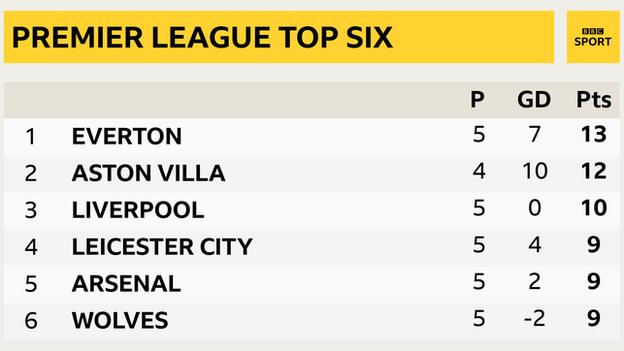 The top of Europe's main five leagues have an unfamiliar look this season.

The only teams with 100% winning records are Aston Villa and AC Milan - but who else is upsetting the established order, and what has happened to Europe's giants? 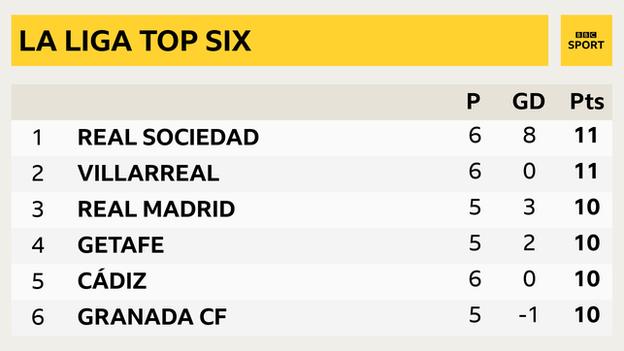 With off-field problems at Barcelona and financial issues at Real Madrid (who didn't buy any new players in a summer for the first time since 1980) this was always going to be an unpredictable season.

It had been 20 years since Real and Barca both lost on the same day without scoring, but that's what happened last Saturday as they were beaten by newly promoted Cadiz and Getafe respectively. Saturday's El Clasico will give one side a chance to redeem themselves.

Many see this as a great chance for Europa League winners Sevilla to break into the top two, but even they've had an average start. Atletico Madrid, the only unbeaten team in the league, still don't look totally convincing despite the arrival of Luis Suarez.

So could leaders Real Sociedad and second-placed Villarreal sustain an unexpected title challenge? Squad depth could be an issue, and both will have to hope key players stay healthy.

Central defenders Raul Albiol and Pau Torres are crucial for Villarreal, where ex-Arsenal boss Unai Emery is restoring his reputation.

A rare defeat for all-conquering Bayern

Bayern Munich were on a 23-match winning run - and 32 matches unbeaten - until they lost 4-1 to Hoffenheim last month. Still, the German and European champions are second.

It seems bizarre to think the treble winners had weaknesses going into this season but they did according to head coach Hansi Flick.

But, worryingly for their potential title rivals, the business they did on transfer deadline day seems to have plugged the gaps. Marc Roca added to the numbers in midfield. Bouna Sarr is a good back-up for Benjamin Pavard at right-back. Douglas Costa is the fourth winger Flick said he needed, and Eric Maxim Choupo-Moting provides decent cover up front.

So it's hard to see how anybody will stop them claiming a ninth successive Bundesliga title.

Elsewhere, RB Leipzig don't seem to be missing Timo Werner too much after his move to Chelsea.

The fact a full-back/wing-back - Angelino, who is on loan from Manchester City - is the club's top scorer tells you all you need to know about Julian Nagelsmann's attacking, progressive style. But despite his tactical intelligence, it's hard to see them having enough to sustain their challenge. 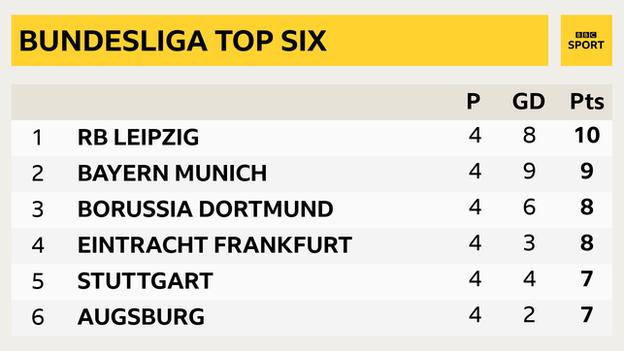 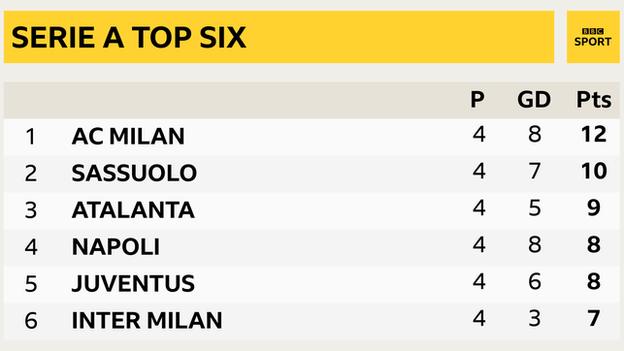 Last Saturday will have increased AC Milan's confidence they can finally have a season to be proud of again, seven years since they last qualified for the Champions League and nine years since they last won Serie A. Not only did they secure an impressive victory in the Milan derby, but last season's top four all failed to win.

It's very early days, of course, but the Rossoneri are building on the momentum they created at the end of last season when they won nine of their 12 Serie A games after the restart.

Juventus are, of course, still title favourites despite an unconvincing start under their big name but inexperienced head coach Andrea Pirlo. Napoli look strong again, Atalanta are still playing thrilling football and you can't write off Inter Milan, despite some worrying defensive issues. And Sassuolo could go top if they beat Torino on Friday.

But if Milan can keep the evergreen Zlatan Ibrahimovic fighting fit, there could be some real drama at the top.

Lille have made a strong start but the assumption is it's only a matter of time before Paris St-Germain race away at the top and stroll to yet another title - their eighth in the past nine seasons.

PSG had a sluggish start because of a Champions League final hangover, a number of players testing positive for coronavirus and some key injuries. Things aren't going smoothly off the pitch, though, with head coach Thomas Tuchel appearing to fall out with sporting director Leonardo over player recruitment.

When it comes to signing players, Lille are a lesson for many clubs across Europe. Nicolas Pepe,Victor Osimhen and Gabriel have all been sold for huge profits in the past two years, but the team has continued to improve.

Their local rivals Lens are up near the top, too.

They have some of the most passionate fans in the country and were title winners in 1998 but spent the past five seasons in Ligue 2. French football could do with them becoming a major force again. 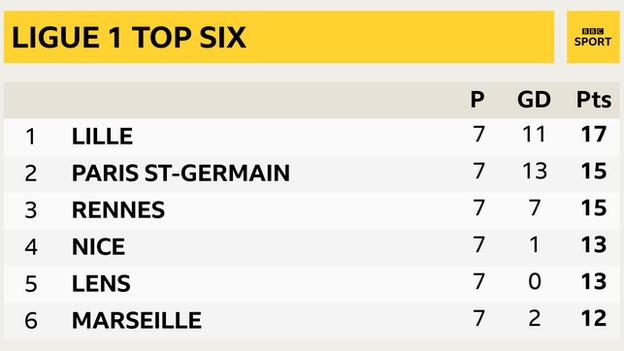