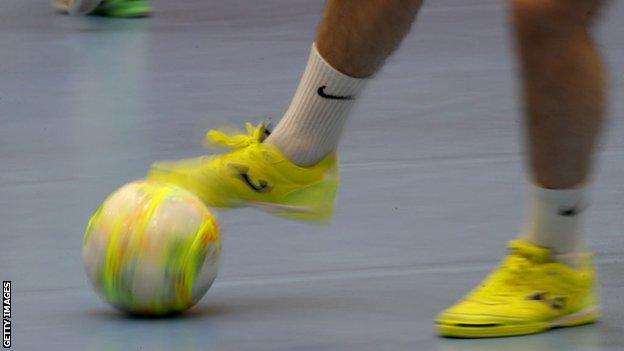 The Football Association's decision to axe England's futsal teams is "an attack on the sport", says the men's senior side.

The national governing body said funding for elite teams would end because of "unavoidable" budget cuts associated with Covid-19.

It also said money for grassroots futsal would be significantly reduced from this season onwards.

But the move has sparked anger among England players.

They are "devastated" and "in shock" and are seeking answers from FA chief executive Mark Bullingham and technical director Les Reed.

Futsal is a small-sided indoor football game which uses a heavy ball to help improve skills and close control.

Portugal forward Cristiano Ronaldo and Brazil's Neymar are among elite players who have credited the sport in helping them develop as players.

The FA's decision means that men's senior, under-23 and under-19 teams will all be scrapped as well as a commitment to creating a women's team ahead of the delayed 2021 European championships.

It launched a six-year plan for the sport in 2018 but now says it had to "prioritise core functions that serve English football and also have a duty to support our men's and women's senior teams in their efforts to win major tournaments".

In a statement, the men's futsal team said: "We cannot comprehend why futsal, with one of the smallest budgets across the organisation, has received a near 100% cut.

"We have serious concerns about how this decision was made and the lack of transparency in this process is worrying.

"This is not simply a budget cut but a total collapse of an international player pathway and an attack on futsal as a sport."

The FA said: "Covid-19 has had a significant impact on the FA and as an organisation we are currently planning for potential losses of approximately £300m.

"We have to prioritise our core functions that regulate and serve English football and also have a duty to support our men's and women's senior teams in their efforts to win major tournaments.

"This has led to difficult financial choices, but ultimately has forced us to focus more than ever on our key priorities."